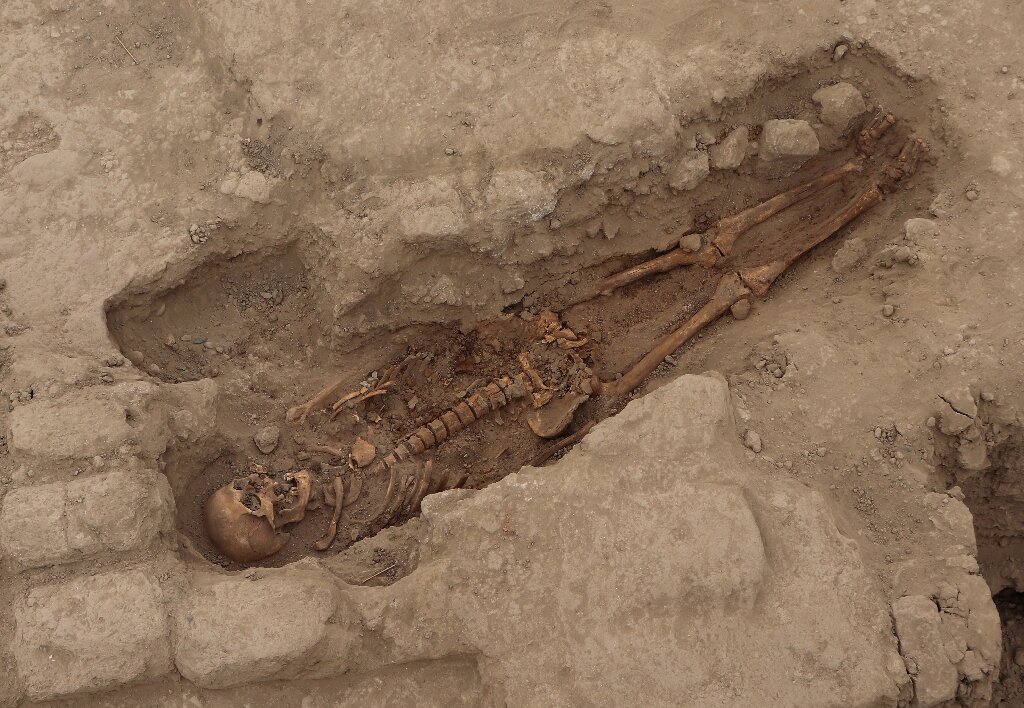 The Royal Tombs of Sipan Museum released an undated handout photo of one of the 29 human remains found at an ancient ceremonial site near Lambayeque.
The lead researcher stated that a team of archeologists discovered the remains of 29 people in northern Peru, including three children. This could be used to help experts rewrite history of the pre Incan Wari civilization.

The skeletons were found in Huaca Santa Rosa de Pucala (750 km north of Lima) more than 1000 years ago. This ancient ceremonial center is located in the coastal region Lambayeque.

Edgar Bracamonte, the principal researcher, stated that the burials of three children and a teenage at the temple's front indicated that they were human sacrifices in Wari culture.

Bracamonte said that this is the first discovery of Wari civilization far away from their influence.

Bracamonte stated that these discoveries allowed them to rethink Lambayeque's history, particularly the links to Wari occupations and Mochica occupations.

From the seventh century onwards, the Wari culture thrived in central Peruvian Andes.

Built between 800 and 900 AD, the Huaca Santa Rosa de Pucala enclosure is in the shape of the letter "D".

Bracamonte said, "We found a temple of ceremonial worship with 29 human remains. 25 belong to the Mohica era while four belong to the Wari culture."

The Mochica or Moche culture was developed between 100 and 700 AD along the northern Peruvian coast.

The remains of 25 Mochica were discovered in clay tombs and burial chambers within a temple. Researchers also discovered pieces of pottery, the remains of camelids, such as alpacas and llamas, and guineapigs.

The 2006 discovery of the fifth-century Lady of Cao mummy from the Mochica culture was one of the most important. It showed that the civilization had female leaders.

Experts consider the 1987 discovery of another mummy (the third century Lord of Sipan) one of the most important archeological discoveries of the past few decades. The main tomb was intact and unaltered by thieves.

‘Genetic fossil’: intact DNA from woman who lived 7,200 years ago discovered in Indonesia

1,500-Year-Old Lovers Uncovered in China, Locked in an Eternal Embrace