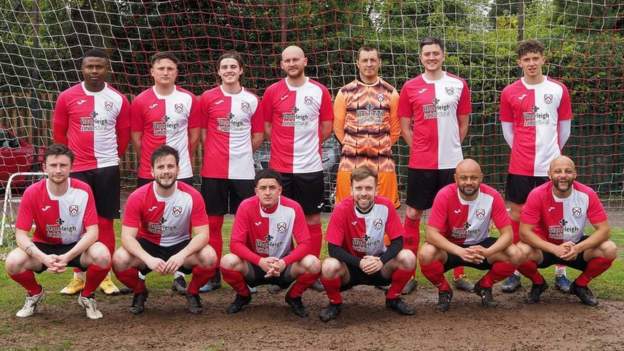 Two Midlands football teams at lower levels set a new English shootout record with 44 spot-kicks. This was accomplished in less time than it took to drive to the chip shop and back.

The previous record was 34. It was held jointly by Oxford United and Chelsea Under-23s in the EFL Trophy and Taunton Town against Truro City, in the Southern League Challenge Cup.

Their JW Hunt Cup tie was tied 3-3. Leo Gill scored a late equalizer for the hosts. Old Wulfs then won 19-18 in a shootout that lasted nearly half an hour.

"I went to get the chips"

Jack Marsh, the left-back for the home team and the son of Old Wulfs chairman Simon Marsh, scored the winning penalty.

Simon, proud father, almost missed it when, halfway through the thrilling finale, he had the nerve to drive half a kilometre to the chip shop to pick the players' post-match meal order.

"After the 22nd penalty, I went to get the fish and chips for the team. The shootout was still ongoing when I returned. I returned in time to witness the penultimate saved one, and then Jack scored his.

After the five penalties, it was 4-4. We had two chances to win the sudden death game, but they were missed.

Old Wulfs' win in the penalty shootout 19-18 earned them a meeting with Shifnal in round two of JW Hunt Cup.

Since 1926, the JW Hunt Cup has been in existence. All proceeds go to the Sedgley-based Beacon Centre of the Blind and Partial-sighted. The final is played at Molineux, the home of Wolverhampton Wanderers.

This game also had a Wolves connection as it was played in Castlecroft, which is now the CKW Stadium. It is also home to Old Wulfs' neighbor AFC Wulfrunians. It was once the training ground for Wolves.

The JW Hunt Cup joined other cup competitions by allowing extra time to go directly to penalties for the first season. This resulted in a hectic night for Danny Tipton of Old Wulfs (Goalkeeper) and Lane Head's Tom Kirkpatrick (Goalkeeper).

Simon Marsh said, "They were the real heroes."

Only four penalties separated the record for the world record of 48 when KK Palace defeated Civic 17-16 in Namibian Cup.

It earned Old Wulfs, West Midlands League Division One, a tie against Shifnal Town in the second round of the Midland League Premier Division.
penaltieshuntheadcuplaneenglishspotkickssimonjwoldwulfrunianswulfswentshootoutrecordbeat
2.2k Like