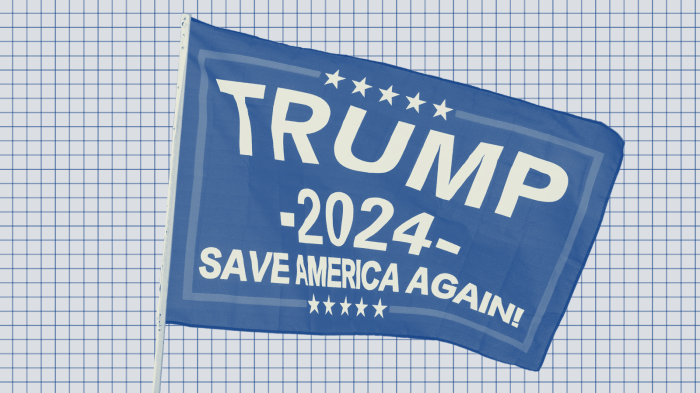 Pollapalooza is our weekly polling roundup.
Former President Donald Trump appears to be planning to run for the presidency again in 2024. He is currently on the road, holding rallies and participating in GOP politics. According to reports, he was on the brink of declaring his candidacy last summer but advisers convinced him not to do so to keep him from being restricted on TV appearances and fundraising.

One thing is certain: Trump would be running for the Republican nomination. He is still very popular with Republicans.

Quinnipiac University's Oct. 15-18 poll found that Trump holds a favorable rating of 86 percent and a negative rating of just 10 percent among Republican adults. He is already leading early polls for the 2024 Republican Primary. From Oct. 8-11, a Morning Consult/Politico poll found that 47% of Republican voters would vote to elect Trump. No other candidate had more than 13%. While you should always take any early poll like this one with a grain, it is a good sign for Trump's chances of becoming the nominee. Trump's powerful influence within the GOP means that few Republican politicians would dare run against him.

A large majority of Republicans want Trump to run again. Morning Consult/Politico found that 67 percent of Republican registered voters believed Trump should run again. This includes 51 percent who stated that he should certainly run. Similar results were found in a HarrisX/The Hill poll, which was conducted Oct. 13-14. It showed that 77 percent of Republican registered voters supported Trump's third consecutive candidacy, compared to 23 percent for the Democrats. This includes 52 percent who strongly supported it. Quinnipiac also found that 78 per cent of Republicans want to see Trump run again and that only 16 percent wouldn't.

Additionally, Republicans may be more eager to see Trump's return as the time goes by since Trump's presidency ended. Quinnipiac had found that Republicans were in favor of Trump's presidential run in May. It was 66 percent to 30%, now it is 78 percent and 16 percent. Morning Consult/Politico has not asked this question before. However, they have asked it previously whether Trump should have a major, minor, or non-existent role in the Republican Party. Morning Consult has not found as much support for Trump than Quinnipiac. However, in their most recent poll, 63% of Republican registered voters voted for a major role, 19% said a minor, and 13% said no role. This is slightly higher than the 59 percent who wanted him playing a major role in February, when 18% said he had a minor role and 17% said he had no role. But not all pollsters agree that Trump's desire for more is increasing. HarrisX/The Hill found almost no change in their survey from Nov. 17-19 2020.

The American electorate is less enthusiastic about a Trump return than Republicans. The Hill/HarrisX poll showed that 53 percent of registered voters opposed Trump running again. This is compared to 47 percent in the most recent HarrisX/The Hill survey. The idea was opposed by independents at 58 percent and 42 percent, respectively. Morning Consult/Politico showed a wider margin (59 percent to 35%, with independents opposing 58 percent and 30 percent respectively) and Quinnipiac (58% to 35 percent for both adults and independents). Quinnipiac also offered some more inauspicious numbers for the ex-president, such as his 39 percent to 52 percent overall favorable/unfavorable ratings and the fact that Americans felt, 51 percent to 41 percent, that he has had a mainly negative impact on American politics.

These numbers don't mean that Trump will lose the 2024 general elections. Although it is too early to make any predictions about 2024 general-election polls (it's still too early), a Selzer & Co./Grinnell College poll from Oct. 13-17 showed that 40% of 2024 voters would vote in favor of President Biden and 40% would vote for Trump. These numbers can change over time, but it is not unreasonable to assume that Biden will win reelection by a wide margin, even if he runs again.

Wednesday's announcement by the Biden administration was made as part of the Food and Drug Administration's review of Pfizer and BioNTechs requests for authorization for their COVID-19 vaccine for children under 12. The vaccine would allow for approximately 28 million additional children to be eligible if it is approved. Parents with children under 18 may find this plan a relief. According to a Morning Consult poll, 45 per cent of parents said that they would have their children vaccinated as soon they were eligible.

Pete Buttigieg, Transportation Secretary, has been criticised for taking paternity leaves after the birth of his twins in august. This has sparked a debate about whether fathers should have the right to leave work. Public polls show that more American fathers take care of child care. Pew Research Center found that fathers spent on average 8 hours per week caring for their children in 2016, up 5.5 hours from 1965. Many fathers may also be happy to have paternity leave. In fact, 63% of fathers with children younger than 18 said they felt they were spending too much time with their children. Furthermore, 62% of these fathers stated that work was their reason for not spending enough time with their kids.

Due to Senator Joe Manchins opposition, Biden's most ambitious climate plan, which aims to replace gas- and coal-fired power plants with renewable energy sources will likely be cut. However, this move may upset some voters. Vox/Data for Progress polls found that 63% of likely voters support incentives for companies that meet clean-energy performance targets and penalizations for those who don't.

Americans are divided on whether the United States should prioritise the economic or environmental impact of infrastructure investments. According to an Ipsos survey, 37% of Americans prefer prioritizing the environment and 34% prefer the economy. Ipsos has found that satisfaction with U.S. infrastructure has fallen to a five year low. Sixty-one per cent of Americans believe that we as a nation are not doing enough in order to meet our infrastructure requirements.

Our average poll of generic congressional ballots shows that Democrats lead Republicans by 2.6 percentage points (44.1%) to 41.6% (see chart). A week ago, Democrats outnumbered Republicans by 2.9 percentage points (44.4 percent to 41.5%). Last month, the vote for Democrats was 2.6 points higher than it was at this point (43.8 percent to 41.2%).
americanspresidentrunvotersactivelyrepublicanrolepollratingquinnipiacrepublicansmajoritytrump
2.2k Like