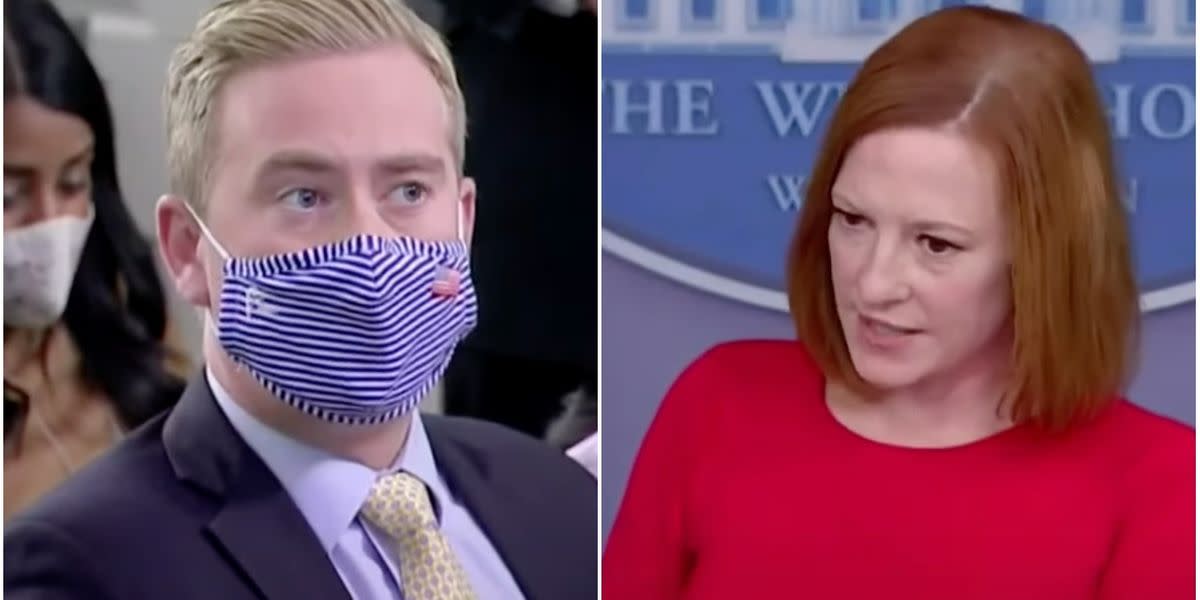 Fox News White House correspondent Peter Doocy appears to take pride in asking tough questions of Jen Psaki, White House press secretary.
Psaki, however, was the one to ask a question on Tuesday that rendered Doocy speechless for a moment.

Doocy asked Doocy about the possibility that tons of military personnel and police officers could quit to get COVID-19 vaccines.

Psaki interjected by asking where exactly this is taking place.

She asked, "Where are the thousands of military and police officers who have quit their jobs?" (A Massachusetts police union has unconfirmed claims that large numbers of officers have resigned over vaccine requirements. Other police departments have also reported shortages in staff, but this issue predates the introduction of vaccine mandates.

Doocy responded by quoting Alex Villanueva from Los Angeles County, who speculated that 5-10% of his employees could leave the job if forced to get vaccinated for the coronavirus.

Psaki responded with her own question. She asked, "What was the most common cause of death for police officers last year?" What do you know?

Doocy did not immediately respond so Psaki answered her question.

She spoke out about COVID-19. That's something we are trying to address and that police departments are also working on. Take Seattle, for example. I have seen some of the reporting and 92% of the officers are vaccinated. 93% of firefighters are also vaccinated.

Doocy claimed that his question was about safety.

He added that there are other issues such as terror, murder, robberies and kidnappings. Are there concerns that the United States and localities might not be properly equipped if their police force shrinks or the size of its ready military force shrinks?

Doocy was then reminded by Psaki that COVID has claimed the lives of more than 700,000. It is the leading cause of death for police officers and departments.

She said that it is something we should consider seriously. Departments work to save their employees. We support this effort.

Below is a link to the exchange:

Jen Psaki asked Peter Doocy what was the most common cause of death among police officers last year. He was speechless. pic.twitter.com/UtuzN1wTu4 Aaron Rupar (@atrupar) October 19, 2021

@pdoocy, it is inevitable to grow tired of being dunked on. https://t.co/85QPSWoT5e Terry Kinney (@RealTerryKinney) October 19, 2021

The strength I needed to get through my day was watching Jen Psaki humiliate Peter Doocy by trying to push right-wing propaganda. https://t.co/OxbghbdAoY Zack Hunt (@ZaackHunt) October 19, 2021

I will place ALL MONEY IN MY Pocket that Doocy thought "[the n word]" in answer to this question but he choked it back because his career was still on the line. https://t.co/5TJGfZgAEO Elie Mystal (@ElieNYC) October 19, 2021

It's so funny when @PressSec interrupts Doocy’s stream of BS propaganda and pushes a fact down his throat. He could even read the numerals on his digital watch with his sex. He must be a glutton to punish. https://t.co/2yqqxLr7ks Steve Silberman (@stevesilberman) October 19, 2021