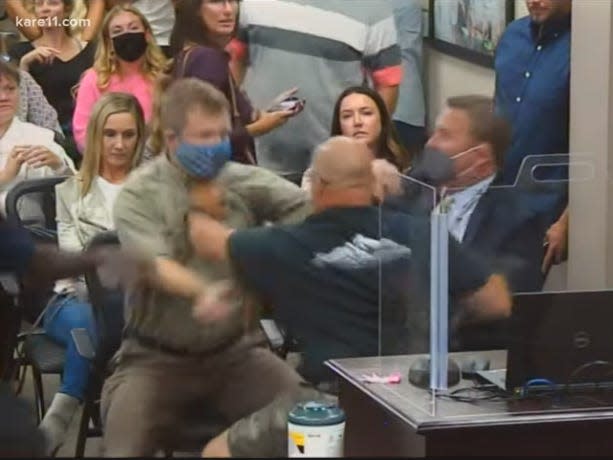 Video from the September 27 meeting showed a man grasping another masked parent by his collar.

According to KARE, the prosecution claimed that the man was upset because his parent favored a mask mandate.

Local reports say that a parent was charged with assault after he allegedly grabbed the shirt and phone of a masked Minnesota man at a heated Minnesota school board meeting.

According to KARE 11, the prosecution claimed that Thomas Wayne Kahlbaugh (47) was unhappily with Jonas Sjoberg. Sjoberg was a parent who spoke out in support of Eastern Carver County School district's new mask mandate. KARE 11 was told by witnesses that Kahlbough grabbed Sjoberg's cell phone and dragged him across a room, before two more men intervened.

A livestreamed video from the September 27th school board meeting showed Sjoberg being grabbed by the collar by a man who was grabbing his phone out of his hand. KARE 11 reported that Sjoberg attempted to take a photo of Kalbough using his phone and that he had planned to notify the school board about Kalbough's threats.

Sjoberg told WCCO that his daughter attends a private school. However, he was there to inform the board that he doesn't believe that the large number of people who spoke out against the district's mask mandate are representative of the community.

KARE reports that Sjoberg told police that his shirt was cut and that he might have been scratched in the altercation.

In a statement dated September 28, the school district stated that it will increase security presence at its board meetings in future to address safety concerns.

The statement stated that "The behaviour and conduct displayed in our boardroom this Week was unacceptable." "It's healthy for us all to disagree and seek more information. It is unacceptable and wrong to resort to violence against decision-makers or to accuse them of being Nazis.