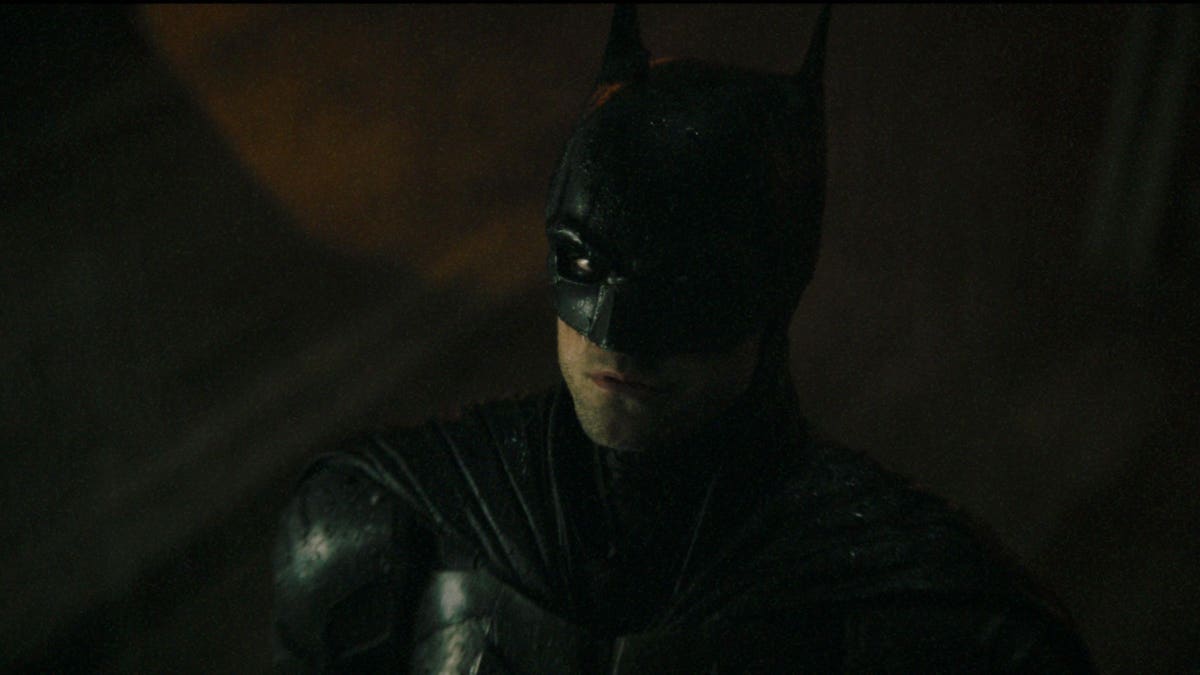 This looks just like a Batman movie. This looks more like a Chris Nolan Batman movie. Robert Pattinson sounds a lot like Christian Bales Bruce Wayne (close the eyes and they'll sound almost identical), Andy Serkis sounds not unlike Michael Caines Alfred and certain moments (Batman lifting himself up on the grappling hook, Batman fighting thugs in dimly-lit clubs) are not just tropes from the mythology, but were staged and filmed in a way that reminds you of Batman Begins or The Dark Knight. The first shot of Batman (at 02:42) is shot from the same angle as Val Kilmers thumbs up moment Batman Forever. This could be a coincidence, or a subtle indication that Matt Reeves has an eccentric sense of humor.

The Batman and Matt Reeves are being sold as a grimdark detective tale with a young, enraged Caped Crusader facing organized criminals and another, scarier type of lone-wolf baddie. The scenes we see remind us of Chris Nolan's first two Batman movies. It isn't as drastic as switching from Tim Burton's macabre camp carnage to Joel Schumachers psychedelic comedy camp to Chris Nolans grounded and plausible cops-n-robbers adventure story. The Batman looks more dark than Batman Begins. This was itself a grimdark remake of the 1989-1997 Batman photos.

Pattinson appears less in control than Bales' comparatively clinical superhero, who is known for his focus on crime bosses or supervillains. He resembles young Bruce Wayne in the anime-influenced The Batman episodic, which was a five-season series that featured a rookie Batman encountering supervillains. Although his one-time yelling at The Riddler is not as convincing as any of Bales McGruff's Crime Bat hysterics, I am more interested in seeing his Bruce Wayne. After all, it was Bales Wayne who made the Nolan movies successful, and not his Swear To Me! Caped Crusader. His outbursts and the handmade suit along with the real-world car only serve to make the film seem smaller. However, it can also negate tension.

After Cloverfield, Let Me In, and the Apes reboot trilogy, Matt Reeves is given the benefit of doubt. This trailer looks a lot like other Batman movies. Paul Danos Riddler and Colin Farrells Penguin were all present in at least one live-action Batman movie. Selina Kyle was also seen by Michelle Pfeiffer and Anne Hathaway in 2012. Robin Lord Taylor's crime boss Penguin was essentially a co-lead on Foxs Gotham for five season. This is not necessarily an artistic consideration. Commercially, however, there might be a limit to a grisly Batman crime mystery. It may not have much to offer other than another grimdark Batman movie.

Remember that Nolans only praised Batman Begins as a dark Batman movie. It earned $371 million worldwide in the summer 2005 and raked in $205 million domestically from a $72 million Wed Sun debut. That was seven years ago, when Batman & Robin flopped the franchise. It earned $238 million worldwide and received poor reviews. The $160 million budget for Batman & Robin was $160 million. The Batman will arrive five years after Justice League's not-exactly-beloved ($659m on a $300m budget) put DC Films on the defensive. This is in addition to A) a Flash movie starring both Ben Afflecks Batman as well as Michael Keatons Batman, and B) The Batman looking more like a darker and gritty version of Batman Begins. Think less Casino Royale, and more Amazing Spider-Man.

It is unlikely that a Batman movie (especially one that doesn't have any movie stars, sorry Paul Dano), will feature the main villains and whose costumes aren't always comic-book-accurate. There is no reason to be concerned if the movie is well-budgetted and provides entertainment that isn't tied in with any other Batman movies. A solo Batman movie (which is a more common franchise than 35/65 in domestic/worldwide), starring a Batman with two other Batmen in the same year, and featuring real-life versions of villains played by non-stars, is not a concern.
batmannolansmillionmattwaynegrimgrimdarkteasesmoviereevestrailerdarklooksreboot
2.2k Like