UCLA anesthesiologist, vocal against COVID vaccine mandates, is escorted out of workplace 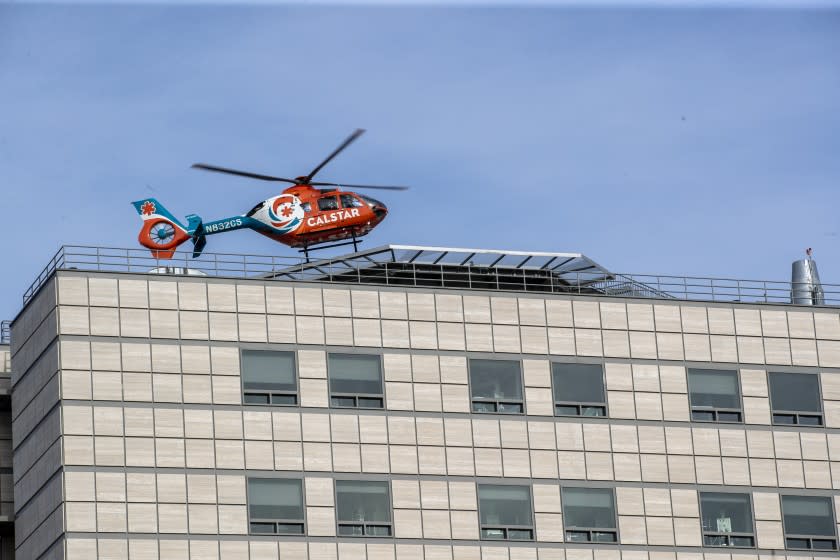 Ronald Reagan UCLA Medical Center is visited by a medevac helicopter. (Robert Gauthier / Los Angeles Times)
UCLA anesthesiologist, who was vocal in his opposition to the COVID-19 mandate for vaccines, was removed from his work place Monday after he tried to enter the building without being vaccinated.

Three people are seen escorting Dr. Christopher B. Rake out of Westwood's 200 UCLA Medical Plaza by Rake in a video he apparently captured himself.

This is what happens when people stand up for freedom, when they show up to work willingly, even though they aren't vaccinated. They don't realize that I will risk my job, my paycheck, freedom and even my life to make this happen.

Rake has spoken out about his beliefs in the past. He was captured speaking at an anti-vaccination rally held in Santa Monica on Aug. 29 about his opposition to the California order of Aug. 5, which required that all healthcare workers be vaccinated against COVID-19 no later than Sept. 30, 2009. Citizens United for Freedom, an anti-vaccination group was founded by Rake in opposition. Rake says to the crowd in the video that they want to force me into a vaccine or other treatment. They tell me to take the jab, or we will take your job. I'm here to say no. This is not okay.

UCLA Health stated in a statement, that all active employees who are not located in the United States must be vaccinated. The statement stated that those who are not in compliance will be subject to progressive discipline. This could include restricting access to work places and taking leave.

It is not clear what Rake was subject to as a consequence. Rake didn't respond to a request to comment.

UCLA Health employees must receive the flu vaccine annually and provide documentation that they have been immunized against certain diseases, including rubella, measles and meningitis.

Students were required to have the flu and COVID-19 vaccinations this year.

Rake encouraged people not to ask for exemptions from the vaccine at the anti-vaccination rally on Aug. 29. Rake claimed that asking to be exempted from the vaccine was agreeing to the totalitarian lie of some other group having authority over your body.

UCLA Health responded to Rake's video at the rally and stated that his comments were not representative of its views.

Rake earned his medical degree at Tufts University School of Medicine and completed his residency in 2009 at the UCLA Medical Center. Since 2010, he has been a board-certified physician in anesthesiology.