Indian Wells: Emma Raducanu says it has been a 'very cool three weeks' since US Open win 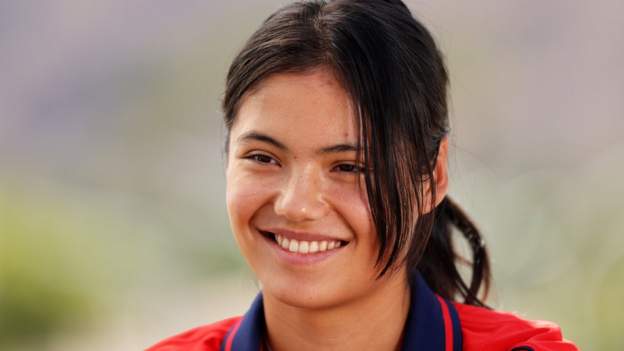 Last update on. From the section Tennis
Raducanu was present at the James Bond premiere last Wednesday

Emma Raducanu said it was "pretty cool", to be congratulated by other Indian Wells players, but now is the time for her to get back to work.

The 18-year-old US Open champion has been granted a bye into the second round at the BNP Paribas Open in California, where she is the 17th seed.

In her first match since New York, she will be facing either Maria Camila Osorio Serrano of Colombia or Aliaksandra Ssnovich from Belarus.

Briton commented on the compliments from her peers, "It's really lovely."

"All of the players are friendly. It's still a new tour for me, so it's very exciting.

"But I haven’t really spent too many time hanging around. "I've been working and learning, then going on to other things."

Raducanu was the first to qualify for a Grand Slam singles title and has been to the Met Gala as well as the London premiere of James Bond's new film.

She said, "It has been a very cool 3 weeks. I was able to see and do things I never thought possible.

Raducanu currently doesn't have a permanent coach as she decided not to extend her short but extremely successful partnership with Andrew Richardson.

She is being assisted by Jeremy Bates in Indian Wells, who works alongside the British number six Katie Boulter as a Lawn Tennis Association national coach.

Raducanu stated, "Jeremy is part the women's tennis team at the LTA, therefore while he’s here, he’s helping me out."

"But moving forwards, I'm going to wait until I find the right person. I won't rush to make any decisions. I want to make the right choice.

"I am just looking for general things in a coach. You can get along well with someone and push you.
rightcoolwintennisemmaindianwellsgoingweeksthingsprettypremiereraducanuopenimreally
2.2k Like