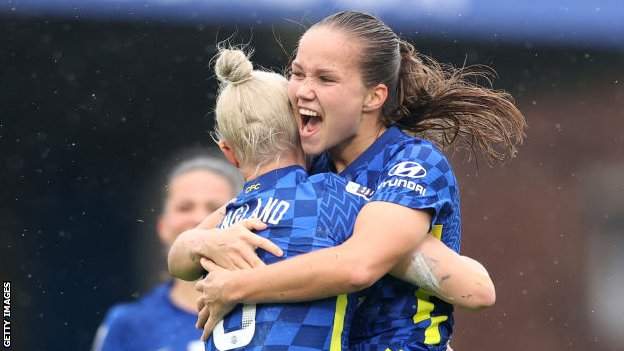 Last update on. From the section Football
With a powerful strike from the corner, Guro Reiten set Chelsea off on their way

Guro Reiten gave hosts a well-deserved lead by executing a drill finish from the corner.

Sam Kerr was the one to head Fran Kirby's ball over Megan Walsh, doubling the Blues' lead in the second half.

Emma Hayes' team lost their first league fixture of the season in the corresponding fixture. However, they were all over Brighton right from kick-off and should've broken the deadlock before Reiten's early start.

Pernille Harter sent Millie Bright's ball wide of the far post, and Kerr missed a shot on target. However, Reiten was quick to make a break for Kirby's pass.

As the Blues continued to make a strong attack on the Brighton goal, Kerr, Kirby, and Reiten were constantly at their backs. Reiten shot straight at Walsh, Kirby nodded wide, and the Australia international finally headed home Chelsea's second.

Hope Powell's team was upbeat in the second period and cut the deficit with Carter's goal from close range. This was the first home goal Chelsea had conceded in the WSL for eight hours. Kirby's third assist allowed England to win the game and beat Walsh.

Chelsea is now second in goals scored and Arsenal is third. The Gunners will play at Aston Villa on Saturday.

Emma Hayes, Chelsea manager: "It should've been done and dusted much sooner. Although we had some good transition moments during the first half, I still thought it was a great performance.

"I think the team had good opportunities, but I don't believe we executed them well, especially in transitions. Guro Reiten gave a magnificent performance. She was truly exceptional today.

"I'm particularly pleased for Beth [England]. This will increase her confidence and do great things for her.
startfinecontinuecampaignhalfgoodwalshchelseateamheadedkirbysreitenwslkerrbrightonalbionchampionshove
2.2k Like