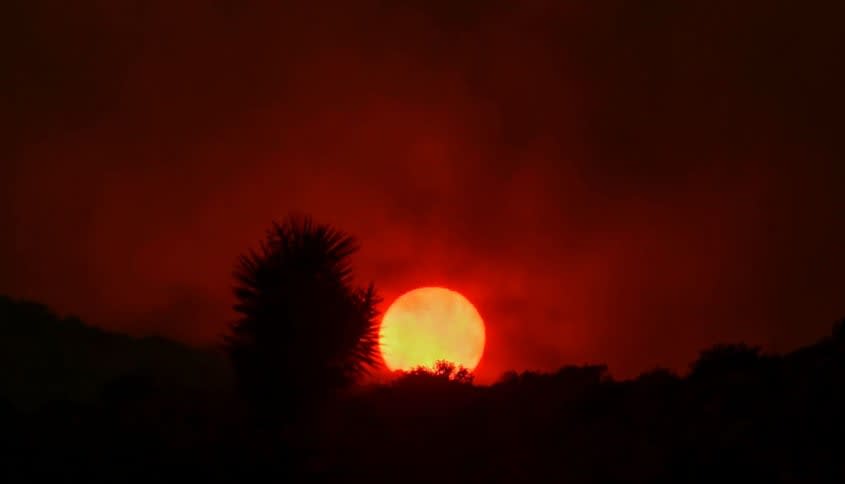 Mojave desert sunset. FREDERIC J. BROWN/AFP via Getty Images
Another evidence that we live in a simulation is the attack on special operations soldiers at an airport in Mojave Desert by a "sword-wielding man dressed up as a Ninja" and their wounds. They were forced to hide in a hangar Stars and Stripes reports.

Stars and Stripes reports that the bizarre incident occurred sometime after 1 AM on Sept. 18. This is according to what appears to have been a military incident log shared on Instagram and Reddit. Ridgecrest Police Department records confirm that some details from the social media documents suggest that the victims were a staff sergeant and captain who were members of the "160th Special Operations Aviation Regiment," an elite helicopter unit known under the name of the Night Stalkers.

The photograph report does not verify that the staff sergeant was outside smoking cigarettes when "an unknown individual wearing full ninja garb" approached him. He asked "Do you know me?" Do you know the whereabouts of my family?"

According to the report, the soldier answered "no" and the "person wearing ninja clothes began to strike at him, striking his phone as well as his knees and legs." The staff sergeant ran and the man dressed in a ninja costume began to kick and punch doors and windows. He then reportedly threw an asphast block through a window. According to social media documents, the captain was inside and remained by the block.

The victims dialed 911 and the "ninja", allegedly fled to be arrested elsewhere, reportedly fled from the victims. Continue reading at Stars and Stripes.

Marine Raiders, Navy SEALs and PJs: What You Need To Now About Air Force, Marine and Navy Special Forces