and how is their World Cup defence shaping up? 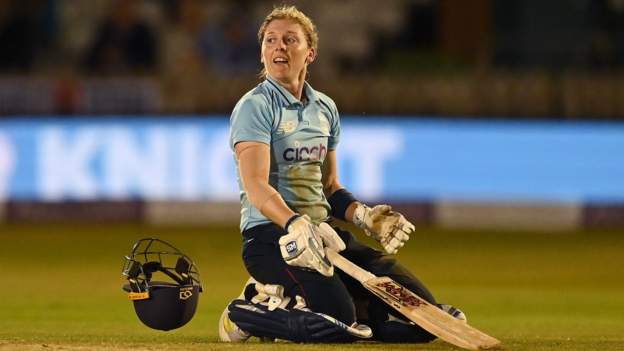 It has been an extraordinary summer for women's cricket here in England.
England's home summer ended with a draw in England, six wins from their eight one-day internationals, and two losses from their six Twenty20 matches.

The Hundred was also introduced this summer, with most of the women's games drawing huge crowds. This gave players like Alice Capsey or Maia Bouchier the opportunity to perform on a larger stage.

What have we learned this summer? How is England's World Cup defense shaping up?

The potential of women's test cricket is enormous...

The first home Test England had against an opponent outside of Australia was at Bristol this summer, which was seven years ago.

Although the build-up was marred in part by the fact that the women wouldn't be playing on a new pitch - an oversight which the England and Wales Cricket Board later regretted - the cricket itself was excellent for the most part.

Sophia Dunkley's unbeaten, sparkling 74 set the stage for a summer where she grew and grew as an athlete and, most importantly, saved the game from England, who were in serious trouble when she got to the crease.

The summer's battle, Shafali Verma against Katherine Brunt, started in that Test. It was hard not to be impressed by the brilliance and bravery with which the 17 year-old India batter made her Test debut.

England performed well in this Test. England's fielding was excellent, Sophie Ecclestone shined with the ball, and their batting displayed a quiet aggression that is missing from the Women's Ashes series.

There is a lot of interest in women's Test cricket with India facing Australia at the end September.

If they are given the right pitches, then that's great!

But we cannot rest on our laurels

The women's game has seen a tremendous amount of growth this summer at both the domestic and international levels. This must be seen as an opportunity to grow and not the end of the sport's potential.

The Hundred women's contest attracted a large crowd. The fact that matches were held at major grounds like the Kia Oval or Lord's helped to convey that The Hundred is an equality competition.

England has not played at Lord's in an international match since winning the World Cup 2017. This is wrong. It is not true. This summer has shown that there is a demand for England to play at these venues as often as their male counterparts.

The multi-format series proved its worth in England's series against India. Every match had something to it, whether it was pride or points, and it gave rise to a narrative thread.

It's a shame that the New Zealand series didn't follow a similar structure. This is especially true considering most of their players have not featured in Test matches since 2004.

It would be a bitter disappointment to see Suzie Bates, a world-class player who has done so much for women's cricket and the White Ferns, go through her entire career without playing in the Test whites.

The multi-format series is not without its merits. However, the growth in women's cricket England bodes well. It is vital that other countries don't get left behind.

It's easy to feel a bit nostalgic about your lost youth, especially when Alice Capsey is only 16 and tearing down attacks in The Hundred.

Capsey is part a new generation that has benefited from the professionalization of the women's sport.

Charlie Dean, an off-spinner, made her England debut in September against New Zealand. Tash Farrant, a left-arm seamer, was also successful in The Hundred, and Rachael Heyhoe's Flint Trophy. England has more attacking bowling options after Tash Farrant lost her central contract in 2019.

Players have struggled to bridge the gap between domestic and international cricket.

However, the domestic standard is steadily improving. It all started with the Kia Super League. The standard has been steadily rising over time. With The Hundred, players have access to large crowds and bigger venues before they make their England bow.

Even though England won both their ODI series this summer, it was not an easy ride.

The batting is still a mystery. They fell to 145-9 against New Zealand, 59-6, and 71-3 before some brilliant innings by Heather Knight saved them.

They were also bowled out in five of six ODIs, where they batted first. However, New Zealand frequently let them off the hook when these collapses occurred. It is difficult to see Australia and South Africa as sides. They are confident, so it is easy for them to get away with these stop-start innings.

There are many positives. Kate Cross's exceptional form with the ball has earned her 15 wickets in seven ODIs this season and has made her England's first-change bowler.

Danni Wyatt seems more at ease batting at seven. This position gives her freedom to go out and just play her shots. Knight is also improving as a white-ball batter.

There is talent - but it is important that we remember that New Zealand matches occurred at the end of the longest ever season in which most of these players have ever played. England may still be able to defend their World Cup title, but it won't be easy.
worldtestplayersplayeddefencesummerenglandcricketshapingcupserieszealandwomens
2.2k Like