Fulham celebrate goal with fan Rhys Porter, 13, after he was abused online. 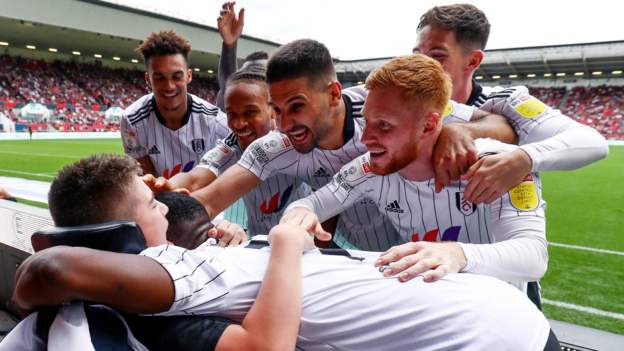 Fulham's Aleksandar Mitrovic won the match and their players ran to Rhys for their celebration.

After Rhys posted videos on social media showing his disability, the club made Rhys an honourary member.

Fulham helped arrange for Rhys's meeting with Tim Ream on BBC Breakfast, which was a moving experience.

After scoring at Ashton Gate, the club invited him back to join them.

Ream posted about the celebration on Twitter, writing: "Not Rhys Porter's result but another cool moment shared. Experienced."

Rhys spent the afternoon with the whole squad, participating in drills with keepers Marek Roak and Paulo Gazzaniga after his story won the hearts of all at the Championship club.

Fulham was shocked to hear about Rhys' abuse and said that they were inspired by Rhys.

"We wanted him to know how impressed we were with his ability to persevere in the face of adversity and his dedication to helping others.

Fulham is fourth in the Championship, four points behind leaders Bournemouth after Saturday's draw.
helpingfulhamreceived13goalonlinesaturdaysfanmomentporterabusedchampionshipcelebrateplayersrhys
2.2k Like