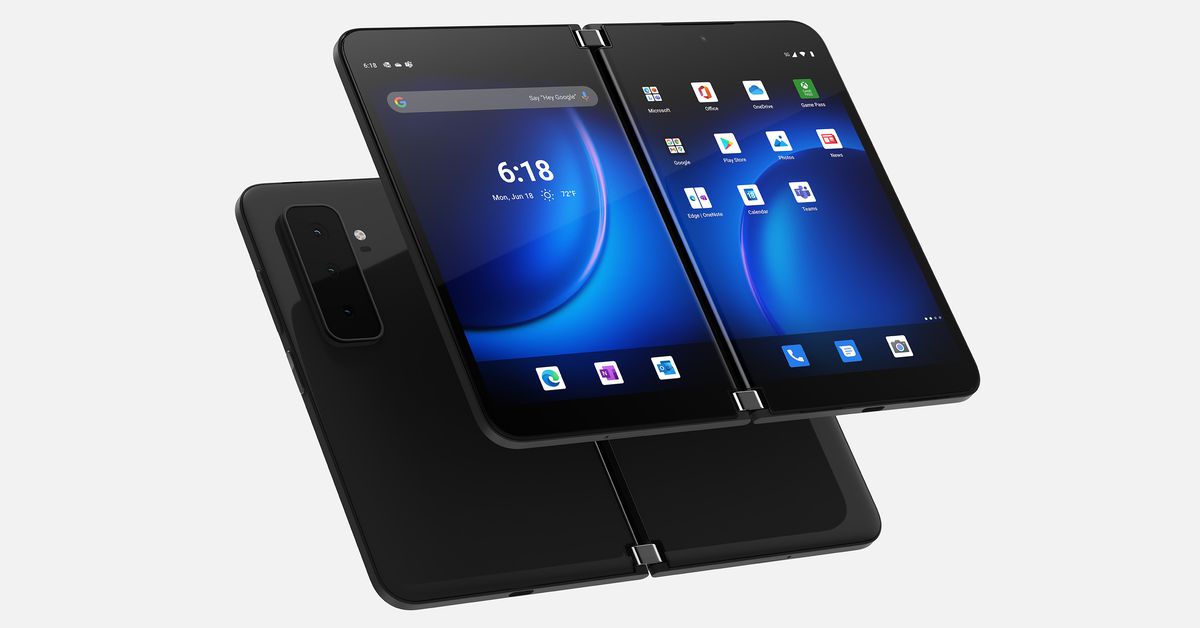 Microsoft has officially revealed the new Surface Duo 2. This is Microsoft's second attempt at an Android-powered foldable phone. While the Duo 2 retains many of our complaints, it also maintains the original design. Microsoft has added a legitimate camera to the Duo 2, supporting 5G and using a modern processor. They also offer larger screens that are very nice to have on high-end phones. Microsoft has announced that the Duo 2 will go on sale starting October 5th at $1499.99
Surface Duo 2 is available in white and black. It has two OLED screens measuring 5.8 inches by 1344 x 18.92 inches. The hinge allows you to open the Surface Duo 2 like a book, or prop it up like an umbrella. This is a very different approach than Samsung's folding phones that have one large screen and can be folded in half. The combined Duo 2 screens measure 8.3 inches diagonally. They also have a faster refresh rate of 90Hz. The screen curve allows you to view it even when the Duo 2 is closed. This shows you the time and any missed notifications. Corning glass is used to cover the screens.

The Qualcomm Snapdragon 888 processor is located in one-half of the device. This is a major upgrade to the 855 chip found in the original version. The device supports 5G connectivity. This is an upgrade to the 4G radio in the original Duo. Microsoft claims it is the thinnest 5G device available. NFC and Qi wireless charging are also available as hardware upgrades. These two features were missing from the original Duo. Microsoft has not yet specified the size of the battery, but claims that it will last for at least 24 hours.

The original Surface Duo came with only one camera, which was frankly terrible and one of its weakest points. Microsoft has now installed a three-camera system outside the Surface Duo 2. This includes a wide, ultrawide and telephoto camera systems. The resolution of all three cameras is 12 megapixels, and the wide and telephoto lenses also have optical image stabilization.

The Duo 2 supports pen input using Microsoft's Surface Pens, just like the previous Duo. Magnetically attach the Surface Slim Pen 2 to your Duo 2 so you can take it with you wherever you go.

The Duo product line is all about productivity. It essentially consists of two smartphones that are connected by a hinge. Microsoft claims it has improved the sharing of information between the two screens as well as spreading one app across both. According to Microsoft, 150 games including Asphalt Legends 9, Modern Combat 5 and Dungeon Hunter 5 can be used on one screen while the game is displayed on the other.

These promises were made for the first Duo. Software support was where it all fell apart. Although Microsoft's demos are impressive, they also did it the first time, so we will remain skeptical until we can actually test it.

Although the Duo 2 runs Android 11, the original Duo still has Android 10, and Microsoft did not indicate when the update might be available to 11. You can see our hands-on experience with the Duo 2 and stay tuned to our review.
screensfeatures5gsingleduomicrosoftmissingscreenwidemicrosoftssurfacelinecamera
2.2k Like