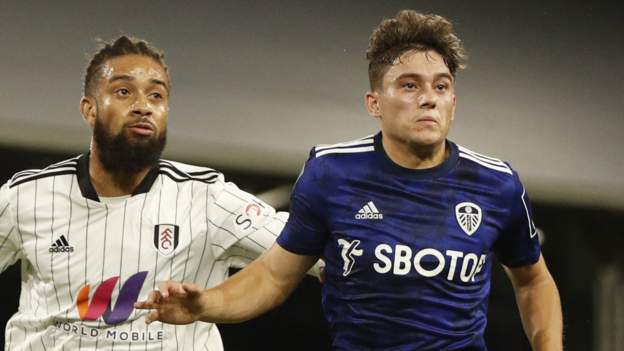 Daniel James was watching the birth of his baby boy in Manchester at lunchtime on Tuesday. It seemed impossible to imagine himself playing in London for Leeds later in the day.

The 23-year old did exactly that, and 21 September became a day he will never forget.

James, who had just played in Leeds' penalty shootout win against Fulham in Carabao Cup, said that his baby boy was born on BBC Radio 5 Live.

"Thank you to the manager that allowed me to be in Manchester for this. It was an amazing day for me, the Mrs. We were so proud of her, and it was late, which we couldn't change.

"The manager allowed me to do it so that I could be there for my baby's birth and to play in the game."

Fulham's third round tie began at 19:45 BST. James was in tight time.

Leeds has a lot of injuries and Marcelo Bielsa played a strong team for the game. Fulham had 11, while Leeds had only four. The Argentine was keen to make James available.

The Wales winger said, "The car would've been too long so I ended-up getting a helicopter." "An amazing story, and one that I will never forget.

"We don’t yet have a name, but will come up with one when we get back."

James joined Leeds from Manchester United on transfer deadline day for 25m. It has been a turbulent few weeks.
wingercupgameleedsmanchesterwinbirthdaybabyjamesfulhamplayedmanagerkickedcarabaodaddanplays
2.2k Like