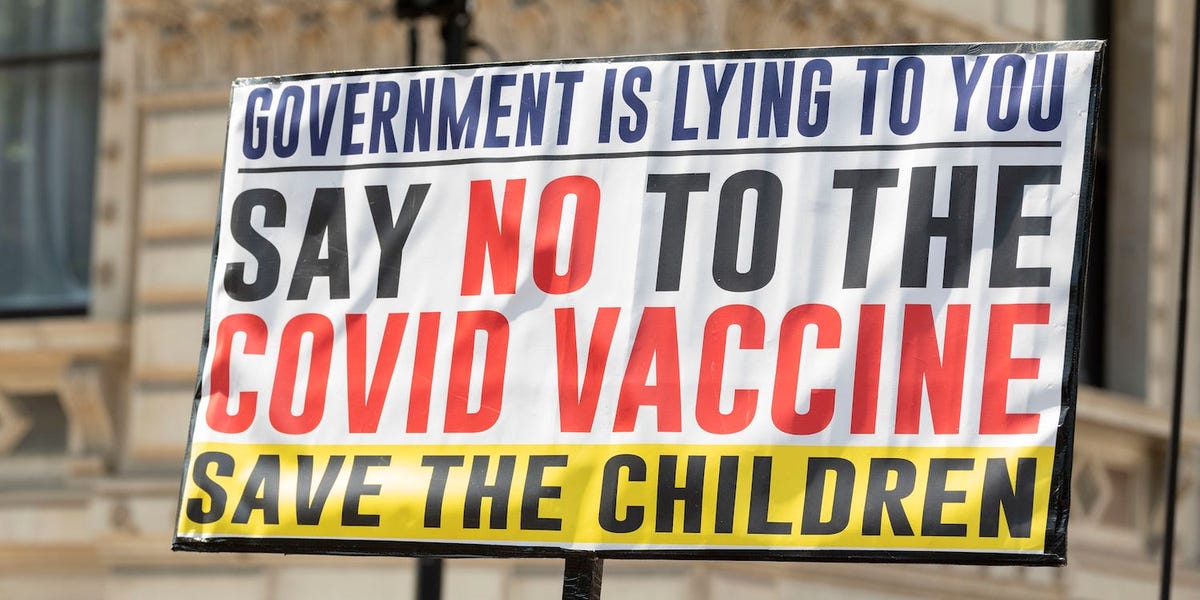 Anti-vaccine activists are dying from COVID, and their deaths are being celebrated.
This is a distraction, and it represents an acceptance of COVID’s death toll.

Anti-vaxxers don't need to be treated with kindness, but they should be challenged to prevent infection.

Abdullah Shihipar contributes to Insider as an opinion writer.

This column is an opinion piece. These thoughts are solely the author's.

It is a common story during the pandemic: A vocal anti-vaxxer ends up in the hospital with COVID-19. Calleb Wallace, 30, of Texas died from the disease after suffering a prolonged bout. After being put on a ventilator, Wallace, who was involved in anti-mask protests as well as the San Angelo Freedom Defenders, succumbed to the disease. Wallace left behind his wife and two children.

Sometimes, anti-vaccine posts on social media catch headlines' attention. Stephen Harmon, a Los Angeles man, mocked the vaccine repeatedly, tweeting "Got 999 problems, but a vax is a one" in June. He then died from the virus in July.

As the delta variant spreads quickly across the country, this trend is becoming more common. This has sparked a number of memes and jokes on social media. I have been guilty of a few "how is it starting, how it's going?" jokes. However, regardless of how cruel the memes target and how tempting it may be to indulge in the schadenfreude it is an unhelpful distraction which represents a dark reality: how many people are currently dying from COVID-19.

Making light of the darkness

Before I get started, let me clarify that this isn't an argument for empathy with those who are strongly anti-vaccine. It is not an attempt to understand their point of view. This is not an argument to convince anti-vaccine supporters. Unfortunately, some of them have fallen into a dangerous pit that their loved ones are unable to rescue them quickly. While being nicer will not necessarily make them happier, it won't change the fact that they are no longer loved by their family.

We were all scared 18 months ago when the virus struck the United States. As hospitals became overcrowded with dead patients, people made run to grocery stores. People spent their time at home trying to "stop the spread" of the virus and flatten it. Every death was seen by many as a tragedy that could be prevented with collective action. Within a few months right-wing governors and talk heads started to promote the notion that each person was responsible for protecting themselves from a pandemic. People could choose to wear no masks, skip vaccinations or attend social gatherings without the need for a vaccine. This was despite the fact that the virus can spread from one person to another. Naturally, the behavior of one person during a pandemic can have an impact on the health and well-being of others.

One year later, and with vaccines readily available, some left-leaning people have adopted the right's framing. It is now widely accepted that COVID deaths are mostly among the unvaccinated. It's possible that you could have chosen to receive that vaccine. But, that's not what I'm implying.

This prevents us effectively from taking more effective action to stop the spread of the virus by imposing restrictions and mask mandates on testings. Children who have not been vaccinated or are immunocompromised are at greater risk if we abandon a common framing of COVID-19. It is easy to forget that, despite all this, there are still many people who need help to get vaccinated. There are still people who are terrified of side effects and those who don't have the time.

We have seen headlines that focus on unvaccinated individuals who have died due to the virus blurred the lines between those in the anti-vaccine camp and those in the general public. People who aren't too busy or can't wait to see the effects of the virus, were either scared of side effects or were too busy.

We should not adopt the individualist framing of Republicans to fight anti-vaccine sentiment. We should demonstrate our support for mask mandates at city council and school board meetings and outnumber them. Advertisers that promote misinformation should be boycotted and pressured. We need to push for accountability measures from Facebook. Facebook has long allowed anti-vaccine misinformation to be posted on its platforms.

We should also push for measures to stop the spread of the disease, such as mask mandates and vaccine mandates. Instead, tangible actions are being ridiculed.

People I've spoken with have lost loved ones to conspiracy theories against anti-vaccine. These people become increasingly isolated and shells of their families, and often act hostile and aggressive towards their own family members. It feels like families have been split apart for all eternity.

It is important to remember that family members feel two types of pain when their loved ones pass away: the loss of physical and emotional health, as well as the realization that they could have prevented their deaths.

Although it's hard to believe, laughing at mass deaths is a sign that we have given up on resisting mass murder and are now accepting its reality. Although it is tempting to believe that anti-vaxxers die in some way, this is just how the virus spreads. Anti-vaxxers are indeed dying. But this is just the reality of how a virus spreads. This humor is a distraction from the shame that our country is in at this late stage of the pandemic.

In the coming months, there will be many more anti-vaccine activists who die from this disease. I'm going not to laugh at it. We all are the real joke.
diseasespreadsmakingantivaxxersdiedvaccinedeathunvaccinatedindicationvirusantivaccinemandatesmaskdyingfunframingdarksurrenderedcovid19weve
2.2k Like