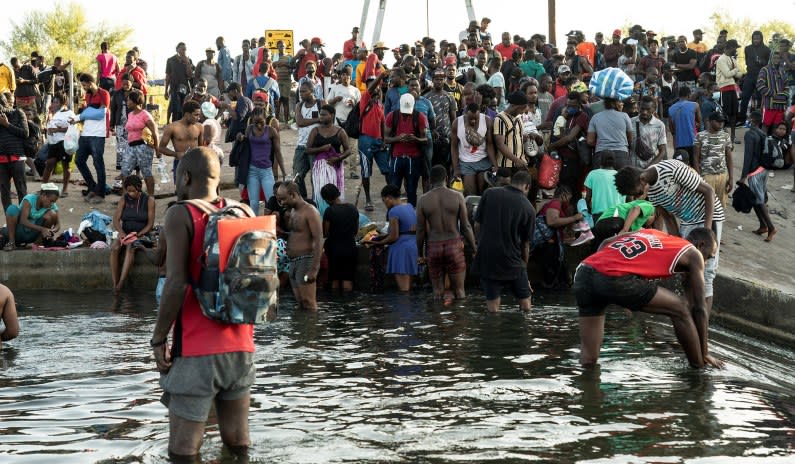 New footage from Del Rio, Texas, shows hundreds of illegal migrants crossing the Rio Grande into the United States. They join thousands of migrants already camping under the international bridge.
Fox News captured the scene on video during a ride in a Texas Department of Safety helicopter following the Federal Aviation Administration's grounding of drones in the region.

The video featured hundreds of people mostly from Haiti crossing a dam to get into the U.S. Then they follow a dirt path and join an encampment below the bridge, where up to 11,000 migrants await to be processed by Border Patrol agents. This is an increase from the 8,000 who were there on Thursday morning.

Since Wednesday's arrival of 4,000 migrants, the number of migrants in the camp has almost tripled. Agents from Border Patrol are having trouble processing new arrivals.

This footage was taken just one day after Tony Gonzalez (Representative from Texas) visited the camp. He stated that the situation was the worst he'd ever seen and that Im not taking it lightly.

Gonzalez tweeted that there was virtually no border and that migrants can freely travel between the U.S.A. and Mexico.

Bruno Lozano (Democratic mayor of Del Rio), called for the Biden administration's attention to the crisis. He stated that an open border poses a terrorist threat.

According to Joe Frank Martinez, Val Verde County Sheriff, the Border Patrol is overloaded. There is a backlog of individuals below the bridge because they can't process them fast enough. They are not held, but they are just waiting to be processed.

Customs and Border Protection stated that it would be sending more agents to the region to assist with processing migrants faster.

According to the Border Patrol, it is expanding its presence in the Del Rio Sector, and working with DHS and other federal, state, and local partners to address the current level migrant encounters. The temporary staging area under the Del Rio International Bridge serves as a shaded area while migrants are waiting to be taken into custody by the USBP.