Are we eating ourselves to extinction? 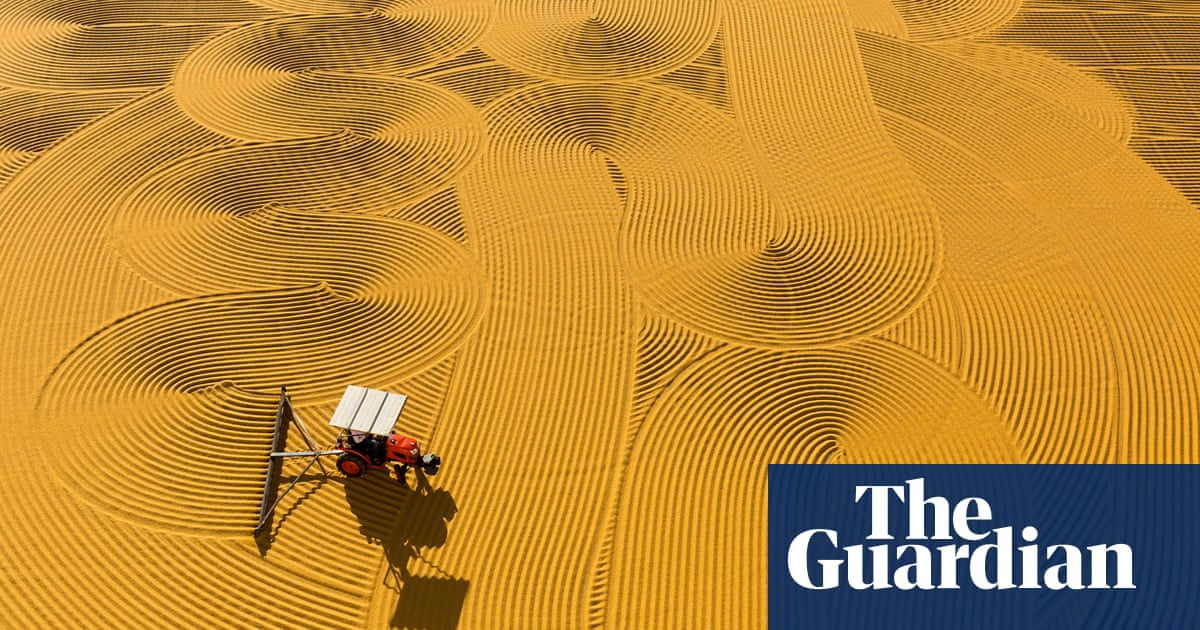 In the middle of eastern Turkey, in a field of golden fields overshadowed with grey mountains, I touched an endangered species. It was a long-term migration of its ancestors, who had evolved over millions years. It was an indispensable part of the daily life in these villages, but it was now too late. The farmer stated that there were only a few remaining fields. The farmer said that there were only a few fields left.
While most people may think that a field of wheat looks the same as any other, this particular crop was different. Kavilca, pronounced Kav-all jah, had transformed the eastern Anatolian landscapes into honey-coloured honey for over 400 generations (roughly 10,000 years). It was one the first cultivated foods in the world, and it is still one of the most rare.

All the fruits in one basket A banana plantation in Vietnam. Photograph: Quynh Anh Nguyen/Getty Images

How is it possible for a food to appear everywhere and be in danger of extinction? One type of wheat is not the same as another and all varieties are at high risk. We also need to be aware that some varieties may have important traits that can help us combat climate change or crop diseases. The mass extinction of our food is illustrated by the Kavilcas rare.

Our lives are becoming increasingly homogeneous in many areas. It is possible to shop at the same outlets, buy the same clothes and see the same brands around the globe. The same holds true for our diet. It has been possible to eat the same food everywhere we go in a very short time, creating an edible form uniformity. You might think that I eat more variety than my grandparents or parents. You can eat sushi or curry in London, Los Angeles, Lima or anywhere else in the world. You can also eat a banana, mango, or Budweiser and sip Coca-Cola or Budweiser. It may seem like a variety of foods, but it's the exact same diversity that is being spread around the world in an identical way.

These facts are important: The source of most of the world's food seeds are largely controlled by four companies; half the world's cheeses are made with bacteria or enzymes produced by one company; most global pork production, from the US to China is based on a single breed of pork; and perhaps most importantly, even though there are over 1,500 varieties of bananas, global trade is dominated only by one Cavendish.

Four corporations control most of the world's food seeds.

This level of uniformity is unprecedented. In the past 150 years, approximately six generations of humans have seen more changes in their diet than the entire last one million years (around 400.000 generations). One huge, unprecedented experiment is transforming the way we live and eat.

Human diets were extremely varied throughout most of our evolution as species. We evolved as hunters-gatherers, then farmers. Food was the result of a place. Crops were tailored to the particular environment. This was influenced by the knowledge and preferences of those who lived there, as well as the climate, soil and altitude. This diversity was preserved and passed on through the seeds farmers saved. It is in the flavours of fruits and vegetables, the animals they raised, and the bread and cheeses they made.

Kavilca wheat is one of few survivors of disappearing diversity. It has a unique history and a connection with a particular part of the world. This unique grain, which is perfectly suited to its environment and has a unique taste, was pushed to the edge of extinction only during our lifetimes. Similar fates are happening with many other crops and food. Because our survival depends on them, we should all be able to understand their stories and their reasons for decline.

The future of food is in the past: a field of Kavilca wheat, Turkey. Photograph: Dan Saladino

My journey into food journalism began during a time of crisis. It was 2008 and the world was focusing on financial turmoil in the banking system. However, there was a significant food story unfolding. The prices of wheat, rice, and maize were at record highs. They had tripled on the global markets when they reached their peak. Tens of millions of people living in poverty were driven to hunger by this. It also fueled tensions that led to the Arab spring. Protests and riots in Tunisia and Egypt led to the fall of governments and helped spark the conflict in Syria. People began to ask serious questions about the future food supply for the first time in decades. Crop scientists started telling the world that global crop yields must increase by 70%, despite having 7.5 billion people and 10 billion expected by 2050. It seemed like an indulgence to call for more diversity. We are now realizing that diversity is vital for our future.

This shift in thinking was evident at the September 2019 climate action summit, held at New York's United Nations headquarters. Emmanuel Faber, the then CEO of Danone, said that the world's food system, which it had built over the past century, was now dead. He said that science could alter the rules of life and the cycle of it. We could feed ourselves by monocultures, and most of the world's food supply could be sourced from a small number of plants. Faber explained that this approach is now bankrupt. We've been killing lives and now it is time to save them.

Faber made a pledge to preserve diversity, supported by 20 global food companies, including Unilever and Nestl, Mars, Kelloggs, and Kelloggs, which have combined food sales of approximately $500bn in more than 100 countries. Faber expressed concern at the fact that 99% of dairy cows in some parts of the country are Holsteins. He said that it was too simplistic now because of the global food system. There is a complete loss in diversity.

Emmanuel Faber, CEO of Danone, speaks at the Climate Action Summit held at the UN in New York in 2019 Photo by Stephanie Keith/Getty Images

Businesses that created and spread homogeneity in food should be voicing concern about lost diversity. We are only now seeing the enormity of what we are losing, but we can save it if we act quickly.

It is not an accident that food diversity has declined and many of the endangered foods are now in danger. In the years that followed the second World War, the greatest loss in crop diversity was when crop scientists discovered ways to grow grains like wheat and rice on an unprecedented scale in an effort to save millions of people from starvation. A small number of super-productive varieties were created to grow more food than the world needed. This strategy, which included more agrochemicals and more irrigation as well as new genetics, was known as the "green revolution".

The Hadza people of east Africa are among the last hunter-gatherers on the planet. Photograph by chuvipro/Getty images

It led to a tripled in grain production and a more than twofold increase in human population between 1970 and 2020. However, the downside to creating uniform crops is that they are more vulnerable to natural disasters. Global food systems that rely on a small number of plants are more vulnerable to climate extremes, diseases and pests.

The green revolution was founded on innovative science but tried to simplify nature. This is starting to backfire. We have lost thousands of resilient and highly adaptable varieties by creating identical fields of wheat. Too often, their valuable traits were lost. We are beginning to see that there was wisdom in the past.

The world has only nine of the more than 6,000 species of plants that humans have consumed over the years. Only three of these rice, wheat, and maize are responsible for half of the calories. You have 75% of the calories needed to fuel our species. A few foods are gaining prominence as thousands of other foods have been endangered or gone extinct. Soy is one example. It was domesticated in China thousands years ago. This bean was relatively unknown outside of Asia until the 1970s, and it is now one of the most widely traded agricultural commodities. Soy is a key ingredient in a growing homogeneous diet that billions of people eat. It can be used to feed chickens, cattle, pigs and fish. These global dietary shifts, which all point towards uniformity at an unprecedented level, are unimaginable.

Even though a human's diet was only a few thousand years old, it was much more varied than what we eat today. Peat-diggers found the remains of a man that had been killed or sacrificed 2,500 years earlier on the Jutland Peninsula in western Denmark. The man's stomach contained porridge made from barley, flax, and 40 seeds of different plants. The Hadza of east Africa are the last hunter-gatherers. They eat from a wild menu of over 800 species of plant and animal species. Although we cannot replicate their lifestyles in modern times, there are many lessons to be learned from them.

I don't advocate for a return of some halcyon past. However, I believe we need to consider what the past has to teach us about how the world will be inhabited in the future. The current food system is causing the destruction of the planet. One million species of animal and plant species are at risk. We clear vast forests to plant monocultures, then use millions of barrels of oil per day to fertilize them. We are farming in a time crunch.

While I cannot guarantee that saving endangered foods will solve all these problems, I do believe it should be part the solution. Kavilca wheat can survive in extreme cold and damp conditions that would make modern crops impossible to grow. Bere barley, a food that is so well adapted to Orkney's harsh environment, doesn't require any fertilisers or chemicals to grow. Murnong, a delicious, nutritious, and once plentiful root from south Australia, is a great example of how the world can learn from indigenous peoples about living in harmony with the natural world.

Wildlife is often considered to be endangered or at risk of extinction. The red list, which was compiled by International Union for Conservation of Nature in 1960, lists endangered and at-risk species. It is a compilation of these species (about 105,000 at time of writing), and highlights those that are at greatest risk of extinction (nearly 33,000).

The Ark of Taste, an italicized version of the red-list that is only dedicated to food, was created by Italy's Slow Food movement in the mid-1990s. It was created by a group who recognized that when a food, local product, or crop becomes endangered, so does a way to live, knowledge, and skill and an ecosystem. The Ark's call to respect diversity captured the imagination of campaigners, farmers, and cooks from all over the globe, who began to add their endangered foods to it.

The Ark of Taste currently contains 5,312 foods, 130 countries and 762 products. Many people have helped me save endangered foods. I was even able to meet the farmer who showed my the Kavilca wheat field. You are not the only one who is a champion in your area. You can also help by finding endangered foods in your region, such as local apples or local cheeses. These foods can be saved by you eating them. These foods are more than just food. These foods are history, identity and pleasure. Our future.