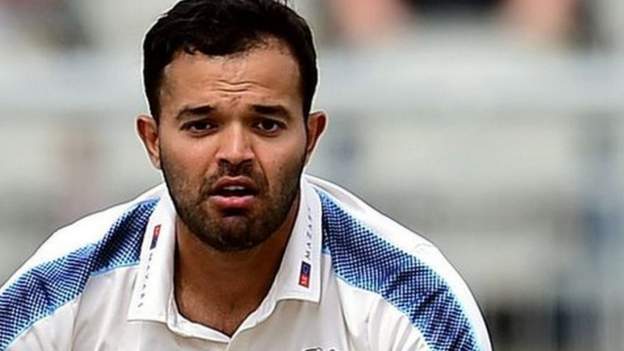 Last update on. From the section Cricket
Azeem Rafiq, a former England youth captain, captained Yorkshire in a Twenty20 fixture 2012

According to a report from his former club Yorkshire, Azeem Rafiq was "victim of racism harassment and bullying."

Rafiq (30) claimed that he was subject to "institutional racism" in the club, and that he was close to ending his life. External-link

An independent panel upheld seven of the 43 allegations against the player.

Roger Hutton, chairman of Yorkshire, offered his "profound and unreserved apology" to Rafiq & His Family.

Hutton stated in a statement that "there is no doubt that Azeem Rasiq, during the first spell as a player at YCCC was the victim of racial harassation." He was also bullied later.

Yorkshire has released a summary and recommendations of the panel's report, but stated that the full report cannot be released due to legal reasons.

What are the conclusions?

Yorkshire claims that the majority of allegations were not supported by "insufficient evidence".

The inquiry conducted 29 interviews with 26 witnesses. However, the club stated that "many individuals" refused to participate which "impeded its ability to make conclusive conclusions in one way or another".

These seven allegations were upheld:

Rafiq, who was playing junior cricket for Yorkshire at the time, was not allowed to eat halal food during matches. This is now fixed.

[Regarding the period before 2010, the panel discovered that former players used racist language in three separate instances, which was considered harassment on race grounds.

His second stint at Yorkshire, 2016-2018, saw jokes about religion that made people uncomfortable about their religious beliefs.

A former player made comments about Azeem Rafiq’s weight and fitness during his second stint at the club. This was considered bullying.

Azeem Rafiq raised racism concerns in August 2018. The club failed to investigate or follow its own policy.

The club could have done more before 2018 to make Muslims feel more welcome in their stadiums. They should also have addressed complaints of anti-social or racist behavior within the stadiums.

The report stated that Azeem was not included in a team or released from the Club for any other reason than cricketing.

Rafiq, who quit Headingley in 2018, stated in an interview with ESPN Cricinfo that he felt like an "outsider", as a Muslim, in September 2020.

Yorkshire received the findings on 13 Aug and issued a statement six days later stating that Rafiq had been "the victim of inappropriate behavior" and offering their "profound apologies".

Rafiq retorted by accusing the club's downplaying of racism.

After pressure from the cricket governing body and the select committee of MPs on Digital, Culture, Media and Sport, the findings were released on Friday.

The England and Wales Cricket Board requested a copy of the findings from the club. On Wednesday, MPs asked for the club's immediate publication.

The investigation published a list with recommendations and next steps for the club.

These include reviewing club policies and procedures for discrimination complaints, training on equality and diversity for club employees, fair and open recruitment, and better engagement with Yorkshire's minority communities.

The panel suggested that the club reach out to "senior Asian ex-professional players and community leaders to serve as role models and foster trust and engagement."

The report states that "hopefully this investigation review will and the recommendations will help Cricket become more inclusive in all its components for individuals regardless of their nationality, race religion gender age disability or experience."

The club stated that it will "now enthusiastically implement panel's recommendations" as well as "will seek to work with a wider group of diverse communities to further develop our inclusivity, accessibility, and sensitivity to modern Britain's pulse".
panelclubplayervictimfindingsfindsyorkshirebullyingreportrecommendationsazeemracialcricketharassmentreleasedrafiq
2.2k Like