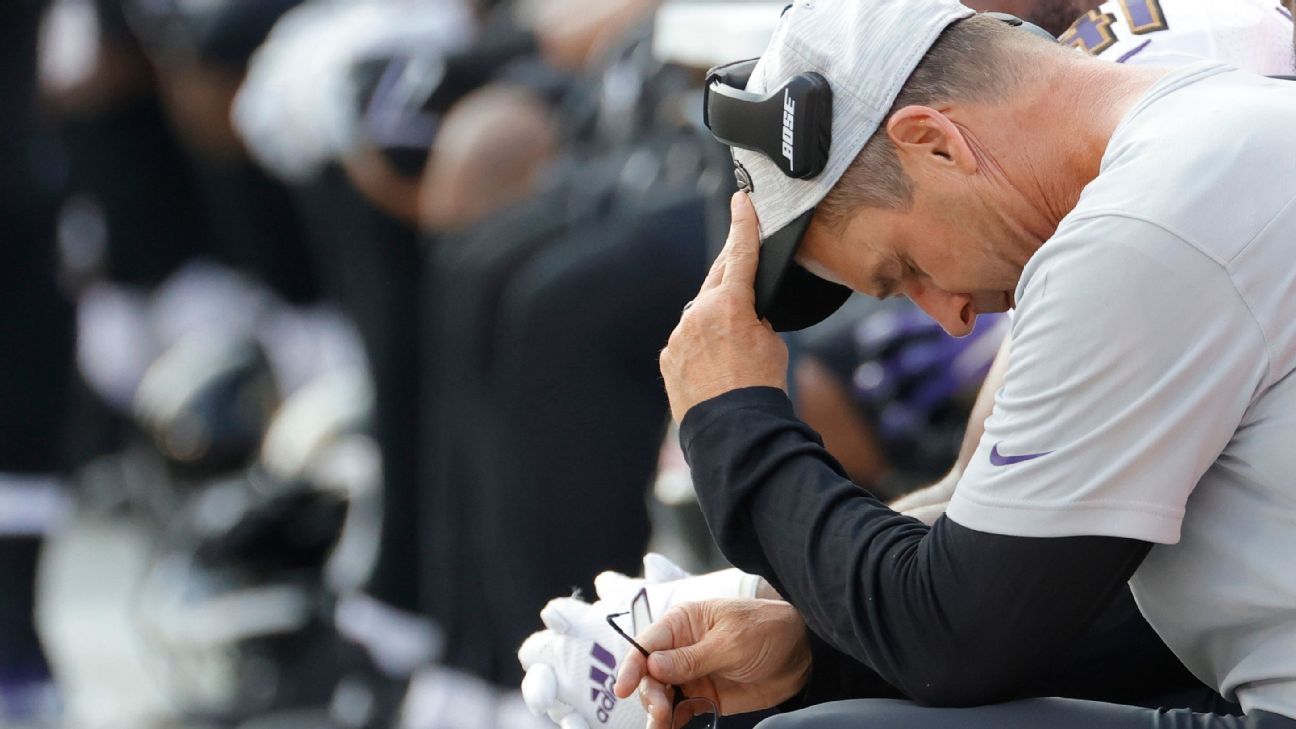 Louis Riddick believes it's now that Marcus Peters and Gus Edwards have to be rehabilitated after they are both feared to have broken an ACL. (1:44).
OWINGS MILLS (Md. OWINGS MILLS, MD. - Marcus Peters, cornerback for the Baltimore Ravens, was trying to put an optimistic spin on their injury-plagued training camp. Peters discussed Gus "The Bus", the running back, with whom Peters was to replace J.K. Dobbins who recently sustained a season-ending knee injury.

Peters spoke out about Dobbins' loss, saying that it would hurt them. Gus will be able pick it up. We're going to board The Bus and ride it.

Thursday's news continued a string of setbacks and injuries for the Ravens. Baltimore has seen 13 key players sidelined since July 27th, when training camp started. They have been either injured or tested positive for COVID-19.

Bears are confident Mack is ready for big year

Jones and Tannehill work together on Tennessee chemistry

As the season draws near, it has only gotten worse. Five Ravens players have sustained season-ending injuries in the last 19 days, including three running backs. Baltimore will start Ty'Son Williams (a practice squad player without any NFL carries) as a running back in Monday Night Football's opener at Las Vegas (8 :15 p.m.). ET, ABC

Here's a recap of Baltimore's horrible run since the beginning of training camp.

July 29: Wide receiver Marquise Hollywood Brown hurts his hamstring during the second camp practice. He's out for the remainder of camp, and returns 32 days later.

John Harbaugh, the Ravens' coach, and his players have experienced many setbacks during training camp. Geoff Burke-USA TODAY Sports

Aug. 2: Miles Boykin, wide receiver, injures his hamstring. He is then placed on injured reserve and will not return to the field for the remainder of the season. He is expected back in October.

Aug. 3, Guard Kevin Zeitler is injured in his foot. He will be sidelined for 13 consecutive days.

Aug. 6: After being in close coverage against Mark Andrews, cornerback Jimmy Smith descends to the ground. Smith is taken off the field after sustaining a right ankle injury. Smith is now out for 33 days.

Aug. 10th: Wide receiver Rashod bateman cuts his right groin while making a cut against Peters in a one-on-1 drill. To start the season, he is put on injured reserve and undergoes surgery. It is expected that Bateman will return in October.

Aug. 17, Cornerback Marlon Huffrey experiences mildly strain in his groin after he turns to continue with Jaylon Moore, wide receiver, on a deep route. He will be out of action for 15 days.

Aug. 18: Defensive end Derek Wolfe gets knocked on the back during a joint practice at Carolina. He was a projected starter but has not returned to practice.

Aug. 21: Inside linebacker L.J. L.J. Fort tore his ACL during the Ravens preseason match at Carolina. This team is using synthetic FieldTurf. John Harbaugh, Ravens coach, said after the game that Fort's ACL was torn in the AstroTurf. This is a setback for Baltimore's special teams, as well as their depth at the inside linebacker. He was the only inside linebacker for the team who was not older than 26.

August 28: Dobbins ruptures his ACL following a direct hit from Washington cornerback Jimmy Moreland on his left knee. Dobbins was expected to have a breakout season in his first full season as Baltimore's running back. Harbaugh, who was watching from the sidelines, lamented Dobbins' injury shortly after telling Jackson and Anthony Levine Sr. that he just wanted the offense to win one series. It will pass, but I won't let it get to me.

September 2: Justice Hill, running back from an ankle injury sustained a second Achilles tear in his second practice. In just five days, he is the second Baltimore running back who has sustained a season-ending injury. Soon, the Ravens sign Devonta Freeman as well as Le'Veon and Devonta Bell to their practice squad.

September 9: The Ravens are without Edwards and Peters due to season-ending ACL injuries. The practice was not full-contact and the players were not dressed in pads. Edwards is the third runningback to be injured for the entire season. Peters is the NFL's leader in interceptions (31), since 2015. He is also the first defensive starter to sustain a season-ending injury.
stretchedwardsinjuriesinjurypetersseasonnearsrunningravensopenerchallengesbrutalpracticedobbinscampsetbacksseasonending
2.2k Like