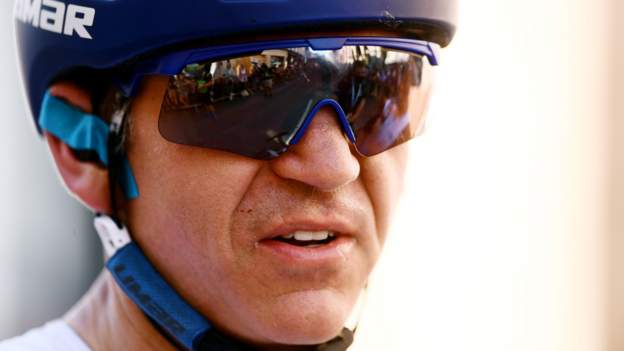 William Bjergfelt (right), rides in the breakaway during stage two of 2021 Tour of England
William Bjergfelt, a Swift Carbon Racing rider, hopes to inspire others after becoming the first paracyclist to participate in the Tour of Britain.

Bjergfelt from Bristol was in a head on collision with a vehicle in 2015. He suffered a brain injury and had his right leg broken into 25 pieces.

He was fitted with three titanium plates to repair his leg, but was told that he would never again ride a bicycle or race one.

Six years later, at 42, Bjergfelt made the Tour of Britain debut. He is now the second-oldest participant in the race and the first paracyclist to start the race.

"I find myself pinching myself every morning to remind myself that I am not dreaming and that I am here. "I've always wanted to race this since childhood, I can still remember the days at the Milk Race (the Tour in its previous form)," Bjergfelt stated.

"In 2011, I was very close to riding, but got thrown at the last minute, just two days before the Tour of Britain began. I was afraid that my chance might be lost.

"2015 was a great year. I had already agreed to a contract for a 2016 team, so I thought maybe I would get the chance if my performance is good enough.

"But then, the accident happened while the team I was riding for was racing in the Tour of Britain."

Bjergfelt competed in the Para-cycling International in Yorkshire for Great Britain in 2019.

Bjergfelt competed as a mountain biker in the XCO World Cup series before he was injured in 2015. He was then drawn to the road and started his para-cycling career through British Cycling. For athletes with minimal impairment, he competes in the C5 division.

He joined British Continental Squad Swift Carbon in 2019, a third-tier UCI team. Bjergfelt is a domestique and his role is to support his teammates rather than race for him. The level of racing experience that he has gained across Europe and the UK also helps his ambitions in paracycling.

Bjergfelt manages to balance his racing and a career as an aerospace engineer. This is a stark contrast with the majority of his competitors at the Tour of Britain like road world champion Julian Alaphilippe or Olympic medallist Wout Van Aert, and Tour de France stage record holder Mark Cavendish.

Bjergfelt isn't the first para-athlete to race for a trade group. Sarah Storey, the Paralympian who was named Great Britain's most decorated Paralympian this summer, has raced in many non-para races, including for an eponymous team from 2018. Despite this, para riders are still not represented in the professional cycling community.

"That's the biggest thing I want to get out of this. I want people to believe in their abilities and that anything is possible. "That's one of my main goals," Bjergfelt stated.

It's something I am extremely proud of. I spent the first 20 minutes on Wednesday's stage (stage 4), talking with Mark Cavendish. I told him how great he was and that he had gone from being at the brink of his career ending last year to winning four stages of Tour de France this year.

"We were talking about ourselves as well and he said'mate', while I replied 'no, you're not the legend'. We were laughing. It was impossible to write it, it was like pinching me."

Bjergfelt's remarkable journey to September's home-tour is made even more impressive when you consider that he also broke his leg in April. Although he lost his hopes of competing at the Paralympics in Tokyo this summer due to his injury, it took him just three weeks to get back on his bike after he had pins and plates placed into his leg.

After competing in June's Para-cycling World Championships, he finished ninth and fifteenth in the C5 road race and time trial, before focusing on Sunday's Tour of Britain in Cornwall.

As part of the five-rider breakaway stage two in Devon, he displayed his credentials at the top of the race.

"I love the sport. It saved my life in a weird way," Bjergfelt said.

"I have already reached an agreement with British Cycling to go to Paris (Paralympics 2020). There's still a lot to do. I want to be able to attend the Paralympics with three gold medals. This will be my goal for the future.

"At the moment, Malcolm Elliott, at 49 years old, is racing the Tour of Britain. He deserves that title. I will keep trying, and see if I can take it off of him.
britainwilliamparacyclisthistoryracebjergfeltworldteamimstagetourthoughtracingmakes
2.2k Like