The six problems aviation must fix to hit net zero 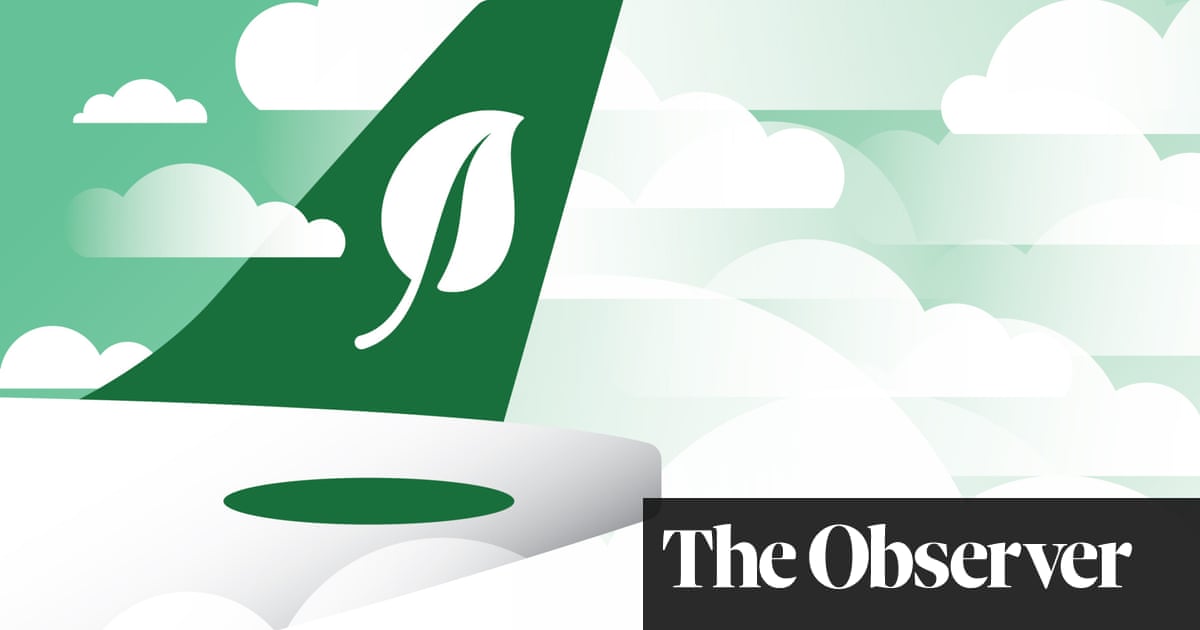 2020 saw a decline in aviation. In 2020, the number of flights decreased by 35% compared to 2019. This resulted in a substantial drop in aviation's greenhouse gas emissions. As more countries open up, and more people fly, aviation will see a gradual return to its previous levels. Industry forecasts that passenger numbers will return to 2019 globally by 2023, and that the industry will be back on track within a few decades with its previous growth projections.
This is all bad news for the planet. The industry's CO2 emissions are expected to triple by 2050. If the world wants to limit global warming to 1.5C, then it must have net zero CO2 emissions by 2050. It is difficult to decarbonize aviation. There are some tricky ingredients to decarbonize aviation: complex technological solutions, hidden climate effects, personal freedoms, and a large and wealthy customer base. These are just some of the major hurdles that the sector must overcome to become carbon neutral.

Jet kerosene, a fossil fuel-derived jet fuel, was for a long time the only option for aircraft. The process of flying through the air requires a lot more energy so planes must rely on fuels with high energy densities, according to Jagoda Egeland (an aviation policy expert at OECD). There aren't many alternatives with these properties.

Over time, aircraft's fuel efficiency improves. Emma Harvey, a sustainability consultant and former head of sustainability at Virgin Atlantic, states that switching from a four-engine jumbo aircraft to an efficient twin-engine aircraft can reduce carbon emission by as much as 30% per flight. It is possible to reduce emissions by upgrading and renewing fleets. The savings, however, are not sufficient to keep pace with the increase in flight numbers. Prior to the pandemic, aviation was becoming 3% more efficient per year while passenger demand was growing at a rate of 5% per year.

After years of research, sustainable aviation fuels (or SAFs) are beginning to make their way onto the market. They accounted for 0.1% of the aviation fuel consumption in 2018, but it is possible to increase this number over time.

The most promising in the short-term are advanced waste biofuels, which can be made from old cooking oils. It is very affordable and has low life-cycle emissions. However, it is hard to find, according to Dan Rutherford (ICCT), director of aviation at International Council on Clean Transportation). He estimates that these fuels would only account for 2% of US and EU jet fuel usage.

Biofuels can also come from corn, soybeans and palm. These biofuels have been opposed by environmental groups for many years. They can be competitive with food production and cause deforestation. EU legislation, which aims to increase SAFs, specifically prohibits their use. Rutherford says that there are other types of advanced biofuels, including those made from agricultural and forest wastes and cellulosic plant cells.

Electrofuel is a final type of fuel that could possibly be used in aircraft currently in use. It is made from clean electricity and hydrogen. These could theoretically be available in an almost endless supply, according to Rutherford. However, they are currently extremely expensive to produce.

A variety of new types of aircraft are also on the horizon. According to Ruth Wood, a Manchester University senior lecturer in environment, climate change, electric planes offer the promise of shorter routes and better battery technology. She adds that electric propulsion for larger aircraft is still far away due to the weight and size of current battery technology.

Some companies are developing new types of aircraft that can run on hydrogen gas. This could also be made using clean electricity. Airbus presented its idea for a hydrogen plane last year. However, it acknowledged that such aircraft won't be in widespread use until 2050.

Are there any chances of solving the problem? Although clean fuels will be more widely used, they will only make up a small percentage of fuel by 2030. They are unlikely to have a significant impact on the world until 2050.

Although aviation accounts for approximately 2.5% of global CO2 emissions, its warming impact is much greater due to other gases and particulates it releases at high altitudes. These are often referred to as non-CO2 impacts. They include contrail clouds and nitrogen oxides. Although these are not often mentioned in aviation climate goals they could triple the climate impacts of aircraft compared to CO 2.

These effects are both problematic and promising. They can vary based on the climatic conditions. One study showed that only 2% of flights contributed to 80% of the contrail warming effects. Contrails are most harmful at night, which is why night-time flights can be particularly dangerous.

Egeland says that while there is still much to be learned about these impacts and policies can already be implemented to reduce them. For example, an additional charge for aeroplanes flying at bad times of day.

It is important to remember that low-carbon fuels may still have non-CO2 impacts, but these are expected to be lower for most fuels than for kerosene.

Are there any chances of solving the problem? It is unlikely that this issue will be solved in the short term, given its low prominence. This issue is getting more attention from the EU.

Some people argue that technological solutions are too slow to reduce aviation emissions. To limit climate change, measures must be taken to reduce the number of people who fly.

Flying isn't an activity that is evenly distributed. About 15% of UK residents fly 70% of all flights. Half of UK citizens don't fly at all in any given calendar year. This pattern is repeated in many other countries, according to Cait Hewitt (Policy Director at the Aviation Environment Federation).

Globally, the inequality in flying is even greater. A study found that only 1% of the world's population emits half of the CO2 from commercial aviation. Only 2-4% of people travel internationally each year.

Campaigners support a frequent flyer tax as a fair way to reduce aviation emissions. A Free Ride UK argues that everyone should be able to fly one time a year without paying a levy. Then, for each additional flight taken in the same year, a rising fee will apply. A frequent flyer tax was also supported by the UK's first climate assembly.

Wood says that the problem with such a tax is that not all frequent flyers will have the money to pay it or have their employers pay it.

Manuel Grebenjak is a campaigner for the Stay Grounded network. He believes that measures to limit flight, including banning certain routes, can help reduce rising emissions. He says that if a flight is prohibited from one city to the next, then no one can fly.

France has already banned domestic flights on routes that are easily travelled by train in under two hours. The International Energy Agency (IEA) reports that even offering an alternative to flying can work. According to new high-speed rail lines, aviation transport on these routes has been reduced by as much as 80%.

Are there any chances of solving the problem? The UK and other governments tend to avoid demand management approaches to reducing aviation emissions. However, France and Austria have made the first steps.

After years of inaction, 2016 saw the UN's aviation agency, ICAO, agree on the Carbon Offsetting and Reduction Scheme (Corsia) in which countries agreed to offset an increase in aviation emissions that was higher than the average level in 2019 and 2020. However, due to the pandemic, some countries altered the baseline of the scheme. This means that airlines are not required to comply with the plan. Egeland states that Corsia's effectiveness will depend on the quality and acceptance of carbon offsets by ICAO.

The ICAO is currently in discussions about a long-term aviation climate goal for 2050. However, it is not known when or what target this will be.

Policies are also being discussed more frequently at the regional and national levels. The EU's Fit for 55 climate legislation proposes to set targets for SAFs, and end the exemption of aviation fuel taxes. Grebenjak says that aviation fuel is almost exempted from all taxes. Grebenjak says that the EU would like to end aviation's basically free rider status and institute a kerosene taxes at the same level of other fuels.

Are there any chances of solving the problem? Chances of being solved?

The EU is taking positive steps. The UK government has even launched a consultation on its strategy to zero-emission aviation. The US and Europe will see the greatest growth in aviation in the next decades, but this is mainly due to the rising middle classes in developing countries.

Asia, the Pacific, Africa, and the Middle East will see the greatest growth over the next 20-years. Last year, China overtook America as the largest international air passenger market. Hewitt says that the rise of a middle-class travelling in India and China has led to passenger demand growing at about 10% per year.

Rutherford also stated that frequent flyers are similar no matter where they are located, and in particular professionals from the upper-middle class. He suggests that a global frequent flyer tax could be one way to stop the growth.

It is worth noting, however, that China has the largest high-speed railway network in the world, while other developed countries like the US have not yet installed a single line. Grebenjak says that we must do our research before discussing China.

Are there any chances of solving the problem? It is up to the developed countries to lead in reducing aviation emissions. This will give them more leverage to exert pressure on developing nations.

Despite growing efforts to reconcile air travel with a net zero world environment, some companies continue to push for more polluting aircraft.

United Airlines announced earlier this year that it would purchase 15 supersonic aircraft from Boom Supersonic with the goal of using them in 2029. Boom also has deals with Rolls-Royce, and the US Air Force.

These supersonic flights can consume five to seven times the fuel per passenger than subsonic aircrafts. Rutherford also says that supersonics will cause non-CO2 emissions to be disproportionately high in the stratosphere. He also said that supersonic planes with high emissions could be a distraction to zero emission technologies like hydrogen planes.

Rutherford believes that supersonics can cause climate change by requiring them to adhere to the same environmental standards as other aircraft. He says that this would be essentially a ban. They simply can't meet these standards.

Are there any chances of solving the problem? The supersonics can be a catastrophe for the climate. They should be subject to the same environmental standards that normal planes.