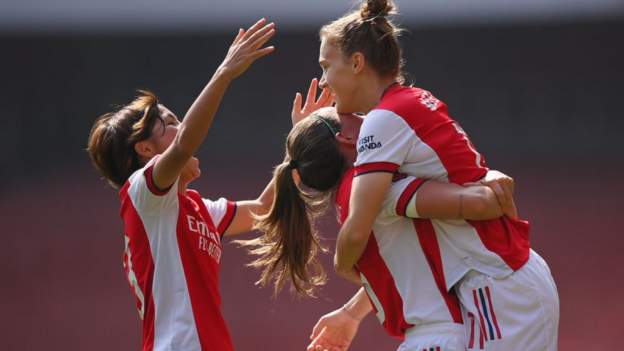 Arsenal put on an amazing show in front of more than 8,000 people during a match of great quality.

Chelsea's Erin Cuthbert scored a goal at half-time, but Arsenal's Mead double in 11 minutes gave them the lead.

Pernille Harter's header set up an exciting ending. Chelsea tried desperately to find an equaliser, but Arsenal, helped by the cheers of their home fans, held onto the victory for a major win that will kick-start their season.

There were many chances on both sides and it was possible to score more goals if not for the last-ditch defense of Jen Beattie and Leah Williamson from Arsenal.

Mead was astonished in front of Sarina Wiegman, the new England manager, as she watched from the stands.

This chance was just minutes after Guro Reiten, Chelsea's midfielder, had crossed the goal line.

Emma Hayes, Chelsea's boss, was quick to bring on Fran Kirby and Sam Kerr after the break. However, Arsenal scored a goal in the final 10 minutes but they couldn't get the breakthrough.

Jonas Eidevall joined Arsenal in the summer as manager. He was always on his feet, organizing and applauding his team while they worked tirelessly out of possession.

Chelsea's attacking play was still a threat, but Arsenal showed real determination and grit as they faced a relentless attack from the Blues in their final minutes.

It was a declaration of intent by the hosts, who were third in the last season's competition and still far from the title race between Chelsea (runner-up) and Manchester City (runner-up).

Chelsea lost only one league game last season, but they were reminded of what lies ahead when they try to defend their title.

Rachel Brown-Finnis, ex-England goalkeeper, on BBC Radio 5 Live: We saw the quality – the world-class players that we have available in the WSL. Arsenal was at their best today. Arsenal fans will see that the side has energy and style.

They have a great tactical mind. It was flawless. Arsenal gave a flawless performance.