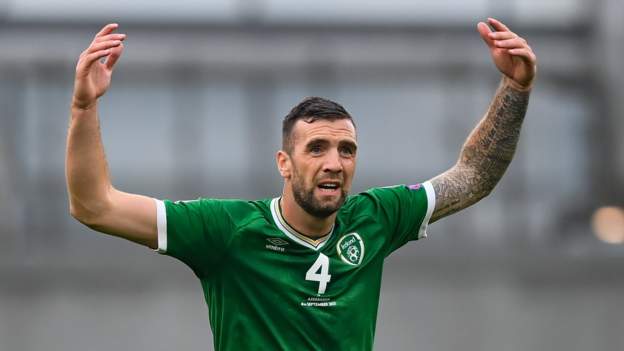 Last update on.
Callum Robinson (left), missed an opportunity to win it for Republic

Shane Duffy saved the Republic of Ireland's blushes by scoring a late header in Dublin to secure a World Cup qualifying draw against Azerbaijan.

The Irish lost their last home qualifier against Luxembourg and were once more embarrassed by Emin Mahmudov’s first-half strike.

Stephen Kenny's side scored their first point of campaign with a 87-minute header by Duffy.

The Republic had more chances than anyone to win comfortably.

However, the draw was against the 112th-ranked side in the world due to a lackluster third.

Although they did not suffer a repeat of their March home defeat to Luxembourg, this result means that the Republic will now play in front of their home fans for the first-time since November 2019, extending their winless streak of competitive matches to 15.

The draw puts the Irish further behind the top two, with Luxembourg beating Serbia to join Portugal on 10.

The first half seemed to be heading towards a scoreless end, but Mahmudov's superb right-footed effort stunned the Aviva Stadium. It was not so much due to the Republic's poor defending as it was the midfielder’s skillful finishing.

After Shane Duffy's head clearance was taken care of, Mahmudov was given the space and time by Josh Cullen and Seamus Coleman to move on to his right foot to send a curling shot in Gavin Bazunu’s right-hand top corner.

It reminded me of Gerson Rodrigues’ winner for Luxembourg in Dublin in March, when the Dynamo Kyiv attacker grabbed a loose ball and went unscathed before shooting past Bazunu.