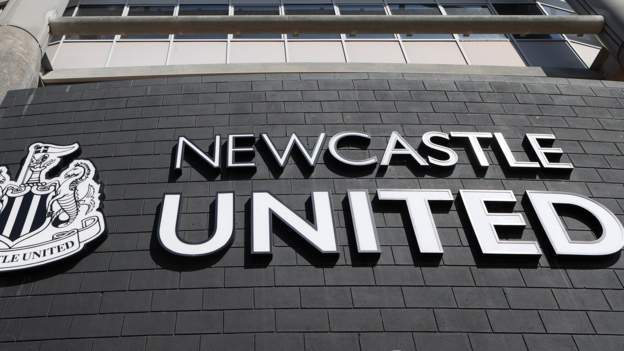 Last update on. From the section Newcastle
Joe Willock was Newcastle’s only major signing during the window. This disappointed fans.

Newcastle United has defended the lack of spending during the transfer window, claiming that claims of money being taken from the club are "wholly false".

Fans were critical of Joe Willock, a midfielder, being the only major signing at a price over 20m. Other Premier League clubs paid more.

However, the club stated in a lengthy statement that Covid-19 had impacted its finances.

It stated that it operates in a sustainable manner, but not at the cost of being ambitious.

It claimed it had spent 120m on players in the summer of 2019, 160m of which were sales, and that Newcastle is "built on the core principle of spending what we have".

However, supporters are complaining that Willock's signing from Arsenal was not enough to offset the fact that rivals like West Ham, Crystal Palace, Crystal Palace, and Norwich were far more active during the summer transfer window.

Steve Bruce's poor start to the season has not helped Tyneside's mood. The club are still searching for a first league victory, and the ongoing saga about a failed takeover by Mike Ashley and the desire of fans to see him go has created uncertainty.

The transfer deadline day was when matters became clear. Despite the fact that Willock's transfer fee had been paid in installments, attempts to sign Leicester City midfielder Hamza Chudhury on loan failed.

Newcastle explained that Covid-19 was a major factor in its finances.

They stated that in a normal year, their operating model would generate enough funds to allow us to make one or more quality first-team members as well as invest in other areas.

"The past two years have been difficult, with Covid-19 having a significant impact on the club’s finances and consequently the amount of cash that we have to spend.

"Internally, all the parties are well-acquainted with the budgetary parameters within which we operate."

It was also stated that Willock's signing was contingent on a mutual understanding that player trading would heavily influence future additions to the squad in terms of space and funds available.

The club defended their recent spending, which included a club-record 40m on forward Joelinton in 2019. Citing a report that claimed the club's net expenditure was the 10th highest Premier League, they said: "Since the summer 2019, the club made nine permanent signings, and took five players on loan.

"Our net spending over this period is approximately 120m* [160m spent by players and 40m from sales].

"We have fulfilled our commitment to spend what we have and, in fact, because of our business this year, have spent more money to secure our primary goal.

"To suggest otherwise would be misleading, and claims that money was taken from the club are completely false."

The Magpies also stated that they wanted to emphasize how "the club retained their best players despite obvious financial difficulties".

They said, "We ask all of our loyal supporters to support their team because we are stronger together."

Santiago Munoz: Newcastle sign striker with a name almost out of a blockbuster