Examining asteroid Ryugu in opposition to Hayabusa2: A starkly lit distribution of dust and rock 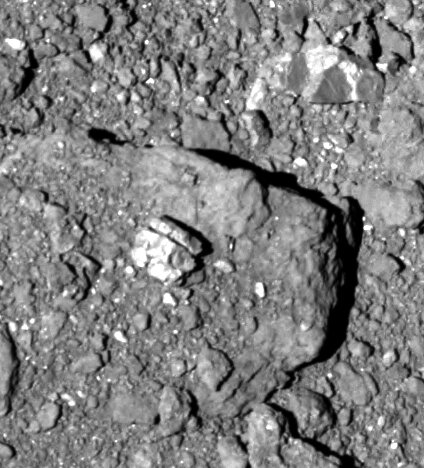 This image shows a large boulder partially submerged by a regolith (center), with a smaller boulder on top. This image is approximately 4 m wide and was taken by Hayabusa2s Optical Navigation Camera. It was taken near the MINERVA II landing site (Sugita et al. 2019 Credit: ISAS/JAXA University of Tokyo
A new analysis of Hayabusa2 data on Ryugu's asteroid shows that much of its surface scatters and reflects light in ways consistent with lab studies of carbonaceous-chondrite meteorites. This research focuses on Ryugu's opposition to the spacecraft, Sun, and uses Hayabusa2’s near infrared spectrometer (NIRS3) and optical navigation camera, ONC) measurements and observations. This work was led by Deborah Domingue, PSI's Deputy Director, and Senior Scientist. It appears in the Planetary Science Journal and includes PSI researchers Faith Vilas, Lucille LeCorre, and others.

The Japan Aerospace Exploration Agency's Hayabusa2 mission, which was launched in June 2018, met up with Ryugu, a near-Earth asteroid. The spacecraft was on a mission of sampling this example from the early Solar System and to determine if it might be a dangerous object. (No objects are currently known to pose a threat to Earth.

Hayabusa2 studied Ryugu using a combination of a camera that captures photos similar to what you might use on your phone and a spectrometer which spreads light into all the colors, creating a rainbow. These data can be used for understanding the different sizes and materials of an asteroid.

NIRS3 revealed Ryugu as a dark object made of rubble in a variety sizes but with a similar composition throughoutvery similar a carbonaceous chondrite-meteorite. Ryugu's images show a very coarse-grained surface, reminiscent of pebbles on a sandy beach. Domingue stated that spectral analysis has shown that dust is also present.

Another example of a large boulder partially submerged by a finer-grained, more porous regolith. This Type 2 boulder has smoother surfaces and a thinner layered structure (Sugita, et al. 2019 The image was taken using the Optical Navigation Camera and measures approximately 80 meters in width. Credit: ISAS/JAXA University of Tokyo.

These data were taken in very specific conditions. The spacecraft was facing the Sun at its back, and Ryugu was shining brightly in front of it instruments. This is known as opposition. Ryugu, the asteroid that was opposite the Sun's spacecraft, was especially well lit to magnify the effects of dust interaction with light. Although the amount of dust found wouldn't be enough to impress someone with a dusty barn, it was sufficient to attract the attention of these researchers. The Mobile Asteroid Surface Scout, (MASCOT), lander didn't find any evidence of dust. However, the two sample collection activities showed evidence for dust and a fibrous surface. It is still being debated whether dust exists and how abundant it is. Domingue stated that our analyses are on the "there's some dust here" side of the debate.

MASCOT was one the three small robots Hayabusa2 brought with it to explore Ryugu. The 17-hour autonomous exploration by this German aerospace lander was characterized as a porous surface similar to pumice stone. However, it did not find any dust.

Complexity makes Ryugu difficult to understand. Although the opposition region appeared to be homogeneous in appearance, it doesn't accurately represent the entire asteroid. The asteroid has been subject to radiation and heating from the Sun over its long history. It also collided with many other objects, large and small. Each interaction left its mark. Domingue said that Ryugu's surface is complex. "There are variations. These variations are the result of non-uniform interaction with the space environmentfrom microscopic to macroscale impacts, in addition to alteration by the Sun."

Although it is easy to believe that each snowflake is unique, the truth is that every asteroid has its own characteristics, weathering and impact pattern.

The Planetary Science Journal published this work, titled "Spectroscopic properties of 162173 Ryugu’s surface from the NIRS3 opposition observations," and it's only part of Ryugu’s story. This paper is part two companion publications by Yasuhiro Yakota and Domingue. Together they highlight the team's efforts in deciphering Ryugu’s physical nature.