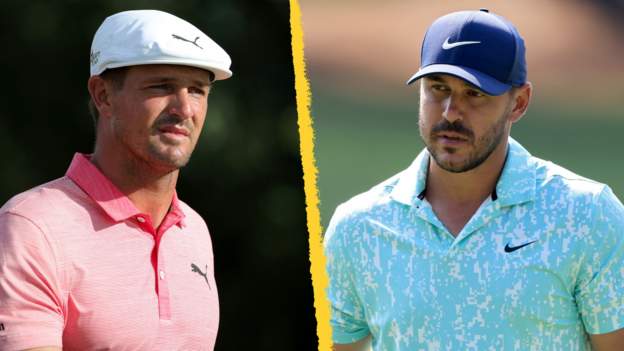 Koepka stated that DeChambeau was fair game after "not holding up to his end of the deal" in a series of social media comments and quotes. He said it all began in 2019.

Fans chose their side in the dispute and managed to upset the PGA Tour by their support.

"Brooksie" was shouted from the galleries at recent tournaments in a subtle or particularly inventive heckle directed at fellow American DeChambeau.

DeChambeau, who was defeated by Patrick Cantlay in Sunday's BMW Championship play-off, wore a thigh-high in retaliation to a fan, who said "great job Brooksie".

Jay Monahan, chief of the PGA Tour, stated that "By coming at a PGA Tour Event, you're expected contribute to a welcoming environment by abstaining from and reporting any unsafe or disruptive behaviour."

"Comments and gestures that are offensive or demeaning to the inclusive nature of the game won't be tolerated."

Monahan stated that "bad actors" were targeting DeChambeau to abuse them with cries like "Brooksie" and could be removed from an occasion.

Monahan stated, "The reason I say yes is that the barometer we all use is the word respect." "When you hear the word 'Brooksie' or any expression of disrespect, it is to me that you are being respectful or discourteous.

"This has been going on for a long time. It's unacceptable to me at this stage, and it's something we won't tolerate moving forward.

A number of golfers reacted to the crackdown, with England's Lee Westwood listing the multitude of less-than-complimentary names directed at him over the years.

Shane Lowry, an Irish Open champion, said that he was often mistaken for Andrew 'Beef’ Johnston. The former Open champion posted on Twitter that he would be kicked out if anyone calls him Johnston.
expulsionheargamegoingbrooksjohnstonshoutfansdechambeaurowkoepkabrysonyelledtourwelcomingpgafacebrooksie
2.2k Like