Written on water: Reconstructing the ancient history of an ocean current 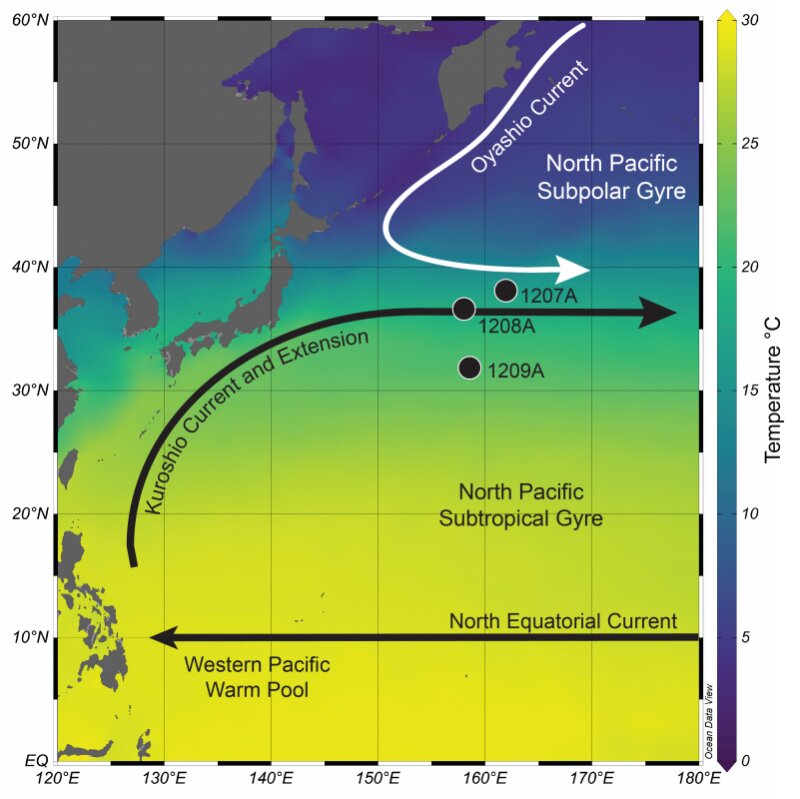 The northwest Pacific Ocean's current-day sea surface temperatures map. The Kuroshio Current, Extension and the Oyashio Current are shown by the black line with arrows. The Oyashio Current can be seen by the white line with arrows. The circles indicate the locations of the three sediment cores (1207, 1208, & 1209) that were used in the study. They were drilled on Shatsky Rise. Credit: Binghamton University
Ocean currents are motion. They move from the tropics towards the poles, and back again, shifting large amounts of water from one moment to the next. They are also extremely old and have been following their basic course for millions upon millions of years.

Paleoceanographers like Adriane Lam, Presidential Diversity Postdoctoral Fellow at Binghamton University’s Department of Geological Sciences and Environmental Studies, are able to trace a history written in waters. Lam is the principal author of "Pliocene - earliest Pleistocene (55.25 Ma) Reconstruction Of the Kuroshio Current Extension Reveals A Dynamic Current", recently published in Paleoceanography. Associating authors are Molly Patterson (Assistant Professor of Geological Sciences, Environmental Studies), Kenneth MacLeod of The University of Missouri, Solveig Schlling of The University of Texas at Austin and R. Mark Leckie of University of Massachusetts Amherst. Andrew Fraass of the University of Bristol and Nicholas Venti of University of Delaware.

The Kuroshio Current and Extension is the major western boundary current in northern Pacific Ocean. It flows along North America's eastern coast. Lam explained that boundary currents, which are driven by wind, are the heartbeats of the ocean. They move heat, salt, and gases from the equatorial waters to the middle latitudes.

These currents distribute heat from the high latitudes of the tropics to lower latitudes. Because the water is so warm, corals can be found in the Kuroshio Current at their highest latitude.

The warmth comes from the warm surface waters, known as the Western Pacific Warm Pool. These waters are carried north by the Kuroshio Current, passing the Japanese coast and then moving east at the 36N latitude to join the open Pacific Ocean. It then becomes the Kuroshio Current extension.

The current and the extension release large amounts of heat from the warm waters into the Northern Hemisphere's lower atmosphere. They also help to shape the precipitation patterns in Japan and North America's West Coast. Although the Kuroshio is believed to have an impact on the climate and weather patterns, its effects on the thousand- and multi-million-year time frames are still unknown.

The Kuroshio is also a key player in ecosystems as well as the fishing industry. It meets the Oyashio current in the northwest Pacific. This brings the cool waters from the polar region southward. Due to the mixture of cool and warm waters, there is a strong temperature gradient formed where the currents meet. This creates an area of upwelling where nutrients-rich waters from deep oceans are brought to the surface by currents flowing eastward.

It's not only the water that mixes: The warm- and cold-water organisms that live within the currents also flow together in an area known as an ecotone, which is a transition zone between ecosystems. The area's inhabitants include many species of plankton and fish, which are a large part of Japan's fishing industry.

It is crucial to understand how boundary currents like the Kuroshio react to climate change and rising CO2 levels in the atmosphere. Lam stated that currents in the ocean are currently warming up to three times faster today than other parts of the ocean.

Both ocean model studies and observational data show that the Kuroshio Current extension is moving northward, increasing its transport capability. However, researchers aren't sure how this will impact the organisms living there or the local weather and climate patterns.

This research, which was published recently, is the first to reconstruct the Kuroshio in its 2.5- to 5-million year old state. It spans both periods of global cooling and warming, as well the closing of a major river in Central America. The distant past of the current may help answer some questions about its future.

Image of Globigerinoides Ruber, a planktic species of foraminifera, taken with a scanning electron microscope. This image was used in geochemical studies to reconstruct the behavior and distribution of the Kuroshio Current extension. Credit: Binghamton University

Future and past oceans

The atmospheric CO2 levels in the Pliocene (which lasted 2.5 to 5.3 millions years ago) were similar to those that we see today, at 350 to 450 parts/million. The atmosphere today contains approximately 415 parts per Million of CO 2.

Lam stated that "the fun part about this time period was that the continents were arranged similarly to today."

She noted that there were differences in landmasses. Until 2.5 million years ago, a waterway was established between North and South America. This allowed surface waters from both the Atlantic and Pacific oceans to mix. The Central American Seaway was closed in the event that the Kuroshio Current Extension became its current configuration.

The recently published study by the researchers reconstructs the Kuroshio in the mPWP using chemical signatures from fossilized shells and plankton once found in the Kuroshio's surface waters.

Reconstruction of the current

There are many methods that scientists use to reconstruct the history and evolution of an ocean current depending on the time period. They rely on observational data for shorter timescales to determine how the current's path changes from one year to another or decade to decade. However, this dataset may not be sufficient for climate change.

Lam explained that it was important and useful to reconstruct the western boundary current behavior through deep time using the sedimentary records from millions of years back. "The sedimentary record lens allows us to see the short-term fluctuations in the current. This means that we can only recover signals that indicate longer-term, more significant changes of the currents.

The chemical signals from fossil plankton from the surface ocean were used by the researchers in their study. They also used three deep-sea sedimentcores from Shatsky Rise (a location on the northwest Pacific Seafloor). For the past 170 million years, planktic foraminifera lived in open oceans. Their durable shells, known as "tests", are made from calcium carbonate and can accumulate on the ocean floor after they die.

Lam previously calculated the diversity in fossil plankton at each site for the chemical study. The northernmost Shatsky Rise site was the most diverse, ranging from 12 million years ago to today. This indicates that the ecotone created from the current is not new and likely that the Kuroshio as well.

Researchers aren't sure how warm the current was during the mPWP or how the chemical signal reacts to temperature and salinity changes. Lam and his colleagues at other SUNY schools are currently working to create a grant that would employ different chemical methods in order to answer these questions.

"The ocean is greatly affected by climate change. We must consider ways to protect it and other marine organisms. Lam stated that the Kuroshio Current extension is home to some the most diverse marine life in the world.