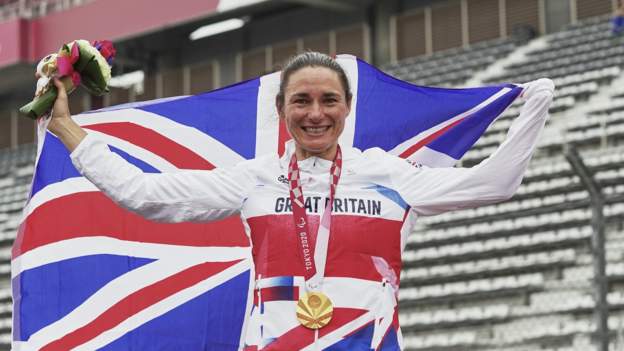 Sarah Storey was thrilled to be named Great Britain's most successful Paralympian after winning her 16th gold medal at the Tokyo C5 time trial.

The 43-year old, who was appearing at her eighth Paralympic Games appearance, tied the record set by Mike Kenny, a swimmer.

The time trial was won by Crystal Lane-Wright, her British teammate. She took silver.

Storey will have the chance to win 17th place in Thursday's road race.

Storey said, "I didn't set out to become Britain's greatest Paralympian. But to match the best man in the world and have more medals is just a dream come to reality." He has won 27 Paralympic medals.

It is incredible. It was one the most beautiful days of today. The conditions were perfect.

The course is very fast. I was able to ride a good line and maintain speed in the corners. I did get caught in traffic at times, perhaps because I was going a lot faster than they expected.

"I'm so happy. This has been something I've been working towards for a while. It has many parts, including my bike and physical preparations.

Storey was a Paralympic athlete when she made her debut at 1992 Games in Barcelona. She won her first five gold medals for swimming, before moving to cycling.

She has won 11 golds in cycling on track and road since Beijing 2008.

The time trial was completed by the 43-year-old, who had earlier won individual pursuit gold at the Tokyo Games. It took 36 minutes 8.90 seconds.