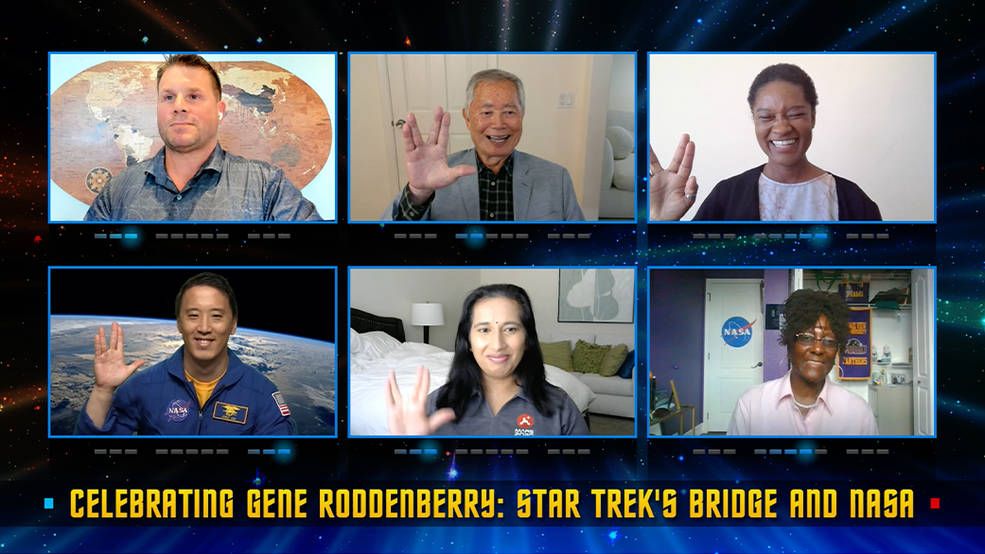 A panel of NASA employees and an actor from "Star Trek" gathered virtually to celebrate diversity in honor of Gene Roddenberry's 100th birthday.
Roddenberry is known for incorporating diversity into "The Original Series," which ran from 1966 to 1968. It featured a cast of stars, smart characters, from diverse backgrounds, such as a Russian soldier at the heights of the Cold War and a Black woman who worked on the bridge during the heights of U.S. segregation.

NASA has collaborated with Star Trek from the beginning to use their talents for agency campaigns. A 1970s campaign seeking Black space travelers and women, and renaming a prototype space shuttle after the Star Trek starship U.S.S. is one of the most famous examples. Enterprise.

While neither NASA nor Roddenberry were perfect in their early years of diversity, they both made an effort to address them. In a prerecorded message, NASA administrator Bill Nelson stated that Roddenberry was "ahead" of his time and that NASA continues to be informed by the diversity message Roddenberry tried to spread.

A 1976 Roddenberry speech in which he discussed diversity and its importance for "Star Trek" was broadcast live on NASA Television's Deep Space Network.

Roddenberry's 1976 statement said, "If we can't learn to enjoy...small differences, [and] accept in a positive light the differences among our own species, here on planet Earth, then we don’t deserve to go into space and meet diversity is almost certainly there." Roddenberry passed away in 1991.

Roddenberry's son Rod began the discussion by explaining why Roddenberry believed diversity was important. He mentioned that the franchise was built around a backbone philosophy called "Infinite Diversity, Infinite Combinations."

He said, "In Star Trek," that it wasn't about a bunch of people out looking for strange-looking aliens. They are going to seek out creatures that view the universe in a unique and different way. "We have reached a place in our intellectual evolution when we realized that it was necessary to experience different things to grow and develop."

He stated that "Star Trek" was first broadcast on television in 1966 "at the heights of various social issues." "We had civil rights movements going on, African Americans protesting for equality, and being attacked with fire hoses and attack dogs by law enforcement officers."

Takei made parallels to the current-day Black Lives Matter movement. He said that while there is still a lot of work ahead, diversity has made great strides over the 55 years since "Star Trek." began airing. He said that the show was a positive look into the future. "Hopefully, not too far into the future, we'll be able recognize what Gene was saying to us by working together in concert."

Tracy Drain, an engineer from NASA's Jet Propulsion Laboratory, has been involved in missions such as the Kepler spacecraft, which is searching for planets, and the Juno Jupiter flybys. She said that she grew-up watching "Star Trek" and is excited to see planets in real life as the actors on the show. She said that she was lucky because her mother and her father were both inspired to explore space by the Black actors.

Drain said that there is a double-edged sword because she was not well connected to her culture and history. She only began learning about it in her 30s. Drain, for example, was unaware of the NASA "Hidden Figures", the Black computer scientists who were involved in the background of NASA missions at Langley.

She has been working at NASA's Jet Propulsion Laboratory since graduating. Drain added diversity is one the best parts about her job. It's been amazing to be able to work with so many people, from different backgrounds, and to help put together complex missions.

Hortense Diggs is the director of the office for communications and public engagement at NASA Kennedy Space Center in Florida. She said that the variety of U.S.S.S. continues to inspire the many employees and contractors of her agency. Enterprise crews.

Diggs, a Black woman, confessed that she had always wanted to become a pediatrician, even though she was only a junior in high school. She loved working with children and students, and she knew this. Diggs had resisted the idea of attending school to major in biology, saying that she didn't know anyone who looked like her. Her math skills earned her a post-secondary scholarship for STEM (science technology engineering and math). She was encouraged by her mother to continue her education despite her doubts.

Diggs, who is now happily employed at NASA, stated that she believes young students must understand that astronaut careers aren't the only way to go to space. "I want them to know all the other things out there so they can find a passion and be inspired to join us in our exploration."

Mohan stated, "The best thing about it was the way that each episode turned what you thought you knew about universe on its head and made you realize that there was so many more out there than you could understand." "What we know now about the universe is vastly different in the vastness of it, right now." What excites me the most about our missions is finding that knowledge in any form it might come in.

Mohan, an Indian-American, arrived in the United States as a one-year old with her family. She said that she felt "bifurcated" after she had lived in two cultures at home and one at school. Mohan said that space exploration was her way to seek a better world and inspire the youth around her.

Mohan stated that it was a process of soul-searching, being open with myself, and being honest about my passions and abilities, that was required throughout his childhood. "Not to accept what I was told I should do or what I believed I needed to be, based on my culture or upbringing, but what I truly wanted for myself."

Jonny Kim, an Astronaut, also took part in the panel. He recalled how he struggled growing up to be the best version of himself because he had difficulty finding his identity.

"My parents were immigrants, and I felt like I was in a different world culturally. The warrior culture of being a Navy SEAL appealed to me so I decided to try it. He said that he had discovered a bit of himself.

Kim said, "I discovered the good and the bads in humanity, of human struggle and was inspired to become an a physician from that place." "And I discovered NASA. NASA was a platform that allowed me to do what I love, which is to seek out hard things and challenge myself to make the world better.

He said that he didn't expect to become an astronaut as a child. The Korean-American didn't see himself in the three white faces of the wall, despite having a photo of the Apollo 11 crew pinned to his bed. "We don't want to think about it if we don't find someone we can relate to in the places that we want to go or the things we are striving to achieve." He said, "It's just how it is."

Takei challenged NASA employees (and everyone listening in) that they bring the diversity of space exploration to other problems on Earth. It's amazing that we're out there. Gene Roddenberry's vision of 'Star Trek' inspired us to see the importance in infinite diversity and infinite combinations coming together. We need your kind of minds to work on the social justice issues that we face in today's society.

Diggs responded by saying that NASA must continue to think creatively in order to attract diversity as there are many qualified people. It's important to put some thought and effort into this, thinking about how we can address these problems as well as the exploration we are currently doing.

Mohan said that NASA is still trying to make society more diverse, but it is not yet finished. She also noted that there is always the temptation to hire people just like you, which is a bad bias. She warned that if we seek only like-minded people, "we won’t have the diversity in mindset, we won’t have diversity of thought, which will allow us to think outside of the box to solve these difficult technological problems."