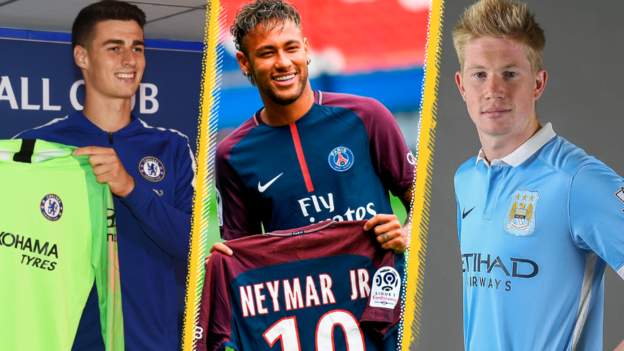 Over the last decade, more than 38 billion dollars ($48.5bn), have been spent on transfer fees around the world. The top spenders were the English clubs.

Fifa, the world's governing body, conducted extensive research on transfers between 2011 and 2020.

Chelsea and Manchester City topped the list of most-spending teams, the two Premier League clubs in the top 30, respectively.

According to the report, Southampton ranked 21st overall in the table and spent more than Borussia Dortmund.

This report commemorates a decade since Fifa's Transfer Matching System was launched. External-link

Fifa made it mandatory to start recording player transfers between clubs in October 2010.

There have been more transfers of Brazilian footballers (15,128) over the last decade than any other country.

According to the report, Neymar is the only player who has been sold for more that $200m (currently 145m).

Romelu Lukaku, a new Chelsea signing, was bought for a club-record fee of 97.5m on August 12. He will not join Di Maria in being included twice among the most significant deals as his transfers to Manchester United (and Inter Milan) were less than $100m according to Fifa.

The most popular media stories other than matches are transfer deals.

The interest is concentrated around a small number of deals. Globally, less than 13% of the 17,185 transfers in 2020 were permanent and required a fee.

These are the highlights of Fifa’s 98-page report.
clubsfindsdecadefifamariapastfootballtransfersdispentplayerreportdealstransfer38bnplayersworldwide
2.2k Like