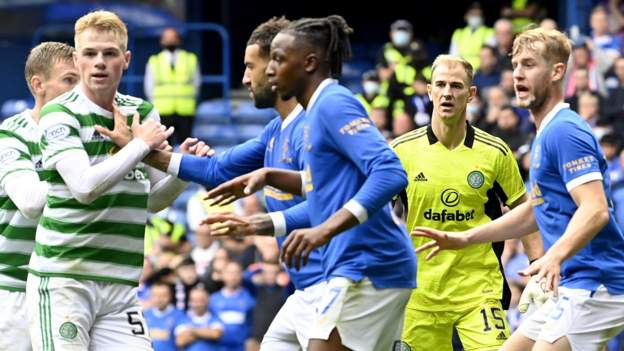 Rangers won their sixth match in seven Old Firm matches.
Rangers were closer to themselves than Celtic, but Celtic made up for it in the Old Firm derby, according the respective managers.

Gary McAllister, who was leading the Ibrox side along with Steven Gerrard, caught up in a Covid epidemic, paid tribute his side's mentality following Filip Helander's goal settled the game. He said, "You saw a club coming apart."

Ange Postecoglou, Celtic's head of recasting, regretted the turmoil in his squad. He said that six players had made their derby debuts and that "we've thrown in guys at times".

McAllister was delighted with the way his players responded to their Covid issues, which had been a difficult start to the campaign.

Sky Sports: "We've had a lot of pressure on us over the past two or three games, but I felt we were more recognisable today," said he. "It's a huge boost in confidence, and the manager's very happy."

Rangers move to within one point of Hibernian, Hearts and Rangers at the summit. Celtic is sixth after two losses in four matches.

Rangers' viewpoint: "From 1 to 11, we were outstanding"

Gerrard was not only absent, but goalkeepers Allan McGregor, Jon McLaughlin and captain James Tavernier were also missing.

McAllister admitted that he wasn't sure who would be available on Sunday, but McCrorie kept the score clean for his second appearance with the first team and Leon Balogun performed admirably at right back.

"I thought we were exceptional from 1 to 11. Leon was my favorite. He was outstanding today and gave a great performance.

Robby has shown a lot of maturity and we've noticed a significant change in him. He is more outgoing and feels like he belongs. He is a striking figure in the goal. He was so grateful to Livingston for loaning him last season.

The Celtic perspective says, "We'll settle down to start building."

It was Celtic's second loss in four Scottish Premiership matches, their worst start to a Season since 1997-98. Postecoglou became Parkhead manager for the first time since Tony Mowbray's 2009 defeat.

The Australian felt frustrated by the missed opportunities his side had, Odsonne Edouard in particular and Kyogo Furuhashi missing out on golden chances. He acknowledged that Edouard was the better choice, but he should have started the Japanese in the middle.

"It was important to achieve the first goal. We didn't. Sky Sports reported that we had to pay the price. "Unfortunately we fell behind, but we had some good chances towards the finish."

Postecoglou said, "As soon the window closes, we'll settle down our squad and start building for next batch of games." We need to get on track and win games, especially in the league.

The pundit opinion: "Not much in it"

Derek Ferguson, a former Rangers midfielder: "Whatever Gary McAllister told them at half-time, the they came out fired up. It was so obvious. They won every ball and were pinning Celtic back.

"I thought it would be a simple set piece, but Rangers had a lot to do because Celtic were there."

Pat Bonner, former Celtic goalkeeper: "Celtic did a good job defending open play but the more set-pieces that they gave away, it seemed like Rangers would have that opportunity." Filip Helander is given a free run at the goal; no one picks him up.

"But Celtic did have the character to come back in the second half. I believe they should have had an draw." Rangers managed the game more well than them at some points, but they were just as good as Rangers at other parts.
celticfirmmcallistertodaychampionsstartthoughtseasonrangersoldpaypricesecondunfamiliarityrecognisable
2.2k Like