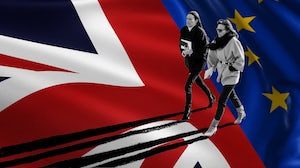 LONDON, United Kingdom - Negotiators from the UK reached an agreement with officials in Brussels Thursday that could pave the way for Britain to finally break 46 years of ties with the European Union. But Northern Ireland's Democratic Unionist Party said it still can't support the deal.

That makes the parliamentary arithmetic a lot tighter for British Prime Minister Boris Johnson, who needs the backing of the House of Commons in a vote expected Saturday in order to deliver an orderly Brexit on October 31.

Three DUP officials said their party won't support the deal, saying they were unhappy about customs checks in the Irish , among other things. Johnson's been defeated in a string of crucial votes since taking office in July and lost his majority in the chamber. Nevertheless, the prime minister announced the agreement with an upbeat tweet.

Appearing with European Commission President Jean-Claude Juncker in Brussels hours after the deal was confirmed, Johnson called it "a reasonable, fair outcome that reflects the large amount of work undertaken by both sides."

The UK would leave the EU "whole and entire" on October 31, Johnson said, in a nod to the DUP's concerns.

Juncker said "there's no need for any kind of prolongation" to the deadline, adding that he was happy about the deal but "sad about Brexit."

Without his Northern Irish allies, Johnson needs to pick up roughly 61 votes from a pool of about 75 deputies who might be persuaded to join him - that will involve persuading hold-outs in his own party to side with him rather than the DUP. It's the final, treacherous hurdle for the UK leader to clear before he can complete his ambition of leading Britain out of the EU.

The pound rallied on news of the deal, touching $1.2990 before dropping again as the scale of the remaining challenge became clear. It traded 0.3 percent lower at $1.2797 at 1:12 pm in London.

The withdrawal agreement was completed just in time for EU leaders to assess it when they meet later today in the Belgian capital. European Commission President Jean-Claude Juncker hailed it as "fair and balanced."

Pull it off, and Johnson will draw a line under three years of political turmoil since the UK voted to leave the world's biggest trading bloc. If he fails, Britain may be looking at another extension, though the prospect of a no-deal Brexit will also come into the equation again. Another delay would almost certainly lead to a UK election in the coming weeks, potentially followed by another referendum.

German Chancellor Angela Merkel said the deal "opens the possibility in an extremely difficult situation to protect the integrity of the single market and the Good Friday Agreement.

"It's an important sign for me that the Irish prime minister is satisfied," she said.

One theory doing the rounds in Brussels is that Johnson might ask the EU to rule out another extension. That would increase the pressure on undecided lawmakers Westminster to back his deal, but it would also raise the cost of failure dramatically.

Danish Prime Minister Mette Frederiksen however told reporters as she headed into the summit talks that it's not the EU's job to put pressure on domestic factions to help Johnson out.

In a revised political declaration, the two sides pledged to:

EU chief Brexit negotiator Michel Barnier told reporters in Brussels that he believes the deal can be ratified by the end of October. He called it a "fair and reasonable basis for an orderly withdrawal" by the UK.

In a nod to the painful wrangling of the past three years, he also compared getting the deal done to climbing a mountain.

Labour leader Jeremy Corbyn called for a second referendum, saying in Brussels that Johnson's deal - which he described as a "sell-out" - was worse than that put forward by predecessor Theresa May. Scotland's first minister, Nicola Sturgeon, said her Scottish Nationalist Party will vote against the deal as well, complaining that it creates too great a separation from the EU.