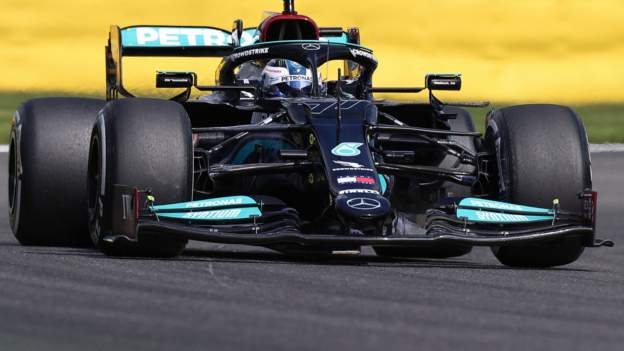 Last update on. From the section Formula 1
Live radio and text coverage of Belgian Grand Prix are available on the BBC Sport website

Red Bull's Max Vertappen was ahead of Mercedes' Valtteri bottas in the first practice at Belgian Grand Prix.

Bottas was 0.164 second faster than Verstappen. Lewis Hamilton, his title rival, was 18th after being stopped on his best lap.

Hamilton was able to avoid a crash, but Williams' Nicholas Latifi made him move wide towards the Bus Stop chicane.

Latifi did not appear to have seen Hamilton, the seven-time champion, as Hamilton followed him through the last part of the lap.

Hamilton is eight points ahead of Verstappen, but Bottas was on track to beat his time. He had to stop and he didn't try again.

Kimi Raikkonen, Alfa Romeo's driver, had an unusual incident when he struck the wall in the pitlane.

Finn, a veteran, appeared to steer the car straight into the wall using his left-front wheel. The car was then pushed into the wall from the opposite side by its right rear.

Raikkonen was able return to his garage, but he did not go back on the track following the incident.

Raikkonen had previously tried the La Source hairpin. This was mirrored by Yuki Tsunoda from Alpha Tauri a few seconds later.

Ferrari's Charles Leclerc nearly lost his chance when he ran wild at the Rivage righthander at its highest point. He managed to steer the car through the gravel, but he bounced back.

The track was dry, but the pit lane was wet from overnight rain. Showers are forecast for the remainder of the weekend.
incidentgrandlaphamiltonwallbottasleclercredwidetaurispittrackvaltteribelgianverstappenprixfastest
2.2k Like