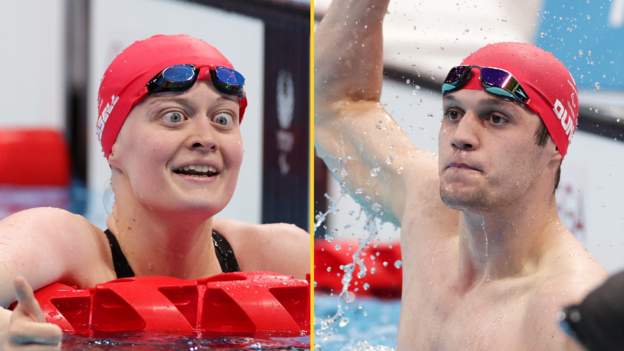 Reece Dunn and Hannah Russell both won gold in another day of swimming at the Tokyo Paralympics pool for British swimmers.

Dunn made up the difference in Wednesday's disappointment by finishing second in S14 butterfly. He won his first Paralympic title in S14 200m freestyle.

Bethany Firth finished second in the S14 200m freestyle race, but she was unable to retain her crown.

Stephen Clegg became the third family member to win a Paralympic Medal when he won bronze in the 100m S12 backstroke for men. He follows in the footsteps of his brother James and sister Libby who won in swimming and athletics respectively.

Russell, 25, won in one minute 8.44 seconds. This was 0.32secs faster than her fast-finishing opponent and earned her a medal at her third Games.

After winning two Rio golds, she took a break in 2018-2019 to address mental health issues. She told BBC Sport earlier in the year that the break was necessary to realize how much she misses the sport.

Russell was strong in the final, but it was her turn that kept her ahead of Pikalova. It was her strength that brought her to the wall first.

She said, "Deep down, I really, really wanted my title to be protected." "All the training really paid off. This has been the most difficult year of training that I have ever done.

"Because I have a visual impairment, it is really hard for me to see where someone is. It's me against the clock. Despite feeling the kick on the last bit of the turn, I could feel it on the next one.

"I kept thinking to myself, "Just keep fighting, keep fighting." "I couldn't feel my legs for the last 15m, but I kept going."

Dunn, who was diagnosed as an autistic teenager and made his Para-swimming debut only in 2019, admitted that he had had to deal with mental illness before the Games.

The Plymouth athlete said that she had Covid earlier in the year. "Then I went through a depression stage and needed to see a psychologist."

It makes it even sweeter

"I felt great. The whole swim felt great. But then, the pain started on the last half-a-length and I had to hold on."
turntokyoparalympicrussellhannahwonbbcparalympicsreallys14swimmerswintakinggoldtrainingreecelanddunn
2.2k Like