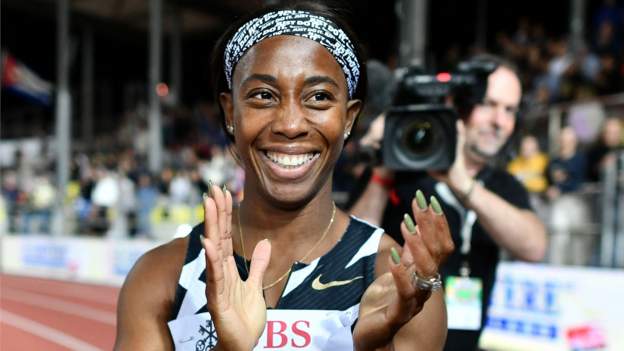 Last update on.
Shelly-Ann Fraser -Pryce was third fastest in women's 100m in history to beat Elaine Thompson-Herah at the Diamond League meeting in Lausanne.

Fraser-Pryce beat the Olympic champion by a remarkable 10.60 seconds.

Thompson-Herah, a Jamaican compatriot, was the fastest loser in the event's history at 10.64 seconds.

Fraser-Pryce held her pace on home stretch to beat Thompson-Herah, and set a personal record.

"I need to improve my technique. I will do more this season.

Thompson-Herah was 10.54 seconds at the Eugene, Oregon meet last week. However, she says that she does not plan to break Florence Griffith Jones' world record of 10.49 secs.

She said that her body was feeling tired from a long season, especially after having completed a personal record four times in one month.

"I don't have any plans to break the world record, and I never imagined getting close." I will continue to work hard, finish the season strong, and return stronger next season.

After failing to clear 5.82m, Armand Duplantis from Sweden finished fourth in the men's pole vault.

Duplantis won the gold medal in Tokyo last year and was awarded the title in the Diamond League last year. This is only the second time that Duplantis has not been crowned first in any of his 30 previous competitions.

Ingebrigsten was the season's fastest at seven minutes 33.06 seconds, and took top spot.

Ryan Crouser, a Tokyo gold medallist from the USA, won the men's shotput after setting a meet record with his 22.81m opening throw.

Next meet will be in Paris on Saturday. Dina Asher Smith, Britain's representative for the 100m, returns to the line-up.
recordfastestwomenstookrunsthompsonherahleaguebestseasonolympic100mdiamondwonplacemenshistoryshellyannfraserpryceran
2.2k Like