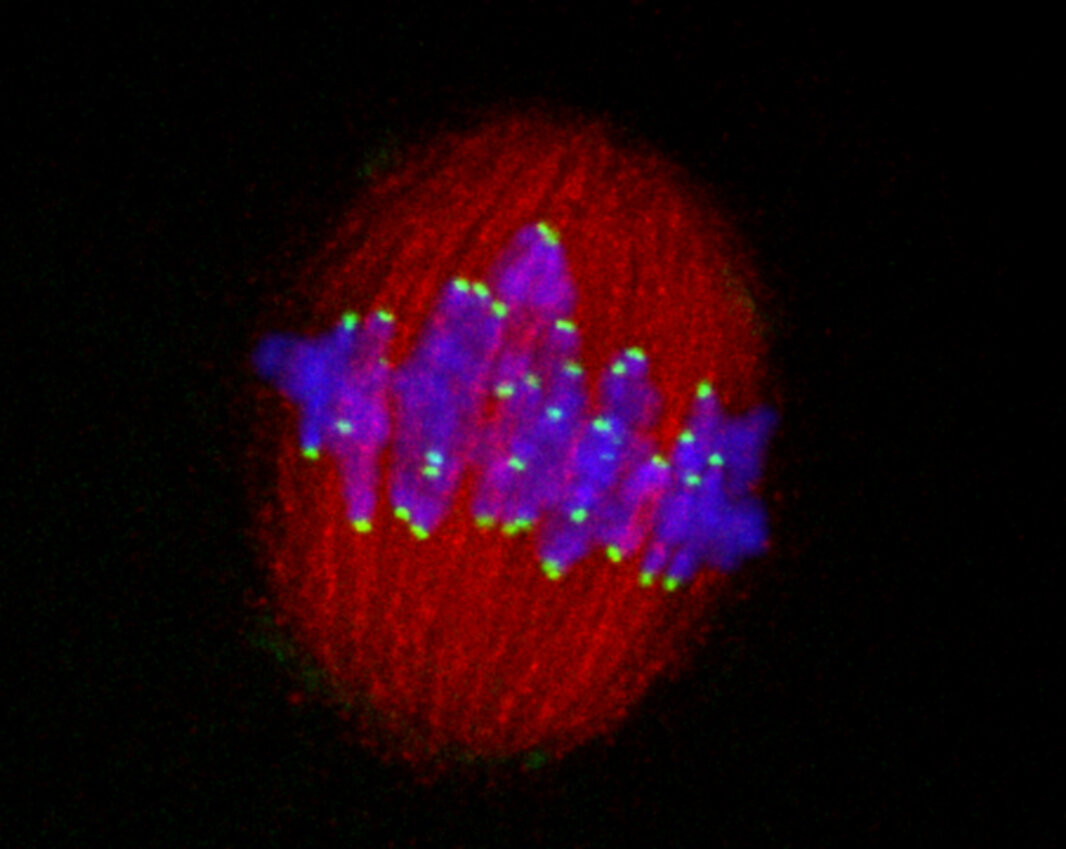 We assume that each of our 23 chromosomes is a 50-50 chance of getting into our reproductive cellseggs or sperm. But this is not true. Penn biologists have revealed how proteins evolved to suppress cheating and maintain even odds in a new study. Credit: Jun Ma
Although eggs and sperm are unique cells for many reasons they are also special. One of their distinguishing characteristics is that, unlike other human cells which have two copies from the mother and the father of 23 chromosomes each, these sex cell, or gametes, only have one copy.

Michael Lampson, Penn's School of Arts & Sciences' School of Science, conducted previous research that showed that these chromosomes are not passed on by chance to gametes. However, certain factors can tip that scales making it more likely that one of two copies will be passed on to the next generation.

Lampson and his colleagues have discovered a mechanism that balances the meiosis process, which results in gametes. This increases the chance of a certain chromosome being in a viable egg by 50-50.

Published in Cell, the study found that while there is a mechanism that gives certain chromosomes an advantage during meiosis (the journal Cell), another parallel pathway suppresses that advantage. Researchers believe that proteins acting in both pathways are in an evolutionary arms race to prevent biased chromosome inheritance, which could lead to errors and abnormalities in eggs. This could, in turn, avoid birth defects.

Lampson says, "If we consider these chromosomes getting in the egg selfish, it implies that they're maximising their own transmission at some expense to the organism overall." "If there's a cost, there might be other genes that are under pressure to suppress or suppress those selfish genes."

This work was based on a Science paper published in 2017 in which Lampson and his colleagues described the mechanism that causes an asymmetry in the meiotic spinningle. A structure made of microtubules, which pulls chromosomes into opposite sides of cells before division, this current research aimed to find that suppressive pathway. This caused biases in chromosome transfer. The researchers found that the "selfish" centromeres (the part of the chromosome attached to the spindle) were more likely to be able detach from the cell and reattach to it. This is in contrast to "unselfish", which attach to the polar body.

In a paper published in Cell in 2019, the researchers provided more information about the process. The selfish centromeres could bias transmission by recruiting proteins that destabilize attachment to the spindle. This increased the likelihood of the centromeres ending up in the egg instead of the polar body. These proteins were instrumental in the centromeres' disconnection from the spindle.

Lampson states that "we had this understanding of selfishness working," so we wanted to know how suppression works in the new paper.

Research had previously shown that certain proteins that act on the centromere were rapidly evolving in different animal species. Lampson and his colleagues suggested that this rapid evolution might be evidence of a "arms race” between selfish and suppressive elements, similar to what can be seen in the immune response to changing threats from pathogens.

Lampson states that it was unexpected to see a lot of rapidly evolving proteins at the centromere. This is because one would expect them to be highly conserved as they are so crucial in cell division. It's a sign of the arms race just like in the immune system. If selfish centromeres want to cheat, then there will likely be proteins that are evolving to counteract that suppression.

Researchers knew that the kinetochore pathway was responsible for recruiting effector proteins to the centromere, which can bias chromosome transfer. They looked at heterochromatin, a tightly packed DNA that recruits proteins to the centromere, to find a suppressive pathway. The researchers modified an enzyme in each pathway to test if the heterochromatin pathway could be counteracting the biasing effects of the kinetochore pathways.

Lampson states that "there seem to be subtle changes at work," because both pathways are crucial. It's impossible to kill the kinetochore pathway, which is essential for cell division. However, you can reduce the chance for centromeres being selfish. Evolution seems to be responding to both of these pressures simultaneously.

Lampson states that the findings reveal the evolutionary battlefield within our bodies. It's fascinating to see how selfish parts of our genomes play essential roles. These fundamental aspects of cell biology are actually a reflection of competing pressures.