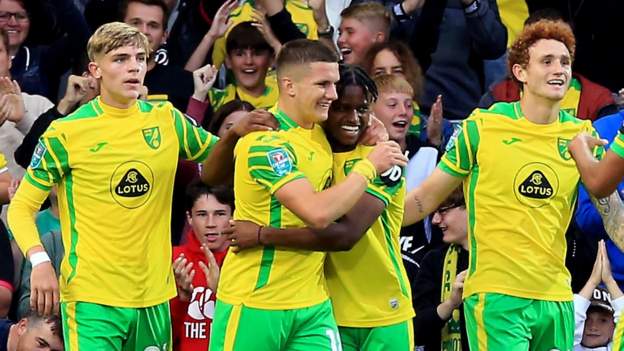 The Canaries led 3-0 before half-time thanks to goals from debutant Christos Tezolis, Kenny McLean, and Lukas Rupp.

Josh Sargent added another on his full debut, before Tzolis doubled the personal tally.

Sargent, a 21-year-old US international, added his second and sixth to Norwich's total with 15 minutes left.

Tzolis, a 19-year-old Greek winger, was a threat all through, opening the scoring via a heavy tackle on Zeno Ibsen Rosi, Cherries defender.

Williams, a full-back, completed his Old Trafford loan move on Monday. He was also involved in Norwich's second. Dowell and Kieran Dowell worked well together in the buildup to McLean’s long-range drive in the top right corner.

The hosts added another five when Sargent capitalized on Nyland’s errant pass to tee off Tzolis. He then returned the favor for the American to complete his scoring.

Bournemouth defeated Norwich to reach the 2018-19 quarterfinals. However, they managed just one goal in the 90-minute period as debutant Brennan Camp sent a tame header straight at goalkeeper Angus Gunn.
tzoliscupbournemouthsargentnorwichminutescitywilliamsaddedruppnorwichs60carabaosecondpass
2.2k Like