Mathematicians build an algorithm to 'do the twist' 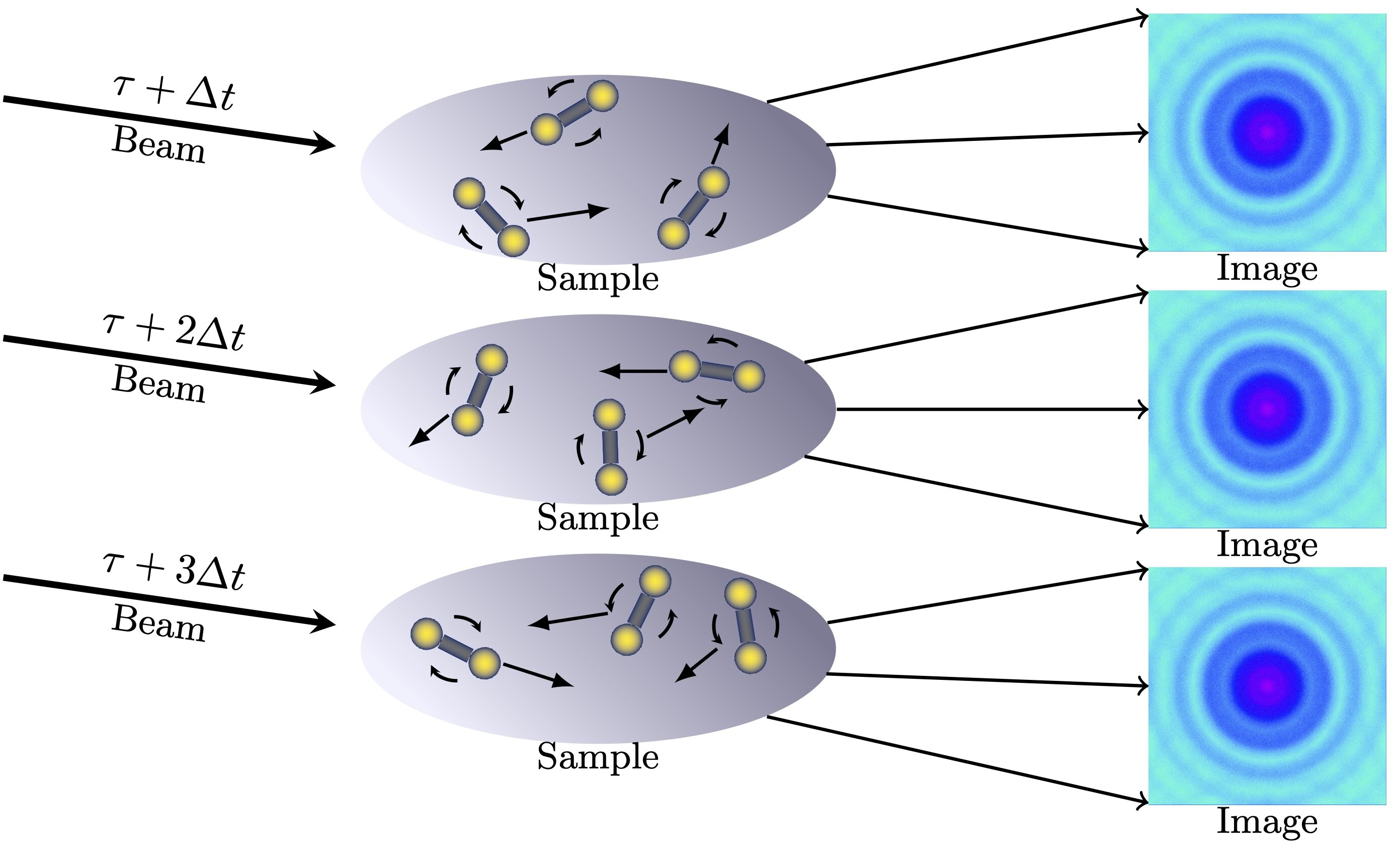 Illustration of the XPCS experiments. Variation of the speckle patterns can be caused by the translation and rotation within the scattering volume. These images look similar visually due to their noise-like grain. However, the MTECS algorithm can detect tiny variations in patterns and analyze them. Credit: Zixi Hu, UC Berkeley
The Center for Advanced Mathematics for Energy Research Applications at Lawrence Berkeley National Laboratory (Berkeley Lab), has developed a mathematical algorithm that can decipher the dynamics of twisting particles within large complex systems using X-ray scattering patterns from highly sophisticated Xray photon correlation spectroscopy spectra (XPCS).

These experiments, which were designed to examine the properties of suspensions and solutions of macromolecules, colloids, and polymers, have been identified as the key scientific drivers for many of the coherent light source upgrades that are currently taking place within the U.S. Department of Energy. New mathematical methods developed by Zixi Hu and Jeffrey Donatelli (CAMERA) have the potential of providing far more information than previously possible about the properties and function of complex materials.

Brownian motion is a process where particles suspended in water undergo jiggling and translation. These random fluctuations, which are dependent on the structure and shape of the materials, have information about dynamics that can be used in molecular biology and drug discovery as well as materials science.

XPCS works by focusing a coherent beam X-rays to catch light scattered from particles suspended in water. The resulting speckle patterns are picked up by a detector, which contains small fluctuations in the signal that provide detailed information about the system's dynamics. This capability is being exploited by the upcoming coherent source upgrades at Berkeley Lab’s Advanced Light Source, Argonne’s Advanced Photon Source, and SLAC’s Linac Coherent Light Source. These experiments will take advantage of the extraordinary coherence, brightness, and precision of the XPCS.

How do you extract useful information from these images once you have collected the data? The temporal autocorrelation is a reliable technique for extracting dynamical information from XPCS. It measures the change in speckle patterns over time. The autocorrelation function combines the still images, much like a movie. It works by watching closely related postcard images pass by.

The current algorithms are limited to extracting translational movements. Think of a Pogo stick leaping from one spot to the next. But, none of the previous algorithms could extract "rotational diffuse" information about how structures spin or rotateinformation that is crucial for understanding the function and dynamical characteristics of a physical system. This hidden information can be difficult to find.

Turn the light off

Experts came together in February 2019 for a CAMERA workshop about XPCS to discuss emerging needs in the field. This was a breakthrough. Rotational diffusion extraction was a major goal. Hu, a UC Berkeley math student; Donatelli (the CAMERA Lead in Mathematics); and Sethian (UC Berkeley Professor of Mathematics and CAMERA Director) came together to tackle this problem head-on.

Their work resulted in a new algorithmic and mathematical approach to extracting rotational information. It works in 2D, but can be scaled to 3D. The method predicts simulated rotational diffusion coefficients within a fraction of 1% using remarkably low numbers of images (less than 4000). The algorithm was published in the Proceedings of the National Academy of Sciences on August 18.

It is important to look beyond the autocorrelation function and instead seek the additional information about rotation in angular–temporal cross–correlation functions. These functions compare the changes in time and space between pixels. This is a significant leap in mathematical complexity. Simple data matrices become 4-way data tensors. The theory that relates the rotational information with these tensors requires advanced harmonic analysis, linear algebra and tensor analyses. Hu created a sophisticated mathematical model to describe how the angular and temporal correlations function as a function the new complex rotational dynamics.

Hu stated that there were many layers to be solved in order to create a mathematical and algorithmic framework that could solve the problem. Hu said that there was both information about static structures and dynamic properties. These properties had to be systematically accessed to create a coherent framework. They offer a great opportunity to combine many mathematical ideas. It was great fun to find useful information in a noisy environment that seemed overwhelming at first.

It is difficult to solve this set of equations in order to recover the rotational dynamics. There are many layers of math problems that make it challenging to solve them all. The team used Donatelli's previous work on Multi-Tiered Iterative Projections to tackle the problem. This is a method that solves complex inverse problems. It is meant to find an input that produces an observed outcome. The idea of M-TIP is to break a complex problem into subparts, using the best inversion/pseudoinversion you can for each subpart, and iterate through those subsolutions until they converge to a solution that solves all parts of the problem.

Donatelli stated that "The most powerful thing about M-TECS is the fact that it uses the fact that the problem can easily be divided into high-dimensional linear and low-dimensional nonlinear or nonconvex parts. Each of these parts have efficient solutions, but would become an extremely difficult optimization problem if they were all solved at once."

M-TECS can efficiently determine rotational dynamics using complex equations. Standard optimization methods would be difficult to use due to their inability to both convergence and computational cost.

Open the doors to new possibilities

"XPCS, a powerful technique, will be prominently featured in the ALS Upgrade. This work opens up a new dimension for XPCS and will enable us to explore dynamics of complex materials like rotating molecules within water channels," Alexander Hexemer said, Program Lead for Computing at ALS.

Hu, the winner of the Bernard Friedman Prize at UC Berkeley for his work on this topic, is now CAMERApart of Berkeley Lab’s Computational Research Division as its newest member. Sethian stated that this type of mathematical and algorithmic codesign is the hallmark for good applied mathematics in which new mathematics plays an integral role in solving practical problems at a forefront of scientific inquiry.

This work is supported in part by CAMERA. It is jointly funded by both the Office of Advanced Scientific Computing Research (OASCR) and the Office of Basic Energy Sciences (both within the U.S. Department of Energy’s Office of Science.