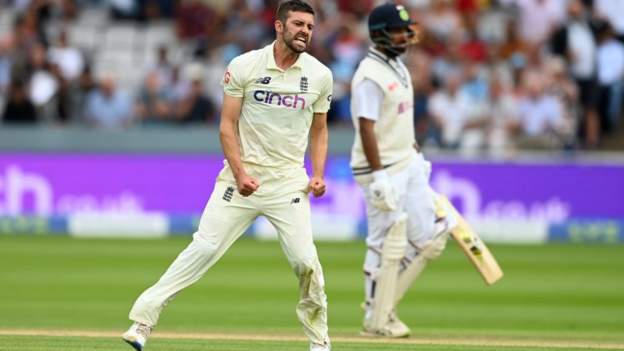 Last update on. From the section Cricket
After colliding with the boundary, Mark Wood injures his shoulder.

England's bowler Mark Wood was injured in the shoulder and has been removed from the third Test against India.

Wood injured his right shoulder during the fourth day's second Test at Lord's.

Wood has not been replaced by a replacement, as Saqib Mahmood (back-up seamer) and Craig Overton (replacement seamer) are already in the squad.

The 31-year old will stay with the Leeds team and continue his rehabilitation with the England medical staff.

Wood, who took five wickets during the series, will be evaluated at the end.

He is the latest member of England's injured list, as Stuart Broad and JofraArcher, Olly Stone, Chris Woakes, are all out of Joe Root's squad.

England lost by 151 runs in the second Test after drawing the first match of the five-Test series.
woakesupdatedunavailableshouldersecondwoodteamenglandtestmarkbowlerwicketsleedsenglandinjury
2.2k Like