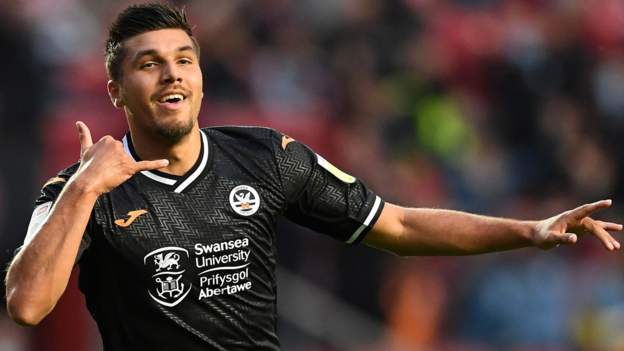 Last update on. From the section Championship
Swansea City won the Championship for the first time this season.

The Swans resisted intense pressure from the home team before Joel Piroe's brilliant first-half rebound gave them the lead.

After the break, Bristol City was determined to press. Andreas Weimann was among those who threatened to stop it. Yellow cards were piled up on both ends as tempers flared.

In the final stages of the match, the hosts were desperate for an equaliser. However, Swansea managed to repel their last attacks with relative ease.

After losing two of their three league matches under Martin, Swansea's first win felt significant at this stage of the season. The coaches and players celebrated the victory with their large and vocal contingent of supporters at the final whistle.

Bristol City was left with a lot of missed opportunities as they are still winless at home since January.

Nigel Pearson's men may have been optimistic of ending that run against Swansea, who had struggled with Martin's complex style of play since his MK Dons arrival.

A strong ethos that is based on possession and the determination to defend whatever situation presents itself. Martin has only been with us for three weeks so his skills are still a work in process.

This was evident in the Ashton Gate opening exchanges, when the visitors appeared overwhelmed by the energetic pressing of their opponents.

After Chris Martin had hit a long-range shot wide from close range and James had a header saved by him, Benda gave possession back to James before diving low to his left to deny James again.

Despite the attacks on Bristol City, Swansea won.

Piroe was given the ball at the right touchline and drove infield. He fired a powerful, left-footed shot that bounced off the bottom of the post and out towards the penalty area. The Dutchman then made a great first-time effort to beat Dan Bentley in the Bristol City goal.

After that goal, Swansea felt more confident and Piroe was denied another when his short-range shot from a corner by Bentley was brilliantly saved.

Martin's team seemed content with their halftime lead, but they had to fight hard to keep it when Bristol City took control of the second half.

Weimann missed a shot, but Benda flung another from James into Benda. As the hosts tried to equalize, the heat in the stands grew, and Ashton Gate became louder.

As referee Geoff Eltringham was criticized by both sides, Swansea received six bookings while Bristol City got four.

The travelling Swans fans were the ones who won the day, and they stayed on the field long after the whistle blew to greet their team and manager.

"Being brutally truthful, I didn’t like some of this, I think that it’s the worst thing we’ve done with the ball.

"We didn't care enough about it, so we turned it over too often. We were anxious. There was a lot tension.

"We have a lot of tired players, and we're on TV and people want to win that win."

"We are going to improve upon that. That will help to reduce the anxiety and tension that we felt tonight."
sealsrussellshotcityswansjoelashtonmartinbristolswanseapiroelotfinalwinjames
2.2k Like

EFL 2021-22: Choose who you think will get promoted from the Championship, League One and League Two

Terry Cooper: Former Leeds and England defender dies at the age of 77