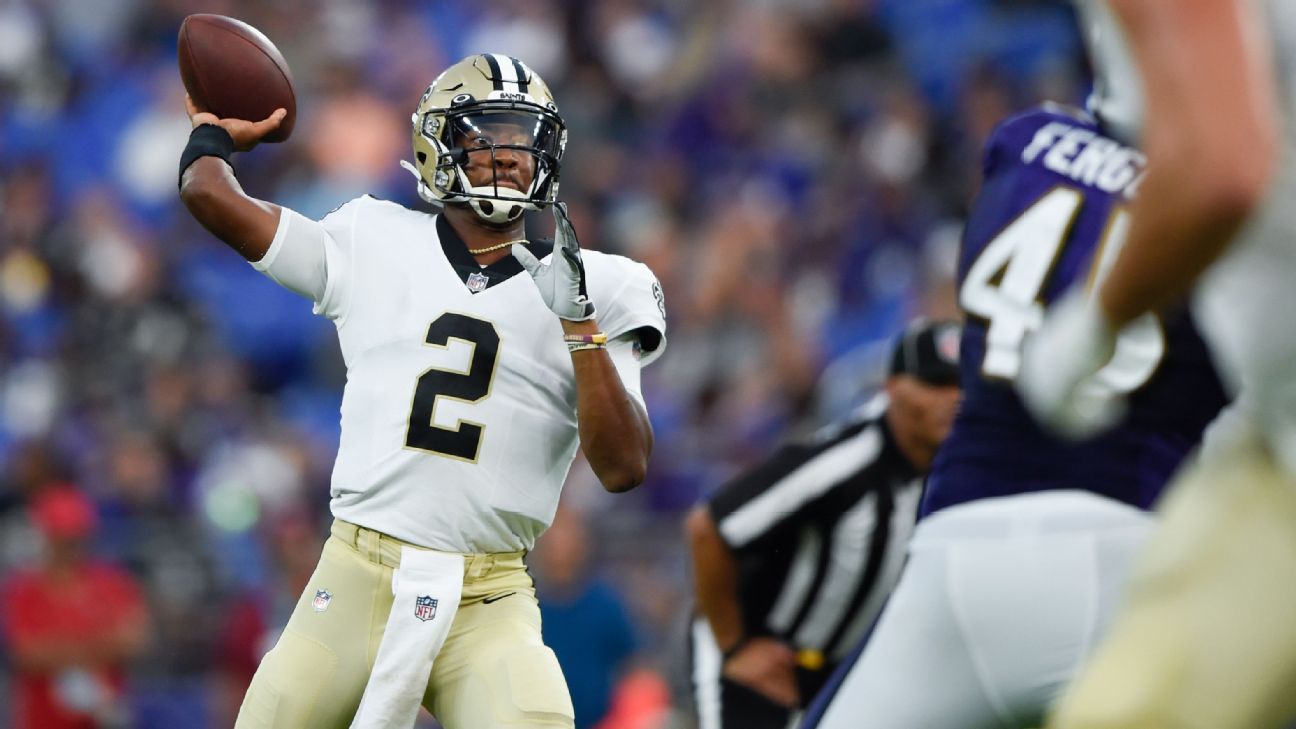 Taysom Hill was the first to start the preseason. Jameis Winston was the first to throw a touchdown pass. However, neither of the New Orleans Saints' quarterback candidates was able avoid the turnovers that cost them a 17-14 defeat at the Baltimore Ravens.
As part of the Saints' six turnovers, each QB had to throw an interception.

Coach Sean Payton stated after the game, "I'm no one to compare with the quarterbacks." "It doesn’t matter who played better, really. With six turnovers, it's not important."

Officially, it was either a tie or slight win for Winston. After both QBs made some great plays, it was likely a tie. The competition is still close as they enter Round 2. Winston will start at Jacksonville on Monday night.

Winston, Hill, and Payton all agreed that they would find good things in the film. Winston's touchdown drive just before the warning, and Hill's remarkable opening drive that concluded with a Latavius Murray pass inside the Ravens' 10 yard line were two examples of some of the highlights.

The interceptions were not solely the fault of either quarterback.

Hill and Ty Montgomery, receiver, got their signals across on a hot read throw. Montgomery was sat in middle of field and Hill expected him not to stop running.

Winston, on the other hand, threw Humphrey a deep ball that looked slightly underthrown, but it bounced out of Humphrey’s hands and into safety's arms.

"It's difficult to talk about more than six turnovers at first glance. Hill said that there were "just a bit of confusion" regarding the interception.

Hill stated, "I expected him to keep on the move in that manner, but he thought it was better to settle down." Hill said, "I think these are the things that it's nice for us to see in a Preseason Game, so that we can ensure that between our rooms and that room that everything is on the same page."

Winston was even more direct when Winston was asked about his interception. He said, "Has got to be a better football -- and it will."

Winston credited Saints offensive coach Pete Carmichael Jr. for his TD pass. He patiently looked to one side before turning to hit a Humphrey in mid-air.

Winston said, "Great play by Pete." He also praised Tony Jones Jr. and the offensive line for their efforts on the scoring drives. "We ran it a little further out than I expected, but it was great timing. LJ opened up on the back end. We put pressure on them, so they went in man-to–man coverage. We got a great one."

Winston made two excellent throws on the TD drive earlier -- a 26-yarder to Montgomery, between two defenders and a 33 yard strike to Juwan Johnson, tight end.

Hill's best throws were to Marquez Callaway in New Orleans, the summer's breakout receiver. Callaway caught three passes for 61 yard on the first drive. Conversions on third and-9 and third-and-7 also came from Hill.

Both QBs had their moments of brilliance when they were able to escape pressure and get deeper into their progressions. Each QB had at least one off-target throw. Each person took one bag.

The game was a mirror of the first two weeks' training camp practices. Winston reached higher heights with some flash plays and standout sessions. However, neither QB has yet to do enough to win or lose the competition.

Hill stated, "Look, there's a lot of talk about a competition." He was asked by the media gathered in the postgame conference area if he had any different thoughts while fighting for the job. I think it's about going out and playing my best football every evening. It doesn't matter if it's in a competition, or not. My goal is to do my best for my teammates. It's the same year every year.
orleansyardsturnoversplaysthingsgoodtdmixlosswinstoncompetitionjameishilldrivesaintsendtaysom
2.2k Like