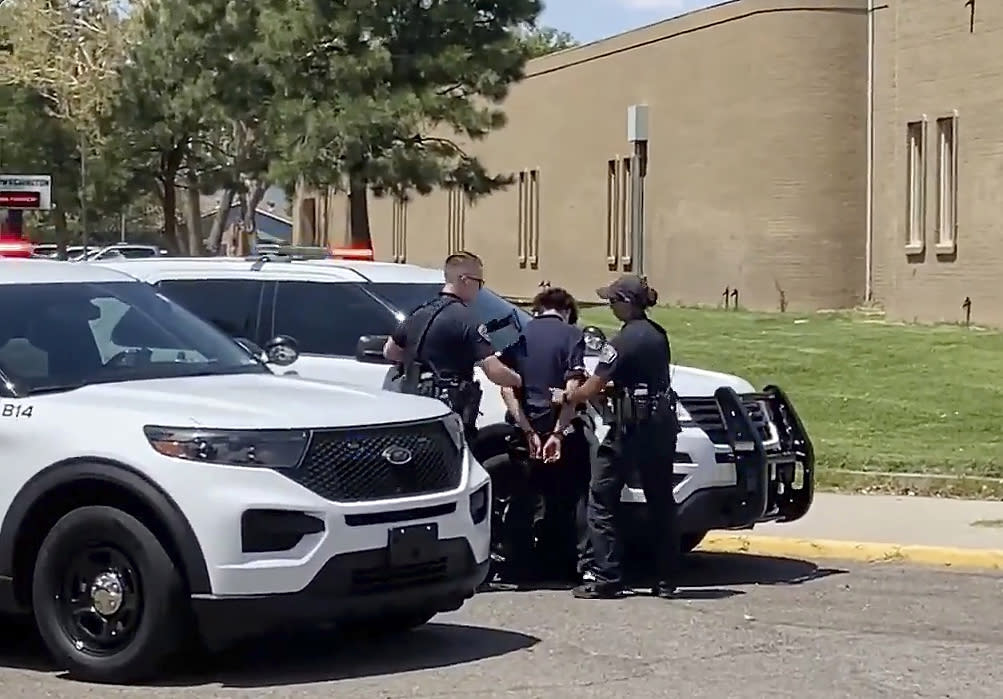 ALBUQUERQUE (NM) Just a few days in to the new school year, New Mexico's largest district is still reeling from a shooting which left one student dead, and another in custody. According to police, the victim was trying to protect another boy being bullied.
On Friday, the second shooting in Albuquerque occurred in 24 hours. The incident at Washington Middle School was during lunch. Top state officials described the shooting as a "scourge" and said that Albuquerque is on track to break its homicide record for this year.

Police Chief Harold Medina, a police chief, said that the boy who was shot to death, 13-year-old Bennie Hartgrove, was a hero.

Medina stated that he stood up for a friend, and attempted to calm down a violent confrontation among classmates. Medina said that the incident was a tragic event that had shaken our community.

A probable cause statement was released Saturday, stating that the boy, 13, was charged with open murder and unlawfully possessing a deadly weapon at school. The Associated Press doesn't generally report juvenile crime suspects.

After the shooting, a third witness, a 13-year old boy, said that Hargrove approached Hargrove to tell him to stop bullying and punching smaller boys.

According to the probable-cause statement, the witness stated that the suspect had a gun behind Hargrove's leg so Hargrove couldn’t see it. The suspect then opened fire on Hargrove multiple times with a revolver.

According to the statement, a school police officer heard the shooting and ran over to the boys to handcuff the suspect to a fence. He then radioed for help and treated the boy until the medical staff arrived.

Later, police learned that the suspect's father had found his gun missing just before the shooting and that he went to school to retrieve it. He arrived at the school to see his son, according to the statement.

According to the statement, the 13-year old witness told police that the suspect was a nice boy who used to pick on other boys. He also acted like he was part of a gang.

It was not immediately clear if the suspect had a lawyer who could speak for him.

Friday marked the third day for Albuquerque’s public schools district. Although students will not return to school until Tuesday, Superintendent Scott Elder stated that the staff is making arrangements to ensure students have access counseling and other support services.

According to police, more officers will be on hand when students return to school in order to provide security and for students to get any additional information.

On Thursday night, gunfire erupted at a restaurant and sports bar near an Albuquerque shopping area. One person was reported to have been killed and three others were hurt when a man pulled out a gun in a fight.

In this case, no arrests were made. Investigators reviewed surveillance footage and interviewed witnesses.

The victim was identified by authorities as Lawrence Anzures (30-year-old boxer from Albuquerque).

Friday's restaurant was surrounded by a temporary memorial of candles and flowers, which added to the sense of frustration felt by families.

These shootings occurred as Mayor Tim Keller met with other officials for his latest session to discuss curbing violence in the city. His administration hopes to make recommendations regarding improving the criminal justice system, and dealing with repeat offenders. According to the mayor's office, nearly 60% of suspects and more than 45% have criminal records for Albuquerque homicides.

Keller stated in a statement that we must increase diversion programs for low-level offenders and provide them with real access to resources to improve their lives. We must stop the revolving doors for violent offenders.