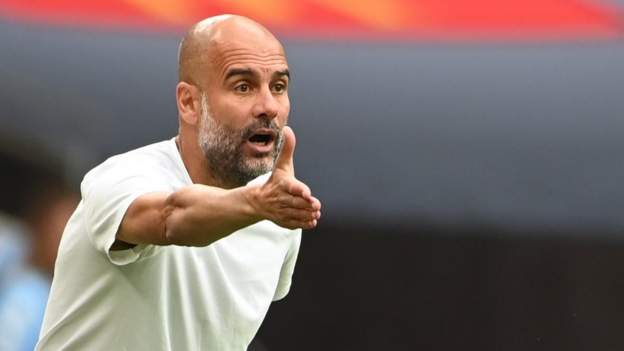 Pep Guardiola signed Jack Grealish 100m in Manchester City, during the Community Shield defeat at Wembley by Leicester.
Pep Guardiola, Manchester City manager, has asked the club's critics for evidence if they believe that the Blues are violating Financial Fair Play rules.

Thirteen months after City was banned from European competition for violating Uefa’s FFP rules for two years, questions are being raised about the club’s spending habits.

Guardiola stood by Jack Grealish, the England midfielder and broke the British record of 100m for City.

According to the Spanish manager, the deal was possible only because of the 60m worth of club sales over the past 12 month. This includes the 11m Borussia Dortmund received following Jadon Sancho's move from Manchester United.

Liverpool manager John Kelly said that his club cannot be compared with City because they "obviously have no limits".

The City boss stated that FFP has made it difficult for them to reach their limits. "We're all on the same page. Each club then decides what it wants to do. We have all passed the controls each season. We will prove that we are wrong if we are.

Guardiola clearly feels that the criticisms of City's Abu Dhabi-based ownership are triggered by clubs whose owners don't want to invest on the same level.

He said, "I have stated before, there are some owners who want to the benefits themselves," ahead of Sunday's Premier League opener against Spurs (16:30 BST).

"Our owners don’t want to lose any money, but they will spend if they have the funds.

"Before it, there was only one club or two or three or four or five. Other clubs came along, such as Chelsea with Roman Abramovich and us with Sheikh Mansour. They want to be part of this world. What's the problem?

"No guarantees of success"

Many feel that City's spending is threatening to make them more competitive than almost all other clubs.

Guardiola also rejects this theory using his Champions League wins with Barcelona in 2009 & 2011.

He said, "There are no guarantees." You can win with different teams, different players, and different situations.

"I had Lionel Messi in Barcelona. He was the best player I have ever seen." With seven academy players, we won the Champions League twice. Each club is unique.
spentchallengespepcitycriticsguardiolamanchestercitysownersmanagerclubclubsspendingleague
2.2k Like