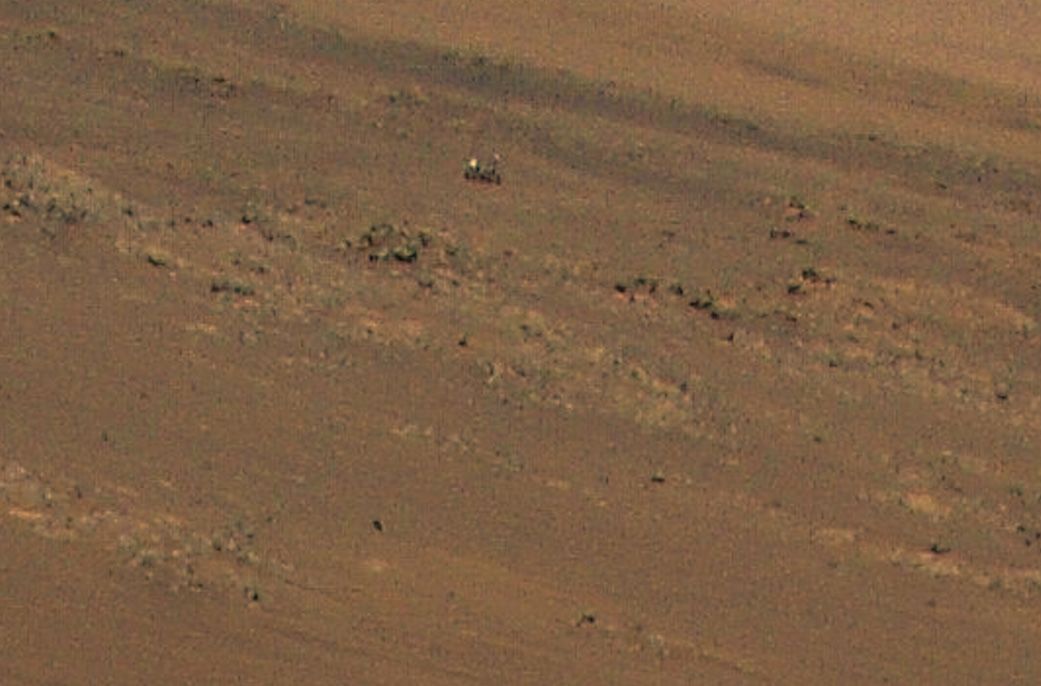 This image was captured by NASA's Ingenuity helicopter during its 11th flight to the Red Planet on Aug. 5, 2021. (Image credit: NASA/JPL-Caltech)Can you spot the Mars Rover in this NASA Ingenuity helicopter view?The little helicopter flew over the Red Planet 11 times last week and was able to see NASA's Perseverance Rover, which arrived in Mars' Jezero Crater on February 18."Ingenuity's aerial images are amazing, but even more when you get the chance to play 'Where is Perseverance?' Robert Hogg, an engineer from NASA's Jet Propulsion Laboratory, Pasadena, California said that the images were amazing and even more so when you can play "Where's Perseverance?" You can see details like the wheels and remote sensing mast on the rover's aft end.Video: Ingenuity and persistence during the 11th Mars flightIngenuity flew 39 feet (12 m) above the Martian surface at the time of this photo, approximately 1,600 feet (500 meters) from the rover.NASA's flight plan states that the helicopter took off at 12:50 EDT (0450 GMT). It flew north-by–northwest for 130.9 secs, traveling an average speed of 11 mph (18 km/h) according to NASA.Zoomed in view of Ingenuity’s photo shows the Perseverance Rover off in the distance. (Image credit: NASA/JPL-Caltech)NASA officials stated that Flight 11 was "essentially designed to keep Ingenuity in front of the Rover, allowing it the continue supporting Perseverance’s science goals by photographing interesting geologic features from above," the statement said.The helicopter will likely fly over this area of Jezero Crater (also called "South Setah") at least once more during its mission to the Red Planet.Send Hanneke Weitering an email at hweitering@space.com. Follow Hanneke Science on Twitter @hannekescience. Follow us on Facebook and Twitter @Spacedotcom
epicimageflightperseverancered11thnasasvideopalviewspotsroverhelicoptermarsingenuity
2.2k Like