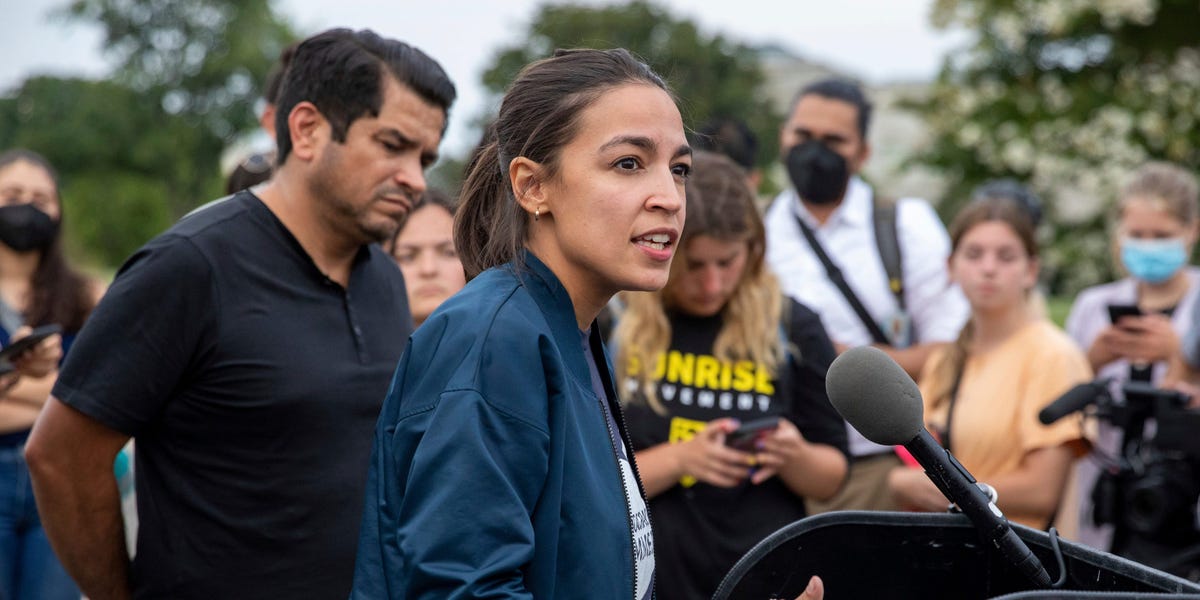 AOC and House progressives criticised their moderate Democratic counterparts for "concerns” over the $3.5 trillion infrastructure bill.Moderate lawmakers would like to see a separate vote on the bipartisan $1 trillion infrastructure bill.Speaker Pelosi committed to simultaneously bringing up both bills on infrastructure.10 Things in Politics: Get the latest news in politics and economics Loading... Click Sign up to receive marketing emails and other offers from Insider.Rep. Alexandria Ocasio Cortez and the progressive House Democrats reacted to "concerns" from their moderate counterparts over the $3.5 trillion reconciliation package, which President Joe Biden wants to pass along with a bipartisan $1 Trillion infrastructure bill.Six moderates wrote to Nancy Pelosi, House Speaker, urging her to bring the bipartisan package which is close to passage in the Senate to a separate vote.Moderates expressed reservations about $3.5 trillion bill for "human infrastructure", which would finance priorities such as childcare and clean energy."As soon the Senate finishes its work, we need to bring the bipartisan infrastructure bill to a separate vote on the House floor. The letter stated that this once-in-a century investment should be given its own consideration without regard to any other legislation. Separately, we are concerned about the components of the potential package as we begin the reconciliation process.The bipartisan bill passed Saturday 67 to 27. It was supported by 18 Senate Republicans. However, reconciliation would pass the larger infrastructure package. This requires only a simple majority. Filibuster rules require a threshold of 60 votes to end debate.Continue reading: A complete guide to Joe Biden's White House staff of 600+ people and six-figure earnersThe Democratic Representatives Jared Golden of Maine and Josh Gottheimer in New Jersey are among those urging caution. Kurt Schrader from Oregon, Vicente Gonzalez, Filemon Vela, Texas and Ed Case, both from Hawaii, reported The Hill, citing a source who is familiar with the matter.Ocasio-Cortez (a two-term Democratic lawmaker from New York), was one of the progressives who responded to Ocasio-Cortez's moderate colleagues Sunday with a starkly different message.Ocasio Cortez tweeted, "If mods want the infra agreement to be destroyed, that's their business." This is difficult for some, but the US is not just a few suburbs. Communities outside of them aren’t disposable. It doesn't necessarily mean that something is bipartisan. Take a look at Wall St bailouts."The lawmaker cited "war", "tax cuts for rich," Wall St bailouts, and "fossilfuel giveaways" as examples.Ocasio Cortez stated that just because something is "bipartisan" doesn't mean it's intrinsically good for people, or worthy of passage. "Substance is important."New York Freshman Rep. Mondaire J. Jones retweeted it on Twitter and responded with a clear answer: "No."Jones also tweeted about the importance of passing the larger infrastructure package.He wrote, "Wondering how many Americans would know which infrastructure bill was bipartisan' versus those who will know if Medicare was expanded, cost-effective child care became available, and the planet was saved."Arizona Representative Ruben Gallego was equally forceful, stating that there would be no deal if both bills were considered simultaneously.He tweeted Saturday, "Both move together. Or nothing moves."Minnesota's Progressive Rep. Ilhan Olmar also joined the discussion, stressing that it was time to act.She tweeted, "Reconciliation bill must be tied to infrastructure bill if moderates want to pass the bill." They can't destroy the Democratic agenda if they want. All across the country, Dems want to see their campaign promises and investments in the care industry fulfilled. It is time to act.She said, "People voted to have Dems legislate, not defer to republicans." Bipartisan legislation isn't able to provide the investments promised both by the administration, and Democrats in Congress. @LeaderMcConnell has an obstructionist agenda and Dems should #safeguard against his influence."Pelosi maintained that she would not bring up the bipartisan Infrastructure bill in the House until the larger reconciliation package has been passed. She also maintained this position during Friday's press conference.She said, "Bravo for whatever you can accomplish in a bipartisan manner." We salute it. We applaud it. We are hopeful that this will be a reality soon. We aren't going to leave anyone behind.
billpackageinfrastructuremoderateconcernsdemocratsbipartisandemocraticaocprogressivetrillionocasiocortezhouselawmakersreconciliation
2.2k Like