Sen. Ron Johnson says he'd support a vaccine mandate for an 'incredibly deadly' virus but not COVID-19, which has killed more than 613,000 Americans 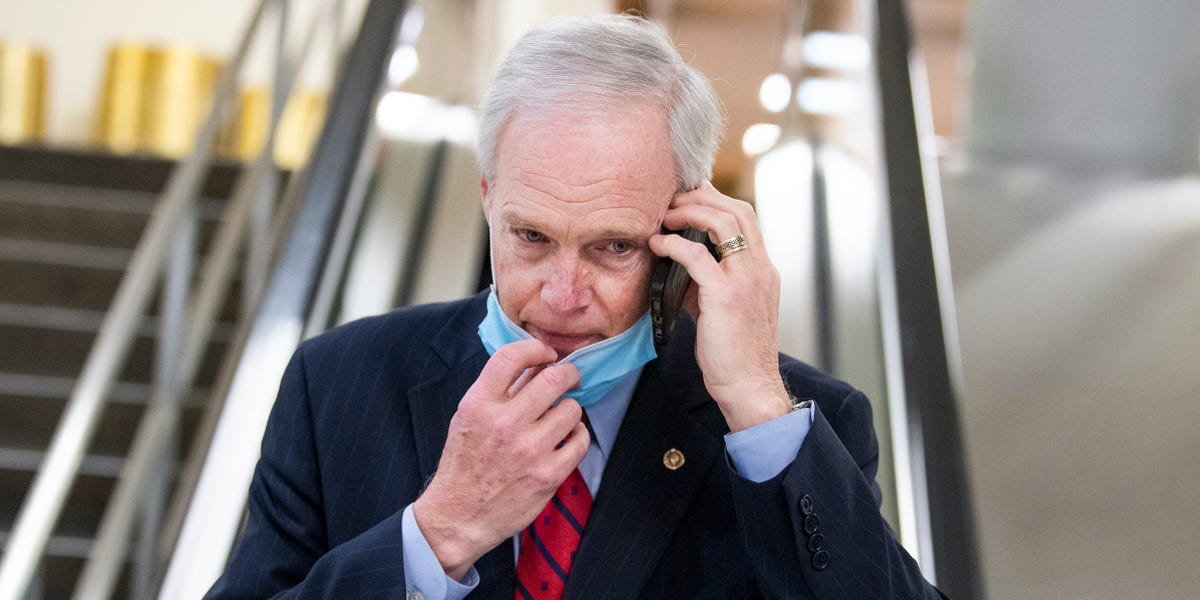 Ron Johson, GOP Senator, stated that he supports a mandate for vaccines only for "incredibly fatal" diseases but not COVID-19.According to Johns Hopkins University, COVID-19 has already killed more than 613 000 people in the US and more that 4.2 million worldwide.Johnson also attacked CDC's decision to change its guidelines regarding masking.10 Things in Politics: Keep up to date with the most recent political and economic news. Loading Something is loading. Click Sign up to receive marketing emails and other offers from Insider.Wisconsin Republican Sen. Ron Johnson said that he supports a vaccine mandate for "incredibly fatal diseases," but he wouldn't support one for COVID-19.Johnson answered "No" during Friday's Fox News interview on "The Ingraham Angle", when Johnson was asked if he would support any vaccine mandate. "Not unless there is an incredibly fatal disease. I'm referring to much higher rates of infection-fatality than what we have with COVID.He said, "We don’t know the final infected-fatality rate but it’s looking like it’s not going to exceed double a bad flu season."Johns Hopkins University believes that COVID-19 has a mortality rate "substantially higher than seasonal flu strains." According to the Centers for Disease Control and Prevention, there were approximately 34,000 flu-related deaths in the United States in 2018-2019.COVID-19, which was discovered in late 2019, has already killed more than 613 000 people in the US, and more than 4 million around the world, according to Johns Hopkins University data. Since the disease's inception in the US, more than 34 million cases have been reported.The number of new cases, hospitalizations and deaths due to the disease has declined since the introduction of vaccines in early this year. However, the highly contagious Delta variant is causing a resurgence in the US.Although the Delta variant can be spread to unvaccinated individuals, experts and data show that vaccines are effective in preventing serious illness and death. The Centers for Disease Control and Prevention director Rochelle Walensky called the current surge an "epidemic of the unvaccinated" earlier in the month.As the number of cases of the disease has risen, mandates for vaccines have become more common over the last week. Reuters reported that Walensky stated Friday that there would not be a federal mandate to immunize Americans.Major US companies like Disney and Walmart announced this week that some of their employees would need to be vaccinated against COVID-19. This week, President Joe Biden announced that all federal employees must be fully vaccinated.Johnson also blasted the CDC in Friday's interview for changing its guidelines this week regarding the use of face masks.Johnson stated that the American public is losing faith and trust in federal health agencies, which Johnson called a "really shameful" situation. Johnson stated that if there was one government part you would like to believe in other than the Defense Department it would be the federal agencies. They have lost the trust and respect of the American people.He said, "Because it's not making any sense." "They are flip-flopping on topics, whether it be masks, and they don't back up their pronouncements by science."This week, the agency stated that people who have been vaccinated should wear masks in areas that contain high levels of COVID-19. This is in contradiction to its May guidance that advised that fully vaccinated persons could remove their masks in all settings.
mandatevirusweeksenhedronfederaljohnsondiseaseincrediblysupportmilliontheyrekilledvaccinatedvaccine
2.2k Like