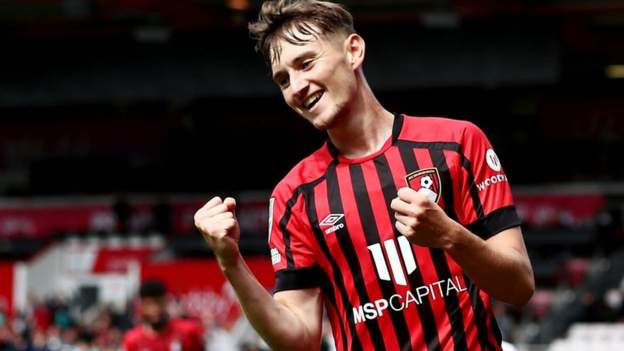 Last update on. From the section League CupDavid Brooks, Bournemouth, had two chances before scoring his first goal in the England domestic season.As the club season began in England, Scott Parker was appointed as new boss of Bournemouth. He led Bournemouth to a crushing first round Carabao Cup victory over MK Dons.David Brooks put the hosts ahead just before the break, and Dominic Solanke's sharp finish doubled the advantage.Brooks, Christian Saydee, and Philip Billing all made it five.The League One Dons, whose preparations were affected by an unwelcome approach from Swansea City to manager Russell Martin, are rarely threatened.Martin's team managed only three shots on target during the entire game.Bournemouth lost semi-finalists in the Championship play-offs last season, but took control after 10 minutes. Brooks was their biggest threat.Franco Ravizzoli, the keeper for Wales, made a good save. Then Billing crossed and Billing wasted his effort. Finally, Billing found his range to score the opener from Gavin Kilkenny’s charming pass.Kilkenny's skill was once more on display as the lead was twice doubled in the second minute of the restart. This was the beginning of a fine team move that saw Brooks and Smith put Solanke up.Bournemouth's dominance was rewarded with three goals in the last 20 minutes.Billing was the one who started the rush. He won possession deep within Dons territory, and shot home.After the good work of Junior Stanislas, Saydee became a substitute for Saydee and made it 4-0. Brooks scored his second goal from close range to complete this scoring.Bournemouth boss Scott Parker:It was very good in terms of result, clean sheet, and five goals."I didn't love some elements, but I loved others. We can always improve, and that is part the process."We have an incredible group of players who are eager to improve and get better. That is a very positive sign."Dean Lewington, MK Dons captain:"We love working alongside him [Russell Martin] with the team, and we don’t want it [his possible departure] to occur.""There's a lot of anxiety. Although I don't wish to make excuses, it's a sad room. Although we feel that we are on the right track and doing the right thing, people still come sniffing. That is the problem."Hopefully, the foundations will be strong enough to withstand this. It is horrible timing. These are the things that we, as players, cannot control."
thingsbrookscherriesbournemouthbreezecarabaoparkersscottteamsecondseasoncupkeynesgoaldonstermsminutesmilton
2.2k Like