Raith Rovers 4-4 Hamilton Academical: Accies fight back from 4-0 down 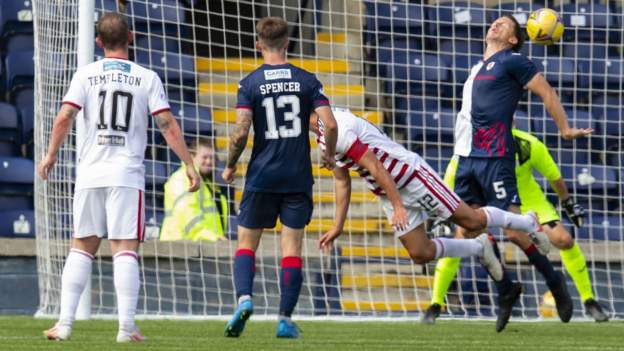 Last update on. From the section Scottish Championship Shaun Want (center) celebrates Hamilton’s dramatic equalizer Hamilton Academical fought back from 4-0 down to save a draw at Raith Scouts, as the Scottish Championship returned. Raith ran rampant for one hour, and were cruising courtesy Lewis Vaughan’s double, Aidan Connolly’s goal, and Dario Zanatta's wonder strike. Hamilton, who was relegated to the second-flight in May, looked good. Brian Rice, David Templeton, Scott McMann, and Andy Ryan were brought in by Brian Rice. His team won with 22 minutes remaining to play through Kieran McDonald. Ryan scored another on 78 minutes before MacDonald got his second five minutes later, setting up a wild finale. Raith was rocked but may have stopped the comeback when Kai Fotheringham stepped in. However, the final decision was made by the Accies, captain Shaun Want grabbing a Reegan Mimnaugh cross, and leading an amazing added-time leveller that went beyond Jamie MacDonald. John McGlynn, Raith Rovers manager: "I have spoken about the rollercoaster ride of ups and downs in a season. I didn't anticipate to experience all those emotions in one match." "We could have been further ahead, as we had two one on ones at 4-0 up. It is very disappointing to lose four goals in just 22 minutes. Two points were lost. It's hard to believe how quickly we lost the goals. Brian Rice, Hamilton Academical head coach: "It's amazing that we got those four goals back. We have just talked about never giving up. All you need is a little luck and a little bit of faith. "You can see the difference when our quality players are on the pitch. Ryan, Templeton, and McMann are fair because they have only been training for one week. They haven't had any pre-season training or game-time."
44 scottish templeton rice raith theyve rovers spoken accies academical scored wee fight ryan 40 hamilton minutes Design Life Style Web Design Development Design Life Style
2.2k Like