James Tavernier: Rangers captain urges fans to back players in taking the knee 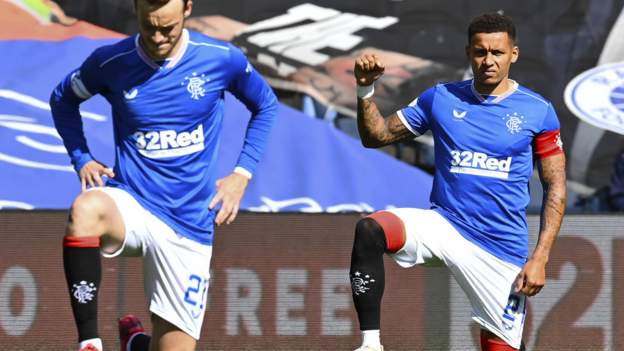 Last update on. From the section Rangers As the Premiership season begins, Rangers players will continue to play. Captain James Tavernier urged Rangers fans to support the players' "symbolic stand against racism" by taking the knee this season. Glen Kamara, a midfielder, was racially abusing by Ondrej Kudela of Slavia Prague last term. The Czech received a 10-game ban from Uefa while Rangers players were also targeted online. Rangers host Livingston to defend their title on Saturday. Tavernier believes that "much more work remains to be done" in order to combat racial inequality. The 29-year old wrote an open letter to season ticket holders: "Whenever our players suffered abuse last season, the support that our fans gave us was unsurpassed." "Many people have made arguments in favor and against certain political organizations. Arguments against their actions and for what they claim to stand for. "I have no interest in all of that, nor do my team-mates and coaching staff. We will all take the knee against racism. Nothing more and nothing less. To highlight racial discrimination, players knelt before most of the Scottish football matches last year. After the May 2020 murder of George Floyd, an American citizen, by Derek Chauvin (white policeman), this gesture was widely used in sport. Fans booed players who took a knee at Euro 2020, which included England's match against Croatia at Wembley. Tavernier said: "At each game this season, and for the 90 minutes, please let the world know why you are such a special fanbase. Support every player who proudly wears the RFC badge. We are as strong and as powerful as we can be."
james rangers knee fans open racial captain tavernier players taking racism stand season strong urges Design Life Style Web Design Development Design Life Style
2.2k Like