Discovering energy saving technologies in the IT sector: Controlling ferrimagnets by voltage 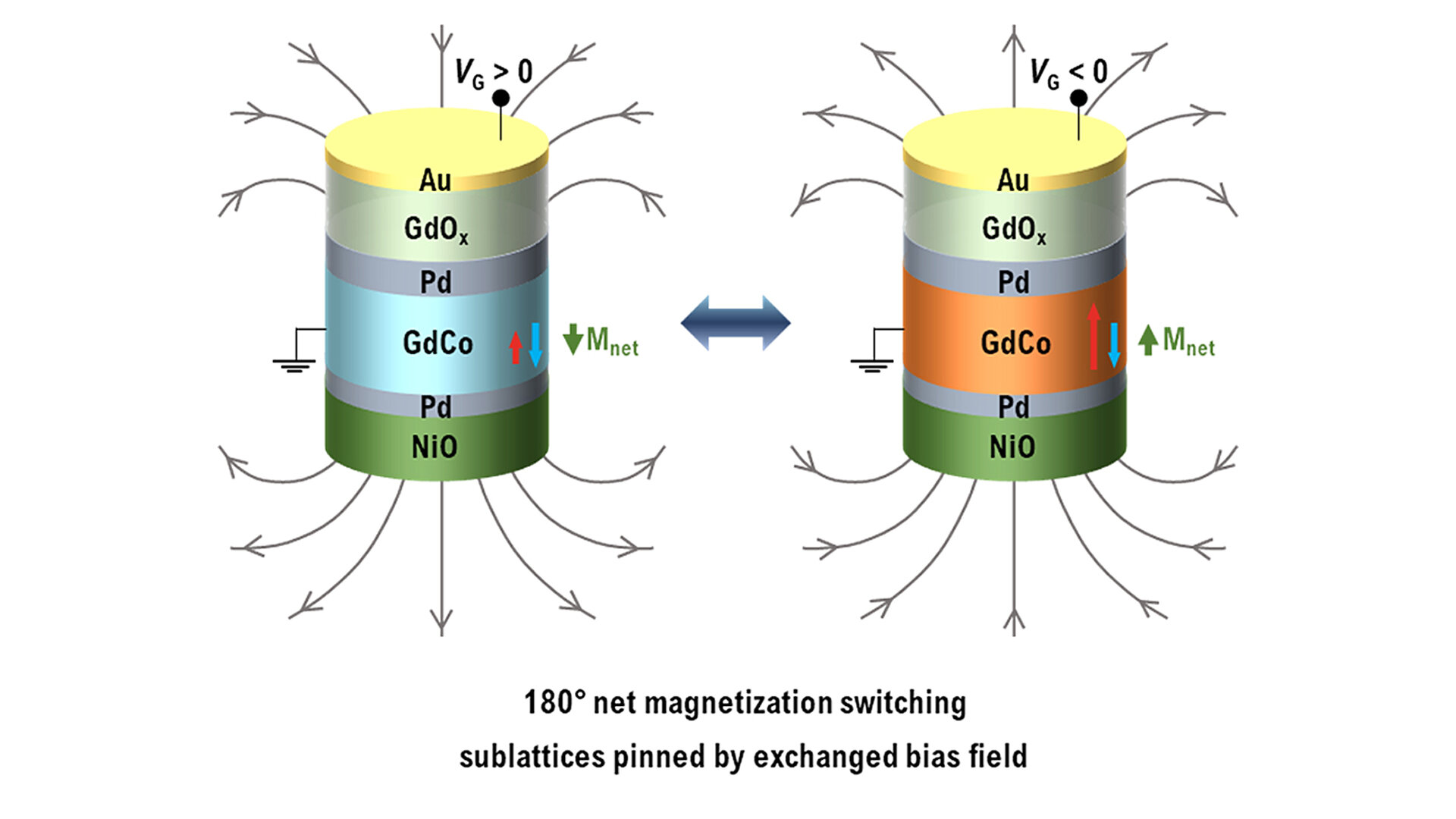 Credit: Chemnitz University of Technology Global challenges include the rapid rise in energy consumption associated with digital technologies. The key issue is the reduction in energy consumption for magnetic data storage devices that are used, among other things, in large data centers. An international research team lead by the Massachusetts Institute of Technology (MIT) and with participation of Prof. Karin Leistner and Dr. Jonas Zehner from the Professorship of Electrochemical Sensors and Energy Storage at the Institute of Chemistry at Chemnitz University of Technology (previously headof the research group Magneto-ionics and Nanoelectrodeposition at the Leibniz Institute for Solid State and Materials Research (IFW) Dresden) now demonstrate 180 magnetization reversal by voltage-induced hydrogen loading into ferrimagnets. This is a significant result, since 180 magnetization reverse by purely electrical fields is difficult to achieve from basic principles. However, it promises a dramatic reduction in energy use for magnetization switching. Because the magnetization of individual bits in data storage and manipulation is often opposed by 180, 180 magnetization switching can be crucial. The study's results could lead to a significant reduction in global data storage power consumption. The research team also included researchers from Chemnitz University of Technology and MIT. Material scientists Dr. Mantao Hung and Prof. Geoffrey Beach, both from MIT, were the leaders. They are experts in spintronics and hydrogen-based magnetoionic devices. These results were published in Nature Nanotechnology, a renowned journal. A new approach Magnetic data storage media such as hard drives and MRAMs (magnetic Random Access Memories) store information through the use of a particular alignment of magnetization in microscopic regions. Electric currents or local magnet fields can be used to adjust the direction of magnetization. These magnetic fields can also be generated by microcoils that produce electrical currents. Both cases lead to energy loss through Joule heating. The control of magnetization using electric fields is an attractive approach to reducing the energy consumption of magnetic information technologies. However, electric field control for magnetization requires either high voltages or is limited to very low temperatures. The research team used the unique properties of ferrimagnets to develop a new method for voltage-induced magnetization switch. Ferrimagnets can offer multi-sublattice configurations with different sublattice magnetizations that are opposite each other. The sublattice contributions are added to create the net magnetization. The technological advantages of ferrimagnets over other ferromagnets are that they can be used for fast spin dynamics, which is a significant advantage. The researchers were able to demonstrate that relative sublattice magnetizations could be reversibly toggled using voltage-induced hydrogen loading/unloading for ferrimagnetic Gadolinium-cobalt. The GdCo was combined to form a solid state electrolyte with a layer of gadolinium oxide, (GdOx), and an interlayer of palladium (Pd). The structure is hydrogenated by applying a gate voltage to it. Protons are driven to its bottom electrode by applying a gate current. Gd magnetization is reduced by hydrogen being introduced into the GdCo structure. This is more than Co. This magneto-ionic effect, also known as the magneto-ionic effect, is stable for more than 10 000 cycles. This could be demonstrated by element-specific Xray magnetic circular dichroism (XMCD spectroscopy) and is the basis of magnetization switching. The researchers added an antiferromagnetic nickel dioxide (NiO), layer to the GdCo/Pd/GdOx structure in order to achieve 180 magnetization reverse without external magnetic fields. They are able to benefit from the "Exchange Bias", or magnetic field effect. This happens when ferri- and ferromagnetic layers come in contact with antiferromagnetic ones. This effect is caused by the coupling between interfacial magnet spins. It leads to the pinning the magnetization direction for the ferro/ferrimagnet. To pin the magnetization direction on a reference layer, the exchange bias effect can be used in magnetic sensors, such as in hard disk drive read heads. The contact with the antiferromagnetic NIO results in a pinching of the direction for sublattice magnetizations for ferromagnetic GdCo. In this instance, the net magnetization changes by 180 during magneto-ionic switch. This is the first time that a pure electric field controlled magnetization reverse has been achieved without the aid of a magnetic field. Professor Karin Leistner, Dr. Jonas Zehner, brought their expertise in the transfer of magnetoionic control to exchange biased systems. Prof. Karin Leistner explains that her group is a specialist in magneto-ionic systems combining aniferromagnetic layer. Jonas Zehner spent six months in the MIT research group during his Ph.D. in the research group of Karin Leistner, IFW Dresden. Jonas Zehner, along with Prof. Karin Leistner, and Prof. Geoffrey Beach, developed and optimized the exchange-bias structure necessary for 180 magnetization reverse. He first combined the magnetoionic model system Co/GdOx and antiferromagnetic NIO. He developed thin film systems using magnetron sputtering. He analyzed the effects of thickness, composition, and layer sequence on the exchange bias and magnetoionic control. A magneto-optical Kerr Effect setup was built to measure the magnetic properties of hydrogen loading. These experiments revealed that the exchange bias effect is stabilized by an ultrathin Pd between the GdCo & the NiO. Explore further The demonstration of exchange bias switching in antiferromagnet/ferromagnet structure More information: Mantao HUANG et al., Voltage control for ferrimagnetic order, and voltage-assisted write of ferrimagnetic spun textures, Nature Nanotechnology (2021). Information from Nature Nanotechnology Mantao Huang and colleagues, Voltage control for ferrimagnetic order, and voltage-assisted write of ferrimagnetic spun textures, (2021). DOI: 10.1038/s41565-021-00940-1 Chemnitz University of Technology
magnetization saving voltage bias research exchange sector magnetic 180 ferrimagnets prof technologies energy controlling discovering layer magnetoionic control Design Life Style Web Design Development Design Life Style
2.2k Like

Scientists develop principles for the creation of an 'acoustic diode'

'Fool's gold' may be valuable after all